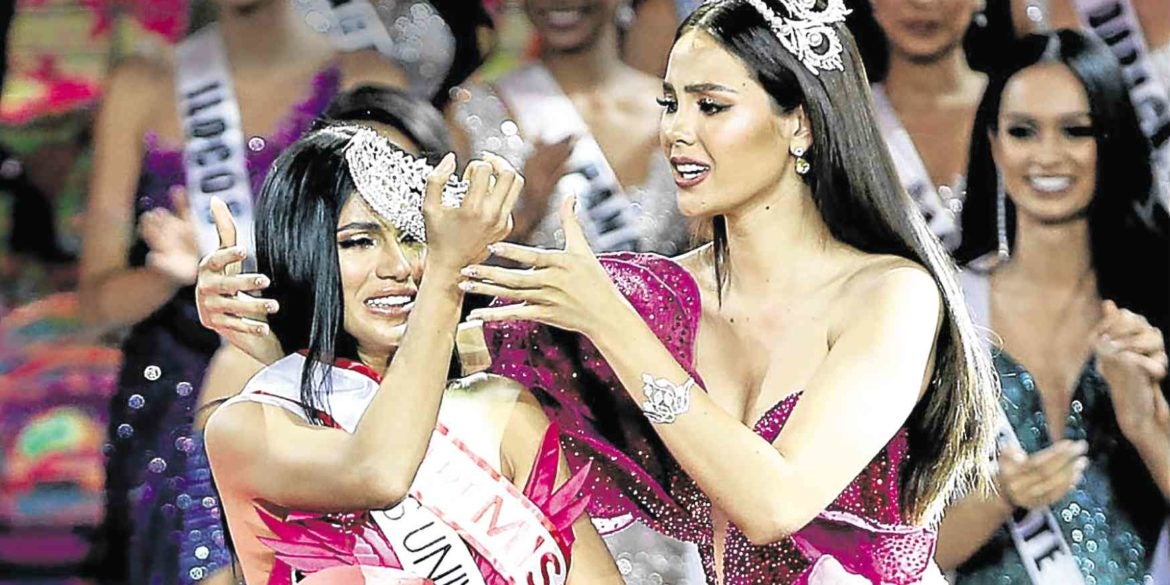 UNEASY CROWN For a moment, the crown falls off the head of 23- year-old Gazini Ganados, Binibining Pilipinas-Universe 2019, as she is assisted byMiss Universe 2018 Catriona Gray during coronation on Sunday night at Araneta Coliseum in Quezon City. —RICHARDA. REYES

Cebuana model is PH candidate for Miss U

MANILA, Philippines — It was a double celebration for six Binibining Pilipinas contestants, who earned their crowns at Smart Araneta Coliseum in Quezon City where the finals were staged on Sunday evening, three days before the Philippines marks its 121st Independence Day.

With independence in mind, the winning beauties said the youth should honor the Filipinos who have fought for the country’s freedom.

Gazini Ganados, 23, a model and pageant veteran from Talisay, Cebu province, received the Miss Universe-Philippines crown from reigning Miss Universe Catriona Gray after being chosen from a field of 40 candidates in ceremonies that dragged for five hours and ended past midnight.

“The youth should not take their freedom for granted. Keep being better for our country, for our nation to be the best nation,” Ganados said.

Binibining Pilipinas-International Bea Patricia Magtanong, a lawyer and pageant rookie from Bataan province, said the youth should be socially aware “to know what’s going on in our country.”

“It’s important for our youth to know our history, so that they can make informed decisions about their political beliefs. The youth can honor our independence by being aware of our history,” Magtanong said.

Muslim Resham Saeed from Maguindanao province, who was named Binibining Pilipinas-Supranational, said young Filipinos should use social media to spread the news about the country and “continue to strive for the independence that we have.”

“It doesn’t have to be anything dramatic or huge. Just any way that they’re great at. Be proud of all the work that they do,” she said.

Binibining Pilipinas-Intercontinental Emma Mary Tiglao of Pampanga province, agreed with Lo, saying, “You can serve your country in small ways.”

“We should learn our history, because we can learn from the past and use it in the present to be prepared for the future,” she added.

Laguna’s Leren Mae Bautista, Binibining Pilipinas-Globe winner, said the Filipino youth should “always remember the things the heroes sacrificed for our freedom, for our independence.”

Colors of the flag

First runner-up Maria Andrea Abesamis, a visual artist from Pasig City, advised young Filipinos to “understand the colors of the flag because it represents different things.”

The six winners are tasked with following up a banner year for the 55-year-old beauty pageant after the success of their predecessors in the global arena.

Aside from Ganados, Tiglao is likewise burdened with the mission of securing a back-to-back victory for the Philippines in the Miss Intercontinental pageant, after Karen Gallman earned the Philippines’ first crown in the 47-year-old global tilt’s 2018 edition.

Magtanong will be aiming to improve the second-place finish of Ahtisa Manalo in the Miss International pageant in Japan later this year.

Both Saeed and Bautista will seek the country’s second win in their respective international assignments. Their predecessors finished in the semifinals.

Each of them earned half a million pesos from Binibining Pilipinas Charities Inc. (BPCI) with their titles.

The contestants had been engaged in numerous activities for more than three months, including the crucial prepageant competitions that determined the 25 semifinalists.

Those who survived the first cut competed in the swimsuit and gown segments during the coronation ceremonies, before being trimmed to the top 15 who proceeded to the grueling question-and-answer round.

Ganados was also proclaimed best in evening gown and Miss Photogenic. Magtanong was best in swimsuit and Miss Megawide.