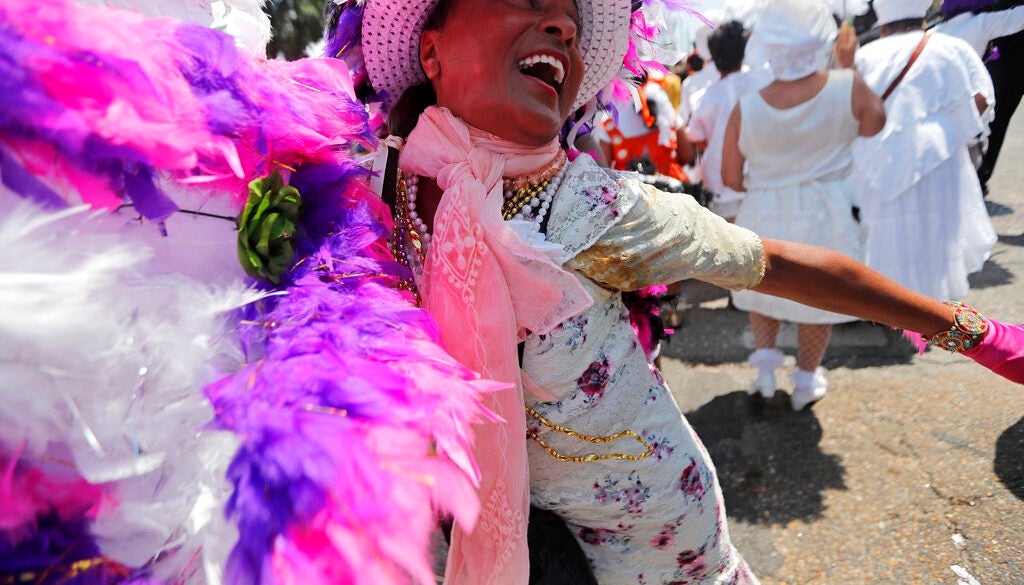 Jennifer Jones dances in a jazz funeral procession for Leah Chase, as it goes from St. Peter Claver Church to her restaurant "Dookie Chase's" in New Orleans, Monday, June 10, 2019. Fellow chefs, musicians, family and friends were among hundreds of admirers who filed through the church on Monday to pay last respects to Chase, the "Queen of Creole Cuisine" who ran a family restaurant where civil rights strategies were discussed over gumbo and fried chicken in the 1950s and '60s. (AP Photo/Gerald Herbert)

NEW ORLEANS — For celebrated Creole chef Leah Chase, the goodbye had all the ingredients of a typical New Orleans sendoff: warm reminiscences and mourning mixed with a Mardi Gras-style celebration of her life.

Fellow chefs, musicians, family and friends were among hundreds who filed through a New Orleans church on Monday to pay last respects to Leah Chase, who ran a family restaurant where civil rights strategies were discussed over gumbo and fried chicken in the 1950s and ’60s. She died June 1 at age 96.

The rosary and funeral Mass at St. Peter Claver Catholic Church was marked by spirited gospel from the choir and a soulful rendition of “Peace in the Valley” from longtime New Orleans musician and singer Deacon John.

Afterward, a brass band, pallbearers and members of the Zulu Social Aid and Pleasure Club slow-walked beside her hearse as it drove the few blocks to Dooky Chase’s restaurant — her last trip to the place where she earned renown as a chef, civil rights icon and patron of the arts.

Dirges gave way to an upbeat “I’ll Fly Away” and, as the procession approached, vendors sold snacks, water, beer and cocktails from streetside trailers or ice chests on wagons.

Before the funeral, Ti Martin, co-proprietor of Commander’s Palace restaurant and a member of New Orleans’ famed Brennan family of restaurateurs, stood in a line that snaked around the block. She was among a diverse crowd that included politicians, notable chefs and musicians, including Marsalis family patriarch Ellis Marsalis.

“I don’t know if God realizes he’s about to gain 20 pounds,” Martin joked, “I can count on one hand the number of people who inspire me as much as this lady. And I wouldn’t need all my fingers.”

“I started eating in the restaurant in the ’60s when I was a little kid,” recalled Jonathan Bloom of New Orleans, who said his mother was a friend of Leah Chase.

State Sen. J.P. Morrell said he met and learned from an older generation of politicians while sitting at Dooky Chase’s — and heard a multitude of stories. “It took very little to prompt her to go into very lengthy stories about all the different people,” Morrell recalled. “She remembered and shook hands with every single person that came through her restaurant.”

“It’s impossible to overstate what she meant to our city,” Mayor LaToya Cantrell said during a rosary service ahead of a midday Mass.

The mournful-turned-festive march to Dooky Chase’s was followed by a motorcade to a local cemetery. After that, there was to be a traditional New Orleans “second line” parade — with watchers falling in behind the procession — to the New Orleans Museum of Art.

Monday’s was the last in a series of goodbyes to Chase. A brass band led a parade by the restaurant last Monday, and a public memorial was held at Xavier University on Saturday.