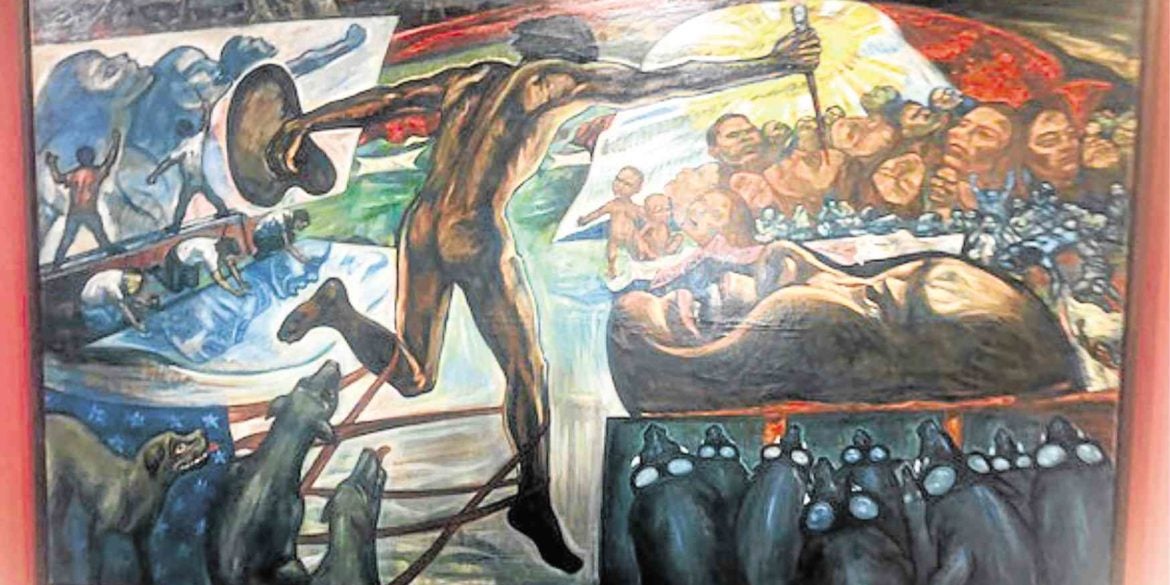 The National Gallery Singapore (NGS) has opened an international exhibit of activist art works across Asia, spanning the Cold War up to the 1990.

“Awakenings: Art in Society in Asia 1960s-1990s” surveys postwar Asian history as seen through the powerful imagination of artists.

Featuring 142 socially provocative artworks by more than 100 artists from 12 countries in Asia, the exhibit is jointly organized by NGS, Museum of Modern Art Tokyo, Museum of Modern and Contemporary Art Korea, and Japan Foundation Asia Center.

The exhibit shows how artists become catalysts for change in China, the Philippines, Indonesia, South Korea, and Taiwan and elsewhere.

“Awakenings” surveys how Asian avant-garde art and other experimental aesthetic strategies went hand in hand with challenging the establishment and fostering civil and democratic rights.

Those hard-won rights, curator Adele Tan observed, appear now to be in danger.

“Perhaps even more than a historical survey, these works seem germane to the present,” she said. “They speak to us where we are today.”

Perhaps particularly timely would be “Reptiles” by China-born installation and performance artist Huang Yong Ping, which was originally presented in May 1989 in Paris during the ” Magiciens de la Terre (Magicians of the World),” the first major international exhibit addressing globalization.

In the following month, the Tiananmen Square incident took place and Huang wasn’t able to go back to China. He’s now a French citizen.

Coincidentally the world is marking this year the 30th anniversary of Tiananmen and its suppression by Communist authorities.

Coincidentally too the exhibit opened amid rallies by thousands in Hongkong over a proposed extradition law in parliament. Critics of the the bill have said that Beijing may use it to extradite dissenters from the special administrative region and effectively crack down on dissent as what happened in Tiananmen 30 years ago.

Made of paper pulp and iron, “Reptiles” compares and contrasts the East and West by its turtle-shaped traditional Chinese tombs made of paper pulp from French newspapers that were ran through washing machines.

Arranged along North-South axis on the basis of geomancy principles, the installation interrupts the flow of exhibit space, representing rupture and discontinuity.

An older work in the NGS exhibit is “Frog King Kwok,” a performance and installation art staged in 1979 in which the artist tried to symbolically collect people’s fears and anxieties in plastic bags and tied them around Tiananmen Square and the Great Wall.

Meanwhile “Safely Maneuvering Across Lin He Road” is a 1995 video documentation of Lin Yillin’s site-specific performance in which he piled concrete blocks on a busy road in Central Guangzhou, so that he interrupted traffic and made a critique of China’s rapid urbanization and commercialization.

Co-curator Charmaine Toh said that works in the exhibit were chosen by how much they resonate with one another.

In some cases like “Reptiles” and Chinese protest art before Tiananmen, the works seemed prescient, like Philippine social realist Renato Habulan’s “Drama of the Nations,” a 1982 oil-on-canvas.

Part of the collection of NGS, the large work (213.4 x 152.4 cm) is along the muralist tradition of Carlos “Botong” Francisco. It’s a dramatic, almost theatrical multi-focus depiction of the injustices suffered by the people during the authoritarian Marcos regime, with the masses on top, the struggling workers in the center, and protesters in the bottom.

Habulan includes himself at bottom left, as a protester on behalf of workers’ rights and victims of violence.

A year after the work, senator Benigno Aquino Jr. would return to the Philippines and his assassination would unleash forces that would depose the dictator Ferdinand Marcos.

The popular uprising that ousted the strongman is tackled by Pablo Baens Santos in “Manifesto,” which is part of the NGS collection.

Likewise prescient is Jose Maceda’s “Cassettes 100,” a documentation of the site-specific performance mounted by the music scholar in 1971 in which he asked 100 people to each play a cassette recording of ethnolinguistics music all at the same time at the lobby of the Cultural Center of the Philippines.

The racket was magnified when rolls of toilet paper were strewn across the lobby, and the ensuing chaos seem by now an early manifestation of the mixed feelings people have about the CCP because of its Imeldific origins.

Philippine artists seem particularly prescient in challenging violence against women, as can be seen from the NGS’s strong suite of works on the issue by  Santiago Bose, Imelda Cajipe Endaya, Brenda Fajardo and Julie Lluch.

Curators said the exhibit should show that Asian artists were in the forefront of critical changes in the last 50 years.

Rather than stay in the silence of his atelier, the Asian artist during the turbulent 1960s up to the chaotic 1990s found himself thrust into the public space to engage with social concerns.

The title of the exhibit therefore refers to “artistic awakenings” or “heightened awareness” of the intersection between art and society.