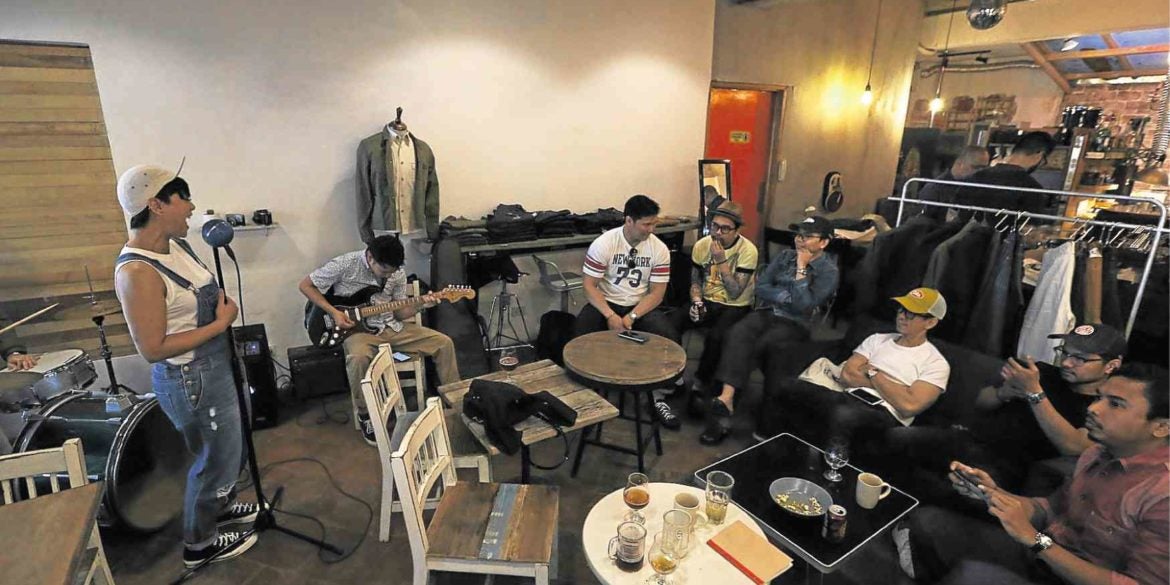 A scorching Saturday afternoon. A small cafe in a nondescript corner of Makati.

The Indonesian girl in the blue overalls is singing Noel Gallagher’s evergreen anthem, “Don’t Look Back in Anger,” with just electric guitar and drums behind her, while the appreciative, mostly millennial audience sip their iced macchiatos and craft beers.

At some point, they’ll turn their attention to the merchandise, nonchalantly piled on a shelf and hanging from a single rack: deep-indigo denim jeans and jackets, such as you might have found in a general store in the late 1950s; military-style jackets and trousers in brown canvas and green herringbone twill; a chore coat in a curious thick cotton fabric that you later learn is sashiko, the same material used for judo uniforms.

All in all, pretty chill for a retail experience.

The event is a pop-up for Leon Denim, a tiny guerrilla outfit that makes workwear from Japanese selvedge denim, using vintage machinery and traditional sewing methods.

Apart from a few outlets in small clothing boutiques, the once-a-month pop-up store held in different locations is one of the ways Leon touches base with its small but growing clientele seeking a stylish alternative to the soul-deadening sameness of fast-fashion mall brands.

“Our clientele is a niche community looking for nonmainstream goods,” says Iver Aldas, one of Leon’s co-founders. “These are people who are into quality, and also looking to lessen the pollution from the fashion industry by choosing products that are made in a more traditional, more tedious process. These are clothes that you buy and wear for the rest of your life—that’s the goal of the brand. The way they’re made, you can expect to wear them for a long time.”

It’s made from raw 15-oz Japanese selvedge denim from Collect Mills in Okayama Prefecture. (Japan makes nearly all the selvedge denim in the world, rope-dyeing the yarn with natural indigo and weaving the fabric with vintage shuttle looms, resulting in a more richly textured fabric than mass-produced denim, hence the premium pricing.)

If you opt for the raw, rather than the sanforized version, you’ll have to buy them a size or two larger because they’ll shrink to their final size only after two or three washes.

If you want them faded, you’ll have to wait, since hardcore denim fanatics wash their jeans only every six months or so, if at all.

And if you want them distressed, you’ll have to do it yourself by practically living in them until they develop the unmistakable patina that only raw selvedge denim can produce.

“People are getting tired of instant gratification, disposable everything,” says Jake Antig, another of Leon’s cofounders.

“With our denim, you get it raw, you get it dark, and you see the fades only after you wear it a long time. It takes some effort and dedication to enjoy the result, but it’s not really about the result—it’s about the process.”

Denim cultists tend to obsess with details such as authentic brass “donut” buttons and hidden pocket rivets. They insist on using an antique Union chain-stitching machine if they opt to hem their jeans.

They talk about “slub” and “nep,” which are textural qualities of the fabric. They appreciate “whiskers” and “honeycombs,” which are fade patterns at the crotch and knees that emerge after a suitable period of wear.

Expensive but they last

Leon Denim jeans cost two or three times your average pair of branded mall jeans, but they don’t fall apart after a couple of cycles in the washer/dryer. In fact, it could take a couple of years or more before they start showing the proper fades prized by denim aficionados.

“It all ties in with sustainability—making things slowly, by hand, in small batches,” says Antig. “There’s a movement of people who want to remember how things were made before. There’s some nostalgia involved.”

It’s a novel experience for young people who’ve known only fast fashion. “They laugh because their parents get it,” says Antig.

Indeed, the raw denim revival isn’t exclusively millennial. Quite a few enthusiasts are older gentlemen who remember “the old days” when they wore PX-bought shrink-to-fit Levi’s 501s still wet from the tub so they’d dry to a custom fit.

Aldas and Antig believe Leon Denim is neither fashion nor anti-fashion.

“It’s more of a lifestyle,” says Aldas. “People who are into vintage clothing, who are big fans of military and workwear, those are the people who go to us.”

Now on its fifth year, Leon has seen a slow but steady growth in its customer base. “When we started out, we were selling mostly to our friends,” he says. “Now we get online orders from Italy, Sweden—we just got one from Bogota.”

So far, Leon is the only local manufacturer of selvedge denim clothing in what is, after all, a narrow market niche.

Apart from a couple of outlets that carry the brand, Leon Denim relies on pop-up events, such as the Saturday get-together, and even one-on-one meetups, to reach their clientele.

“There are big selvedge denim communities in Japan, Indonesia, Malaysia and Thailand,” says Aldas. “The brand is starting to get some recognition abroad. We want to make our products even better, so we can represent the Philippines and put it on the raw denim map.”