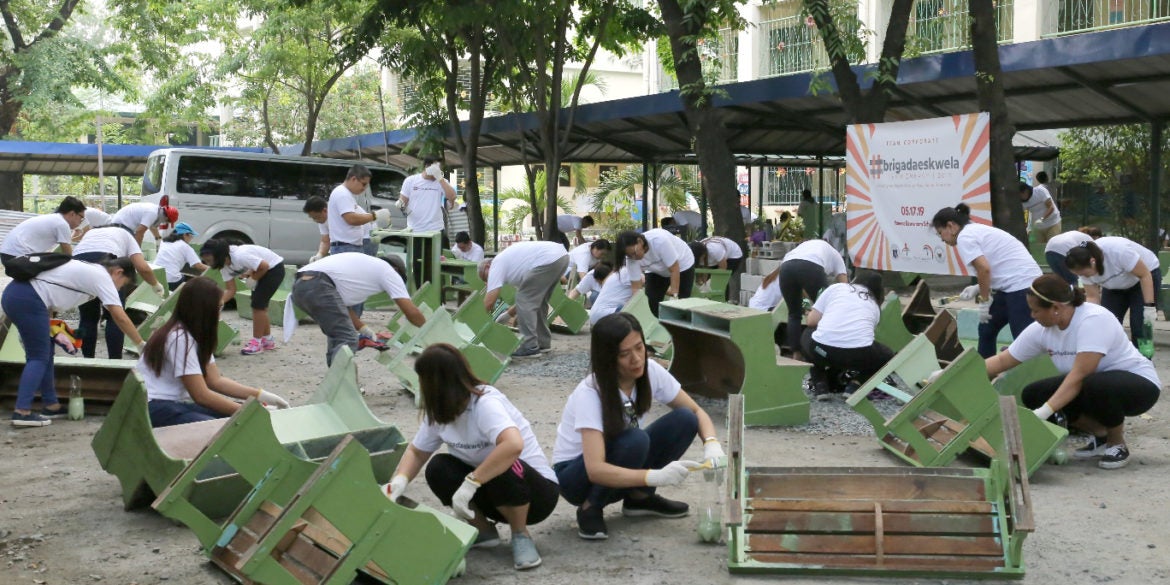 Wandering aimlessly around the city, especially during the holiday season, some members of the Badjao Tribe have resorted to a life of begging in the streets.

Most city dwellers are used to encountering them inside jeepneys, handing out small envelopes in the hope of receiving some loose change, or singing a traditional song while playing a makeshift drum made out of old, recycled materials. The women carry small children wrapped close to their bodies by colorful, albeit dirty fabric, begging for money or food – just enough to get them through the day with something to fill their empty stomachs.

Their lives in the urban area are a far cry from what they were used to in their former homes at the coastal areas of Mindanao not too long ago. There, they were known as proud sea gypsies who led a nomadic lifestyle through sea trade.

Discrimination, loss of livelihood, and the continuing violence in some parts of Mindanao have driven many members of the Badjao tribe to migrate mainly to some of the big cities in Luzon.

From the streets to school

In Lucena City in Quezon, in a coastal barangay called Dalahican, the members of the Badjao Community in this area appear to be different from those usually encountered in most cities. The children go to school, the younger ones attend an informal daycare and are fed daily, and the parents are busy with their livelihood.

This was possible through TeaM Energy Foundation’s (TEFI) support together with a Catholic organization. Through the education programs, TEFI—the social development arm of TeaM Energy Corporation–is able to support the schooling of 18 elementary students last school year from the Badjao Tribe in Barangay Dalahican through the provision of daily allowance and school needs like uniforms, books, school supplies, and shoes.

Meanwhile, the younger Badjao children aged two to four attend an informal daycare center exclusive for the children of the community with Teacher Myrna, who teaches the young children the alphabet, numbers, and colors. There is also a lot of singing and dancing in Teacher Myrna’s class, and by lunch time, the children are fed with nutritious food as part of the feeding program.

“The members of this Badjao Tribe have regained their confidence and sense of dignity,” shares Teacher Myrna. “They no longer beg, and the children look forward to going to school every day. Their parents are also very supportive.”

For Apple Carnatero, working inside a power plant is a dream come true. A scholar of the Golden Seeds of Knowledge Scholarship Program of TeaM Energy, she now works as an Electrical Technician under the Maintenance Department of Pagbilao Power Station, a 735 megawatt (MW) coal-fired power plant in Quezon Province.

“Through the scholarship, I have the means to become an Electrical Engineer,” shares Apple. “It has always been my dream to work in the power industry, and I am grateful for the opportunity given to me by TeaM Energy. This has changed my life.”

To date, a total of 72 scholars graduated from college through the scholarship program.

Before the 12 noon lunch bell rings, students of Cacao Elementary School (CES) proceed to fetch water from the poso or hand pump of the school’s neighboring house so they can wash their hands and have water to drink.

This used to be the daily scene four years ago at CES in Sual, Pangasinan where, since the school was established, no potable water was available for the teachers and students to drink, wash their hands, water the plants, and clean the toilets.

Through the Safe Water for Schools Program of TeaM Energy, together with the Department of Education, a complete safe water system was installed inside the CES campus in 2015. This includes a two-horsepower water pump, an 82-gallon capacity pressurized water tank, along with several pipes; 49 faucets which were installed inside the classrooms, the principal’s office, and in front of the school buildings; and hand washing areas.

“Good hygiene ensures that students stay healthy and don’t miss classes because of water-borne diseases,” explains Greggy Romualdez, External Affairs Head of TeaM Energy. “Through the safe water systems installed in these schools, diseases can be prevented and school attendance will improve.”

Teachers are Students too

Learning should be a life-long process. Especially for teachers who are responsible for shaping the minds of the future generation.

To strengthen the teaching competencies of public school teachers in Pagbilao, Quezon, TeaM Energy and the Local School Board of DepED Pagbilao District partnered in order to provide a scholarship program for the teachers.

Through the program, a total of nine teachers completed their Master’s Degrees and are still teaching in their respective public schools.

The greatest divide in the Philippines is not the distance created by seawater in between its islands; but by the societal divides brought about by unequal access to basic services like health and education, and the inequality of income distribution among Filipinos. Simply put, it is the huge divide between the rich and the poor.

In order to bridge these societal divides, the Asian Institute of Management (AIM), together with TEFI, established the AIM-TeaM Energy Center (AIMTEC) for Bridging Leadership which aims to equip leaders with different leadership knowledge, skills, and values to solve the country’s complex problems. Formal training from respected and experienced academicians and mentoring from leaders recognized in different sectors will help them understand the complexity of challenges and address the system that creates this output, bring diverse stakeholders to co-own the issue and its solution, and lead the process of coming up with new institutional arrangements and solutions to addressing complex challenges.

Former Armed Forces of the Philippines (AFP) Chief of Staff Lt. Gen. Carlito “Charlie” Galvez, who is also a Bridging Leaders Fellow, inspires change through the AFP’s Leadership Development Center which utilizes the Bridging Leaders Framework within its system.

“We want to solve problems without shooting guns,” revealed Gen. Galvez in a speech during the Bridging Leadership International Colloquium last December. “Problems of conflict cannot be solved militarily. Instead, going to the community, mentoring LGUs and barangay officials, understanding, and connecting with our fellowmen will solve many issues.”

The youth can also be a part of the program through the Future Bridging Leaders Program where they can properly hone their leadership skills through change projects which they will implement in their respective areas and organizations.  Reycel Hyacenth Bendaña, better known as Hya, is a fellow of the AIMTEC’s 2nd Future Building Leaders Program, and was selected as Ateneo De Manila University’s Class Valedictorian for 2019.  Her Bridging Leadership change project was among the program’s top 3 projects. Her project “Hilab, Hilom, Halinhan” (Rise, Recover, Reform) intends to equip student governments (SGs) in various secondary and tertiary schools to prevent and respond to cases of sexual violence in their institutions. The project will help SGs provide frontline services that harassment victims can access for assistance and counseling.

Dreams built inside the classroom

According to the Department of Education, 27.21 million students went back to school this new school year 2019 to 2020. And just like every school year that has passed, the lack of classrooms has always been a prevailing problem in the country’s public school system.

In the past, some of the strategies implemented to remedy this problem included splitting classrooms in two using wall dividers, holding classes at the school yard or under trees, and dividing the classes into morning, afternoon, and evening sessions even at the elementary level.

Unfortunately, these solutions did not really solve the problem and the learning environment continued to become not conducive for learning.

These classrooms are fully furnished with the necessary classroom essentials – armchairs, blackboards, lighting fixtures, and electric fans. The classrooms also have restrooms that are complete with water, sanitation, and hygiene facilities.

“TeaM Energy has identified education to be one of our priority programs,” shares Ricky De Castro, Executive Director of TEFI. “The classrooms built in partnership with other private organizations and the local government help serve a very vital need of the students in the communities.” 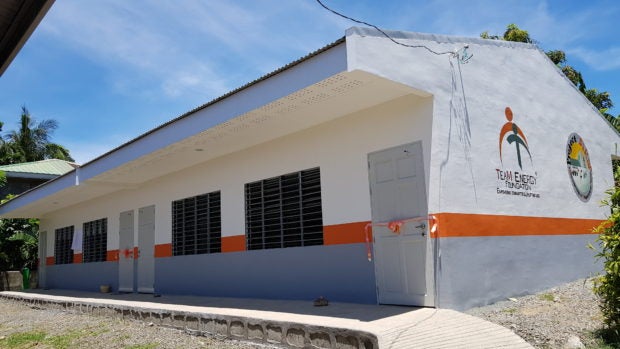 Through small but significant measures

In General Nakar, Quezon, TeaM Energy distributed 1,111 units of solar lamps to students of 14 off-grid public schools in the town. The solar lamps, which can last for five to eight hours in operation, can be used by the students when studying for their lessons at home during the evening.

Each year, TeaM Energy employees also volunteer during Brigada Eskwela, Department of Education’s nationwide initiative that mobilizes the general public including non-government organizations, and businesses to do minor repairs and cleanups in public schools in preparation for the start of the school year.

In a nation where achieving quality public education has been a perennial challenge, every little help from any individual counts – may it be sponsoring one child to school, donating school supplies, or simply volunteering to paint desks during Brigada Eskwela.

For TeaM Energy, investing in programs for education is investing in the future. As we have seen, the collective effort from the government, civic groups, businesses, and individuals raises the bar for quality public education, which will not only benefit the Filipino youth, but the whole nation as well.