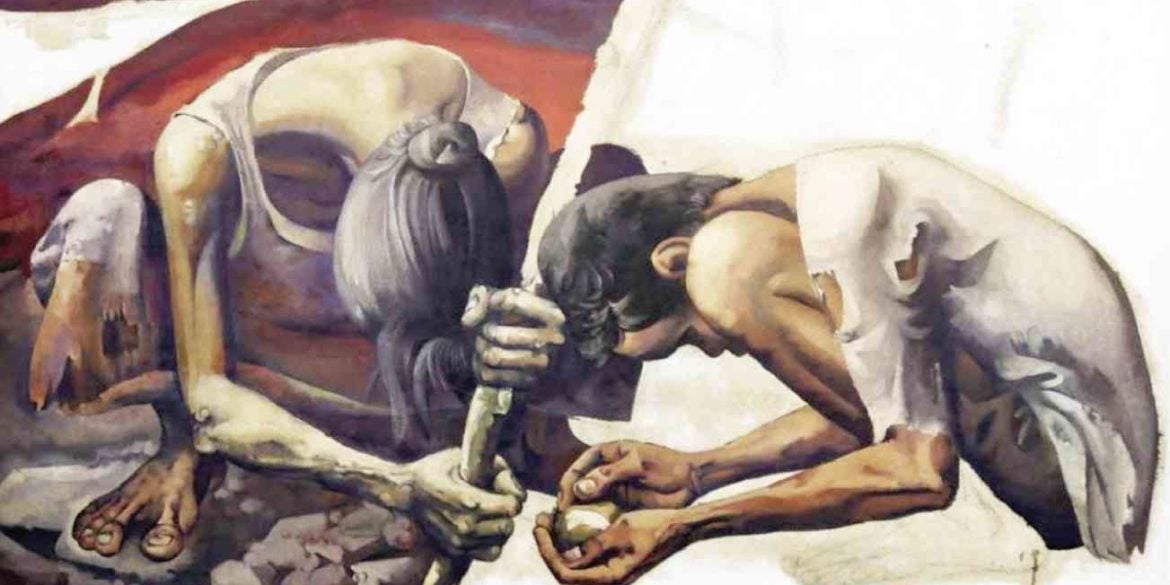 GIFT TO MARCOSES? “Camote Diggers,” an oil-on-canvas painting done by National Artist Carlos “Botong” Francisco, was sold for P23.4 million in Saturday’s auction at Leon Gallery. Its consigner and buyer, however, agreed to donate the artwork to a still unnamed museum. A law office has claimed the unfinished painting was delivered by Francisco’s wife as a “gift” to President Ferdinand Marcos and his wife Imelda at Malacañang a few years after the artist’s death in 1969. —CONTRIBUTED BY LESTER BABIERA

“To avoid further controversy and the possible politicization of this great masterpiece,” said the gallery director, Jaime Ponce de Leon, in an official statement released on Sunday, “the person who consigned the work to auction has generously decided to donate Botong Francisco’s ‘Camote Diggers’ to an institution.”

The final choice of the museum will be announced in time.

The statement continued: “The consignor, who wishes to remain anonymous,” has nominated Leon Gallery through its director “to act on his behalf.” The buyer, who also is not named — auction houses are bound by confidentiality — has agreed.

This oil-on-canvas painting (86 x 147 centimeters) done by Francisco in 1969 before his sudden death gained controversy last week, days before the auction, after the gallery received a letter from Arnel Victor C. Valeña of Valeña Law Office on June 13, wanting to know how the painting landed at Leon Gallery.

Valeña, who claimed to represent the Francisco heirs, wrote, “Our client learned about the auction and requested our assistance in obtaining information from you about how the painting came to be in your possession.”

The letter stated that Botong’s wife, Rosalina, with children Rodolfo and Carmela, delivered the unfinished painting to President Ferdinand Marcos and his wife Imelda at Malacañang a few years after Francisco’s death in 1969.

“The painting was supposed to be a present,” the letter said, “a gift as a way of thanking the government through the Marcoses for all the support given to their family through the years.

“As far as my clients know and expect, the painting should be in Malacañang, and they are grieved to know that it is not.”

Ponce de Leon noted, “We find the timing of your request curious given that the same painting had been previously lent to the Yuchengco Museum for a substantial period of time with no adverse claim of ownership surfacing.”

A few days before the June 22 auction, the live wire that is the Philippine art circle began to act up with talk that an Imelda Marcos artwork was to be auctioned, and on Sunday, GMA online reported that the Francisco work that was a gift to the Marcoses and was supposedly kept at Malacañang had been auctioned off. And the photo showing Ferdinand and Imelda Marcos with the painting at Malacañang surfaced.

Sources told the Inquirer that the consignor bought the Francisco painting in 2004 from a seller who was the son of a government official. The consignor, we learned, vaguely remembered seeing something similar to the painting at Malacañang in the late ’70s or early ’80s, in a security guard room just outside the office of then President Marcos.

Before buying the painting, the consignor asked Imelda—through a common friend, not directly—if the former first lady remembered the Francisco painting. Imelda reportedly said no, she didn’t recall the painting at all.

So the consignor decided to buy the painting, has kept it in his collection for years, and has allowed it to be exhibited, until he decided to sell it in the June 22 Leon Gallery auction.

In a phone interview with the Inquirer, Ponce de Leon noted that the Francisco painting must have had a long trail of ownership since the ’80s.

He added that artists close to Francisco would talk about how the painting had been given as gift by the Francisco widow and heirs to the Marcoses after the artist’s death, in gratitude for the help extended by the Marcoses to their family.

The painting’s most recent owner, who would turn out to be the consignor in last Saturday’s auction, apparently had bought it on the market.

The question is, how did the Francisco painting end up on the local art market — from Malacañang, if indeed that and the one in the photo are the same?

But then again, so many of the Marcoses’ vaunted possessions, from paintings to jewelry, have been landing on the market here and abroad through the decades. The case of the Francisco painting in Leon Gallery’s auction is nothing new.

What is new is — this is the first time, according to Ponce de Leon, that an artwork successfully auctioned will be donated to a museum.