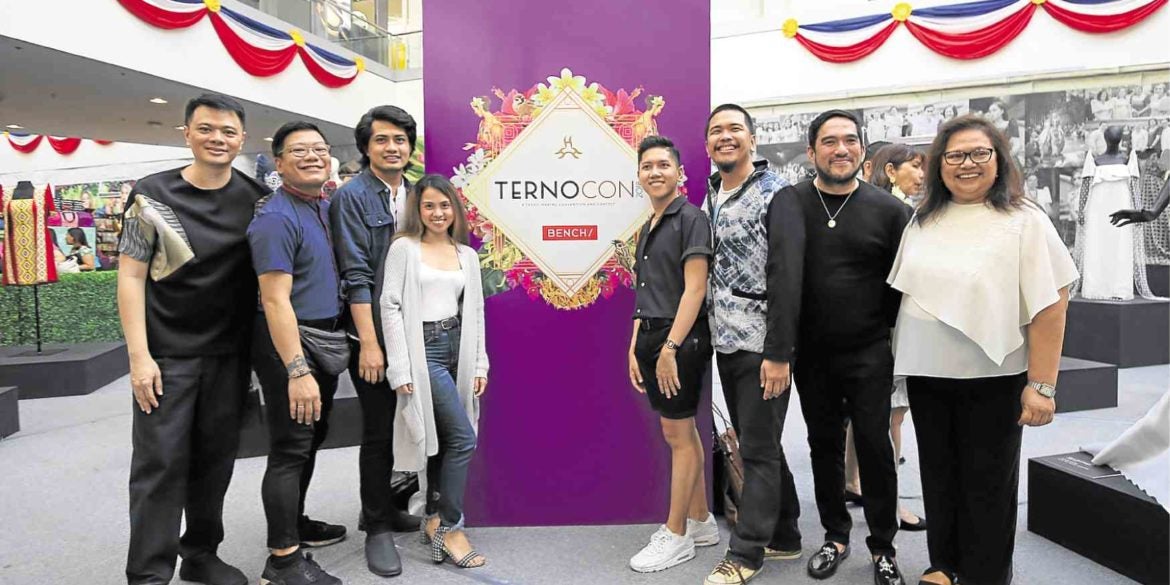 ‘Don’t intend to be great! Make it wearable’—Inno Sotto

The Ternocon, the exclusive competition-exhibit-cum-fashion show held the last two years, has been hugely successful.

With the terno now in vogue, Ternocon has created a platform for emerging designers, or fashion design students, to know our national dress and how to sew it, and for people to appreciate it.

The story goes back to 2003, when Bench had an exhibit and terno ball at the Metropolitan Museum in Manila, and sparked some interest in it after it lost prominence around the time of the People Power Revolution.

This, said Gino Gonzales, is part of the terno’s storied past, and so is the fact that in 2015, he and Mark Lewis Higgins collaborated on a book “Fashionable Filipinos: An Evolution of the Philippine National Dress in Photographs, 1860-1960.”

But, Gonzales added, “It wasn’t enough. We were thinking of a better way to solve this problem, that the terno was not getting the attention it deserved, and we came up with the idea to do workshops.”

They set up the test module at Ateneo de Manila University,   with around 30 students, and suddenly, “it wasn’t some abstract concept anymore,” as Gonzales put it.

To reach out to designers in different regions, they set up workshops around Luzon, the Visayas and Mindanao, the goal being the Ternocon competition in the end.

Gonzales and his colleagues were sponsored by Bench, which helped source equipment such as sewing machines. They also partnered with local government units.

“An unexpected benefit of doing the workshops by region,” said Gonzales, “was that it changed the way the participants or contestants approached the competition. The designers were helping each other! They were sewing for each other!”

Gonzales said that what helped was the example set by the mentors—Inno Sotto, Len Cabili, JC Buendia and Cary Santiago.

“I believe that the participants picked up the message that we were all working on this as a community. Everyone was really so involved—Inno, Ben Chan, the people at CCP.”

Last week, the winners and chosen designers from the Ternocon 2018, held at Cultural Center of the Philippines, exhibited their ternos at SM Mall of Asia. The exhibit ended June 19, and will tour the other regions the rest of the year.

The Ternocon at CCP last year had about 400 guests, whom Gonzales considered “the influencers and the trendsetters.”

But because they now want to raise the awareness of the terno nationwide, “the next step was to take the terno to the malls. This exhibit will be taken to the different regions. We want to decentralize. The terno is not just for Metro Manila; it’s for the rest of the Philippines.”

In an interview with Lifestyle, the Ternocon’s chief mentor, Inno Sotto, recalled his stint: “I had some absolutes. First, you have to make things wearable. You are trying to convince real women to wear the terno, not associated only with the Santacruzan or Flores de Mayo.

“Don’t make them bongga! Stop thinking about creating your obra maestra! Don’t focus on being great, don’t intend to be great! Make it wearable.”

Another thing to guard against, said Sotto, is losing the essence of the terno.

“Because designers want to make the terno wearable, they modify the design, so it isn’t a terno anymore. For example, they make the sleeves smaller. I understand that they are trying to make it less cumbersome but if you change the proportions, it’s not a terno anymore. Don’t westernize it!”

Sotto concluded that he is, first and foremost, a Filipino: “I have utmost respect for everything that has to do with who I am—Filipino. The language I speak is design. And I use design to express what is in us. I try to express and enhance our identity as Filipinos.”

Asked why the advocacy of the terno, Ben Chan replied: “Bench is a Philippine national brand. Though our brand is modern and made for the world, our soul is Filipino. We are constantly inspired by our culture. Preserving our national dress, and our heritage in general, is essential if we want to keep our soul alive.”

Chan expressed appreciation and gratitude to the contestants of the Ternocon competition.

He said, “I hope that our small effort in preserving our way of dressing either through a project like Ternocon or our incorporation of Filipino elements in some of our Bench designs make its mark in the way we dress as proud, fashionable Filipinos.”—CONTRIBUTED