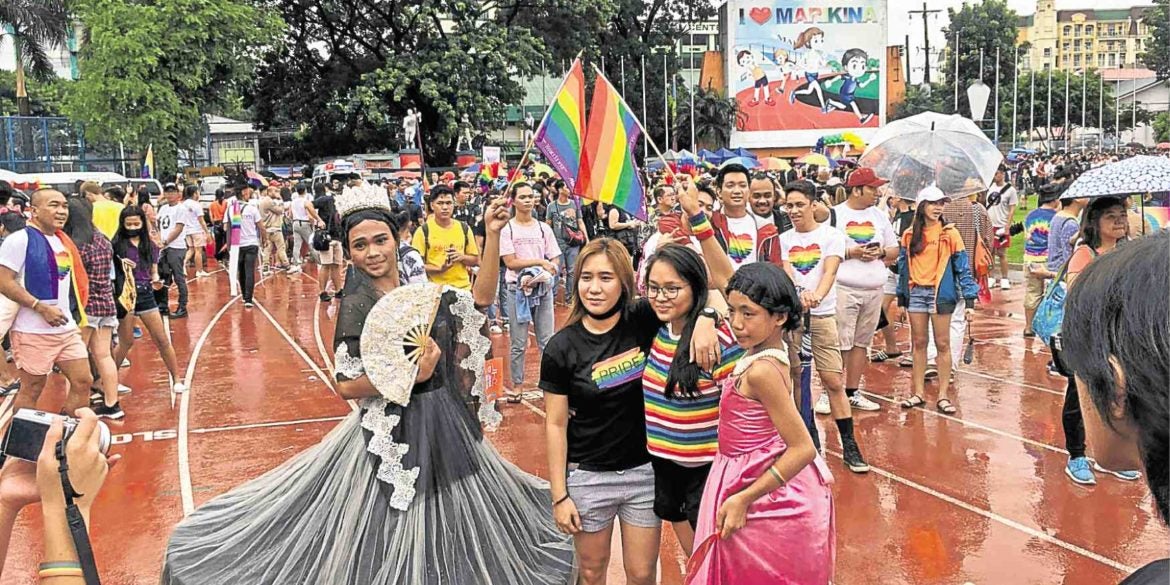 Celebrating Pride in an inclusive city

One young man asked me, with teary eyes, ‘Why are you doing this?’

It has been years since I first attended a Gay Pride event in Malate, and back then, my gang and I were there mainly to party with gay friends.

Last June 29, I found myself at the Marikina Sports Stadium, in the middle of mud and rainshowers, in what vacillated between being a mini downpour and a friendlier cloudy day in minutes.

I was there upon the invitation of a friend, Dana, the ultimate supportive mother of a gay son. Although her son was away at school, she and husband Paolo still took it upon themselves to come celebrate, and cart along a few of us in the process. Dana even had shirts printed—hers said “Free Mom Hugs,” mine said “Free Tita Hugs,” and our friend Ouie, fancying neither, settled for the more provocative “Free Maldita Hugs.”

Dana and Paolo also brought the ultimate ice breaker—their gorgeous, humongous Bernese Mountain Dog, Rusty, already a certified Dr. Dog for the Philippine Animal Welfare Society (PAWS).
Under a tent that advertised free hugs, we hung out, enjoyed the color and music—and learned anew how love would always be a welcome commodity.

I realized it was the 50th anniversary of Stonewall, the spontaneous demonstrations that happened in Greenwich Village, New York, in 1969, considered the beginning of gay resistance against discrimination and abuse.

“It was the start of a new template for gay activists,” declared the New York Times, “one that urged outspoken defiance against homophobic and transphobic forces.” A great occasion to celebrate, because in the 2019 version, NYT reported, instead of unleashing violence on protesters, New York City cops even helped string up pride flags for the occasion.

The pride event was set in Marikina, where I have lived all my life, a city that filled me with my own pride when they lit up City Hall a few days earlier with rainbow colors.

On the day itself, Marikina Mayor Marcy Teodoro officially launched the Anti-Discrimination Ordinance, City Ordinance No. 065, in effect criminalizing any act of discrimination against LGBTQ+ people.

Compare that with the online missive a few days before, from the Couples for Christ Foundation for Family and Life (CFC-FFL), criticizing the recent Ateneo Pride activity. These genders, the statement said, “have no basis in nature and reality,” and referred to homosexuality as “disordered.”
CFC-FFL also declared it was “certain” that members of the LGBTQ+ community in the Philippines were not subjected to discrimination and persecution.

In the face of what we view as a gross misinterpretation of the Catholic faith’s fundamental message of love—even the Pope is choosing compassion over doctrine, and rightly so—my friends and I put on the shirts and braved traffic and rain to make it to the event.

Many held up signs, from the personal and naughty (“Free hugs,” “Palamas naman ng d-d-”) to other interest groups (“Ve-GAY-tarianism”) and, what do you know, logos of corporate biggies like JP Morgan, AIG, Accenture and more.

The hugging part was a humbling experience. Standing there with our arms outstretched, we were approached immediately by several young people, some sheepish, some delighted, some boisterously yelling, “Happy Pride po!”

Some just walked into our arms, heads bowed, on the verge of tears, bringing us to tears, too. Dana got the lion’s share of emotional, extended hugs; I told her, we figured the kids could feel her empathy, and realized at once that her arms were a safe place.

For the more hesitant, Rusty was the perfect excuse; after snapping a selfie or two with the amiable canine, they would head straight toward us—solitary youngsters, groups, friends pushing each other to go first.
One beautiful butch girl hovered around Rusty for a time before asking meekly, “Can I have a hug?”—and falling apart in Dana’s embrace.
One young man asked me, with teary eyes, “Why are you doing this?” All I could say was, “Because some of you really need hugs.” Ouie and I outdid each other coming up with messages to whisper in the kids’ ears—“You deserve to be loved,” “Love who you want,” “Be proud of who you are,” and my own favorite, “Don’t let anybody else tell you who to be.”

I am no gay activist, and I will not presume to understand what these kids, gay people, and the parents of gay children experience. I was there simply to express support for the community, and to show people that, although a hug was all I could give, it could make people feel better; my own heart was certainly warmed.

Though I have no kids of my own, all I wanted to say was encapsulated in a sign held by a smiling mother; I was so blown away, I asked for a selfie. “Tama po kayo!” I lauded her. “Hindi ba?” she replied. “Yun lang naman, eh.”