In a place as crowded as NAIA, this woman meets the love of her life | Inquirer Lifestyle 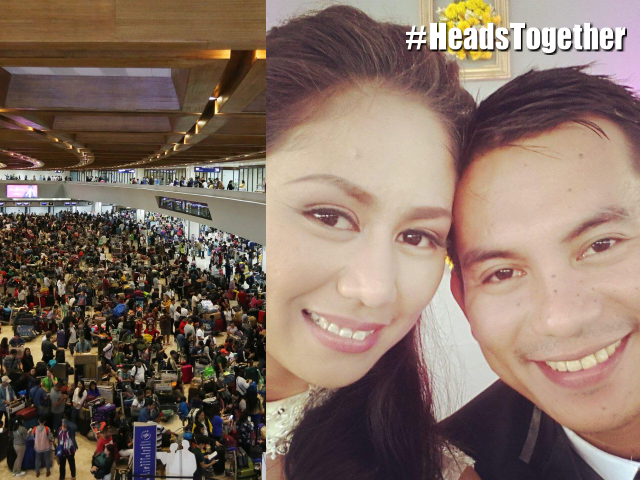 In a place as crowded as NAIA, this woman meets the love of her life

We all know how life can be a rollercoaster ride.

Some days, we feel as high as the sky; while other times, we are down in the dumps. But with every twist and turn, we’ll stumble upon various types of people who will teach us valuable lessons–no matter how short or long they stay in our lives. There are also individuals who will shape us in more ways than we know. And without you knowing it, this stranger, whom you just met in a crowded place, will eventually have a deep and wonderful connection with you.

The reality is that we have spent our entire lives searching for meaningful connections yet we are too timid to let others in. A good case in point is the story of Anna Blanca Arevalo Fragata, a 32-year-old seafarer from Dasmarinas, Cavite. In an interview with INQUIRER.net, Anna enthusiastically shared how a one-way flight changed her life forever.

First encounter with “The One”

Who would have thought that there’s beauty in a crowded world? Seven years ago, Anna was at Ninoy Aquino International Airport (NAIA) for her flight to Hong Kong. From there, she would embark to Los Angeles, California via airplane, where she would later board a boat. Upon arriving at the NAIA terminal, she noticed the name of the man, who would soon be her co-worker.

She also vividly remembered her first impression of Rodolfo, who was very aloof and not very reactive in their first conversation. During this unexpected encounter, Anna admitted that she didn’t feel anything for him–he was just a colleague, nothing more, nothing less. However, their paths crossed again when they arrived at a hotel in Los Angeles. This time, Rodolfo had the guts to sit beside her while on a bus going to the seaport.

When they finally boarded the ship, she was surprised to find out that he would be staying in the cabin opposite hers.

While everything happens for a reason, Anna believes that love happens in God’s perfect timing. Funny enough, she still continues to gush over her husband as she looks back on how their romance started. She remembered one incident, when she had to help him with his task. When Rodolfo accidentally dropped the tray, she immediately rushed to his side. As they got closer to each other, she noticed that this guy had one, tiny problem–dandruff.

Aside from seasickness, dandruff is another thing that seafarers have to endure or deal with while at sea. As many seafarers already know, the water being used in the ship often contains chemicals that may cause dandruff. And wanting to help Rodolfo, she offered him vitamins and Head & Shoulders to boost his immune system and of course, get rid of his annoying scalp issue.

“Natawa ako pero ‘yung dandruff pareho naming problema ‘yan sa barko. But, we are both supportive in facing that challenge. It was an EXTREMELY yes that Head & Shoulders ang gamit namin from then until now!”

Although her attraction to her significant other was more than just the physical, Anna and Rodolfo’s relationship started on rocky ground. Her husband was broken during the time they met; while she was in pursuit of true love and happiness.

A blessing in disguise

Despite their struggles, Anna maintains a positive attitude. For her, her faith will always be bigger than her doubts–and this belief keeps her optimistic even in the most difficult situations.

After sorting out their problems together, they decided to take their relationship to the next level. Because of all the drama and people involved in their story, it didn’t even occur to Anna that their rocky beginning would eventually lead to a happy ending.

When asked about her message to people who find themselves going around in circles, “Never seek for love, let the Lord be in control. So, what should we do? Pray for it, kahit ibulong mo lang once kay Lord ibibigay niya ‘yan. Kung may tanong ka ngayon bakit ka nasasaktan masasagot yan if you patiently wait for God to create the love masterpiece na hinahanap mo.”

There are 7 billion people in the world, and nothing happens by accident. No matter how we keep building walls just to keep people out, we will meet someone who is willing to share that personal space with us. Just like Head & Shoulders, the shampoo for the crowded world ,works not only to remove flakes but also provides an invisible, protective barrier against scalp irritation so that we can all be close and put our #HeadsTogether in facing life’s daily challenges.

For more inspiring stories about people getting their #HeadsTogether, follow the official page of INQUIRER.net. Share your #HeadsTogether moment using the hashtag.