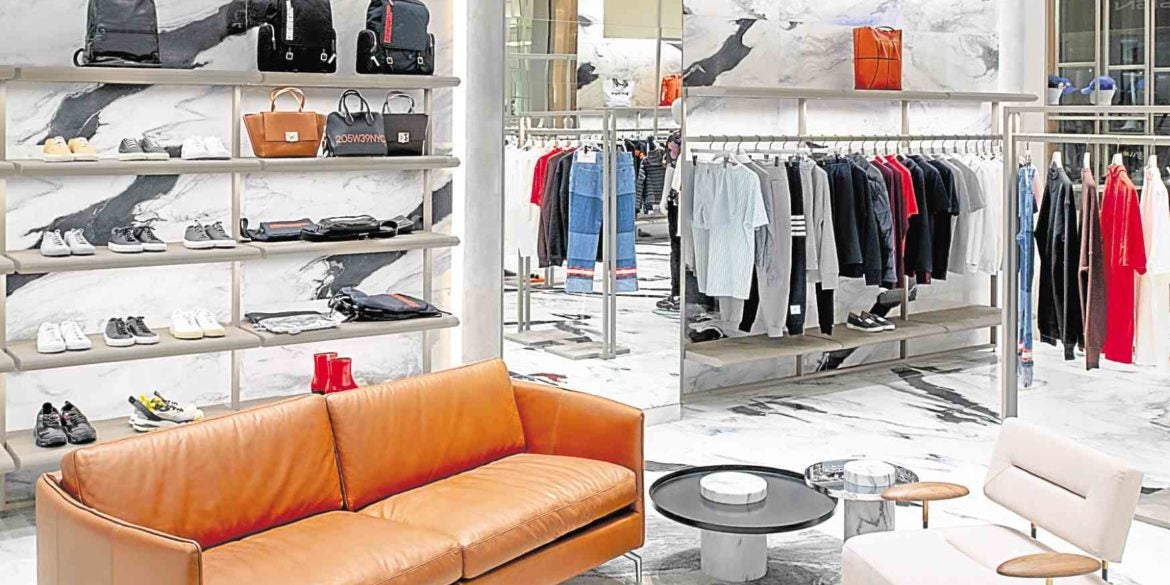 Univers at Solaire’s orange sofa pops out in a neutral color scheme. —Photos by Frank Callahan

At Univers in Solaire, the target market wouldn’t blink at the prices. This is modern luxury

Univers, the high-end fashion boutique, has opened a branch that is, quite literally, a universe all its own.

The interiors capture the lifestyle of the high roller. Architect Eduardo Calma decorated the 200-sqm space with polished surfaces, his signature angular lines and play of volumes.

Panda marble—crisp, white natural stone with soft, black stripes—makes a bold statement. The marble wraps around the floor and the walls.

Likewise, the marble pedestals, which display expensive sneakers, look as if they emerged from the floor.

“I wanted to introduce Panda marble because of the random black patterns. It makes the floor look like abstract art,” says Calma.

Taking advantage of the double-height ceiling, Calma designed a topography of uneven rectangular boxes, visually enhanced by lighting. Shiny metal shafts suspend from the ceiling to serve as hanger bars for the clothing.

“Most stores don’t have an image at the merchandise level,” says Calma. “Here, the store image is created by the design on the high ceiling.”

The focal wall is a floor-to-ceiling mirror that doubles the illusion of the store’s space.

“This is a different kind of Univers,” says Mark Gonzalez, founder and managing director of the umbrella company, H&F Retail Concepts.

The richness of interiors plays against the casual T-shirts, polo shirts, jeans and sneakers.

Y-3 has posted healthy sales. Sixty percent of its customers are transients, while 40 percent are locals who visit the mall on weekends or holidays.

At Y-3, customers look for slides since they can’t enter a restaurant in flip-flops. He observes that they walk around the Solaire complex in polos, T-shirts, jeans and sneakers, and don’t dress up for dinner.

“Nobody wears leather shoes unless you work here,” says Gonzalez.

He points out that Univers merchandise in Solaire are skewed toward male customers, who tend to shop on impulse. They need something to wear around the Solaire complex.

Nonetheless, Univers is au courant with its merchandise which is focused on athleisure and streetwear—today’s status symbols.

“This isn’t luxury as you know it. It’s modern luxury,” says Gonzalez.

The capsule collection of Kaws x Dior collection, a collaboration between the street artist Kaws and Dior designer Kim Jones, comes with a hefty price tag.

A branded T-shirt emblazoned with the Kaws’ Bee logo fetches P60,000. A pair of jeans costs P70,000. A pair of sneakers by Common Projects is tagged at P25,000. Univers’ target market wouldn’t blink at the prices.

On the elegant glass shelves are Dior x Kaws leather bags for gamers to stash their chips and cash.

Since its opening, sales have been flourishing. Unlike the local Univers consumer whose shopping behavior is usually driven by luxury, the gaming clientele shops for personal consumption. —CONTRIBUTED