For Valentine’s, the best of both worlds—‘jewelry chocolate’ | Inquirer Lifestyle ❮ ❯ 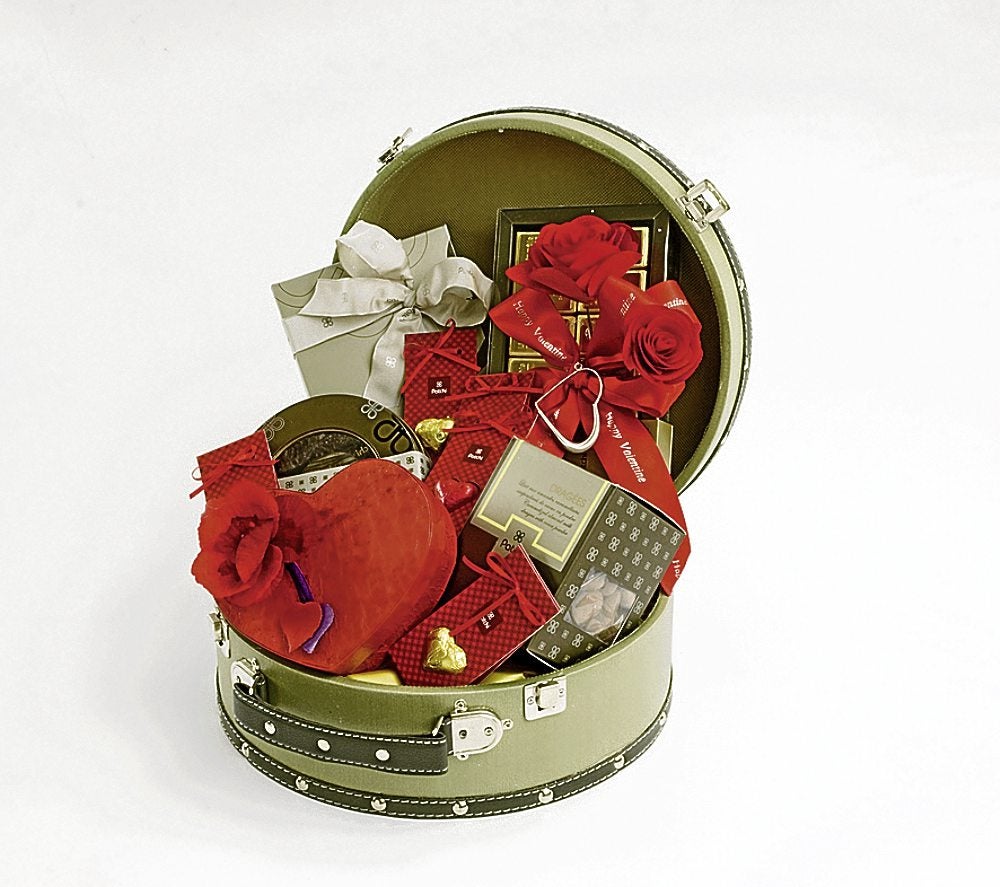 For Valentine’s, the best of both worlds—‘jewelry chocolate’

If you listen to this man, you can give jewelry to your sweetheart this Valentine’s without actually springing for one.

Choucair, managing director and son of the founder of Patchi, the Lebanese premium chocolate brand, said Patchi is described as “jewelry chocolate” owing to the meticulous process by which it is made—by hand—as well as for the details and fine materials used to decorate it for gift-giving, such as velvet ribbons and silk flowers, leather boxes, Murano vases, Swarovski crystals, silver trays.

Patchi was founded on the Lebanese tradition of gift-giving to mark a milestone—a mom who’s just given birth, a couple newly engaged or married. The chocolates also make good table centerpiece.

The arrangement is elaborate: individually wrapped and beribboned on silver platters, or nestled with trinkets in glass bowls or crystal vases. Sort of like flowers, only they’re edible.

“Lebanon celebrates many occasions, and it’s a tradition to give presents,” explained Choucair, who visited Manila for the first time last week. It was his first trip to Asia. “Chocolate is a typical gift. In the Middle East, we consume a lot of chocolates.”

It was Choucair’s father, Nizar, who started the business in 1974. A frequent traveler to Europe, the father took the chocolate idea and added his  concept: to present the sweet treats as gifts. He called his shop Patchi, a Frenchified pronunciation of the Italian word for kiss, bacio (French is a major language of instruction in Lebanon).

Though chocolate is not native to Lebanon, Choucair pointed out that his country is highly regarded for quality craftsmanship.

“We’re known for high-end jewelry production and high-end fashion, where some of our designers have gone international, like [Hollywood red-carpet favorite] Elie Saab,” he noted.

“The Lebanese travel a lot, and adapt what they see abroad to the Lebanese market. That’s what my father did with Patchi. We added our own touch: we decorated our chocolates.”

Patchi’s smooth and silky chocolate concoctions come in 55 varieties with different fillings. They come in white, milk, dark and even sugar-free varieties.

Choucair takes pride in what he called Patchi’s unique concept. “You won’t even find it in Europe. You find mostly unwrapped chocolates there. Ours are wrapped and we have a collection of accessories for every occasion.”

He said that at Harrod’s, London’s luxury department store, Patchi is the No. 1 selling chocolate brand. In 2008, Patchi and Harrod’s collaborated to create the most expensive chocolate collection. The box sold for £5,000.

Patchi sources its chocolates and ingredients in Europe, and  the machinery in their factories in five Middle Eastern countries.

He was quick to clarify, however, that Patchi isn’t expensive. “You get what you pay for,” he said. “We have our own niche market.”

Patchi is sold by weight, at P4,250/kg for Classic and P4,850/kg for Deluxe. The shops can customize the gift arrangements, at cost. They also customize orders for weddings, baptisms and other special events.

There are also prepacked chocolates in tins and boxes. As Valentine’s is a big deal here, expect a lot of Valentine-theme arrangements in its two outlets.

Brian Lim, Suyen Corp.’s vice president, admitted Filipinos have yet to get into the habit of giving chocolates as gifts on occasions other than Christmas or Valentine’s. But Choucair said he’s “extremely happy” with Patchi’s performance in the Philippines in such a short period.

Patchi is sold in 145 shops from Armenia to the US, and is expanding into new markets, including Russia and China. It’s well-known in the Middle East and is likened to luxury designer brands. Its stores in  the UAE or Saudi Arabia are vast and plush. Its Beirut flagship alone is 2,700 sq m.

Choucair laughed when asked how Patchi managed to survive through Lebanon’s political ups and downs. The brand is on its 38th year.

“We’re, unfortunately, used to political instability now,” he said wryly. “The Lebanese people, I can assure you, even in war, whatever instability, they keep going out. They keep celebrating. They know how to have fun a hundred percent.”

And, apparently, they also know how to pick out a gift when they need to.