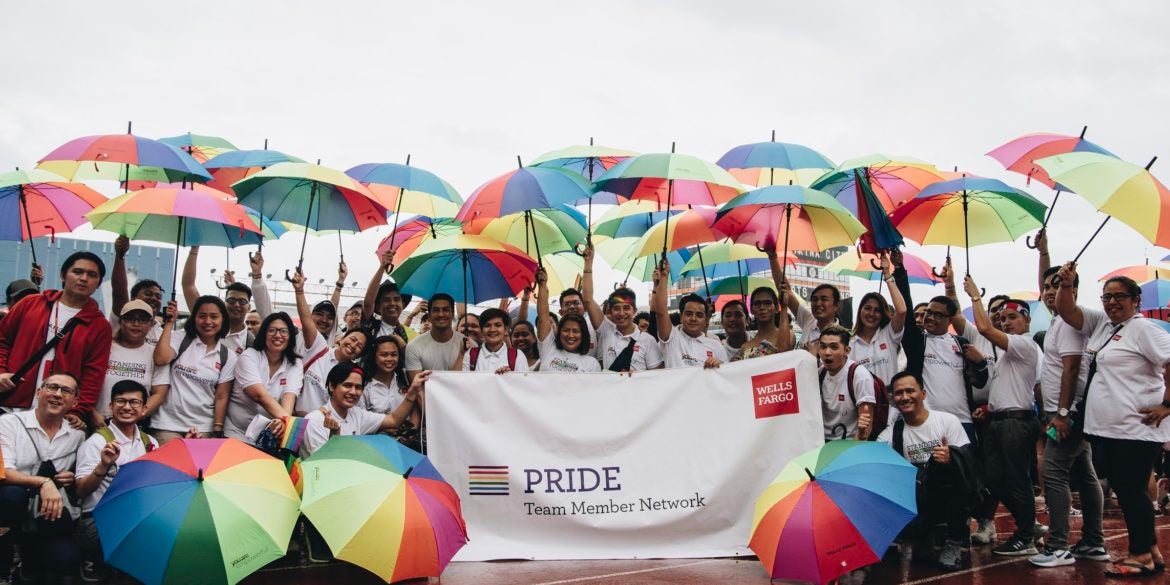 Wells Fargo Enterprise Global Services (EGS) Philippines showed its support to the LGBT (lesbian, gay bisexual and transgender) community this year by joining the 25th anniversary of the Metro Manila Pride March at the Marikina Sports Complex.  The annual walk with the theme #ResistTogether aimed to call for heightened awareness on equality among the LGBT group in the country.

Ian Gabrinao, Wells Fargo operations manager, walked loud and proud supporting the cause.  As Pride Team Member Network’s chairperson, he participates in the Pride march every year to freely express his gender identity and show respect to the LGBT advocates who fight for the community’s rights.

Pride Team Member Network (TMN) is a group that specifically caters to the members of the LGBT community and its allies while implementing noteworthy initiatives that address their interests.  “It is the voice of equality for the LGBT community in the workplace.  We are here to promote mutual respect among team members regardless of sexual orientation and diverse expressions,” said Gabrinao.

Pride TMN Philippines started in September 2015.  This group now has 271 members and is regarded as a non-virtual Pride chapter outside the US.

“We hold awareness campaigns on our main advocacies such as SOGIE (sexual orientation, gender identity and expressions) talks, HIV/AIDS education, support on anti-bullying and inclusion efforts for transgender team members,” added Gabrinao, who is certified by the Philippine Financial Industry Pride (PFIP) as a SOGIE facilitator.

Over the past 30 years, Wells Fargo has built a reputation as the financial institution truly supportive of the LGBT community.  The company’s ongoing and unwavering commitment to the LGBT community is evident through its support to various strategic partners.

Wells Fargo has offered HMO coverage for domestic partners in August 2016, a benefit which is not yet prevalent in the local market.   Pat Zaraspe, Wells Fargo team leader, is a transgender woman and a mother to a 7-year old boy. “Wells Fargo has been very generous to me ever since I joined this prestigious company. I was very grateful when HR worked on the HMO plan for domestic partners. I was one of the team members who availed this.  It was very helpful to us because my partner was previously diagnosed with a bladder tumor. Good thing it was benign,” shared Pat.

Working in a safe and conducive environment is key to team member experience.  Wells Fargo facilities cater to diverse groups of people such as the differently-abled and the LGBT community through PWD accessible fit-outs and gender-neutral restrooms.  Wells Fargo definitely considers diversity and inclusion as a priority.

Jess Porras, Wells Fargo quality manager, is a Pride core member.   As a PFIP-certified SOGIE facilitator, he continues to promote awareness on causes related to diversity and inclusion.  “I have been with the bank for 5 years and I see myself growing in this wonderful company which fosters a culture of equality and acceptance,” stated Porras.