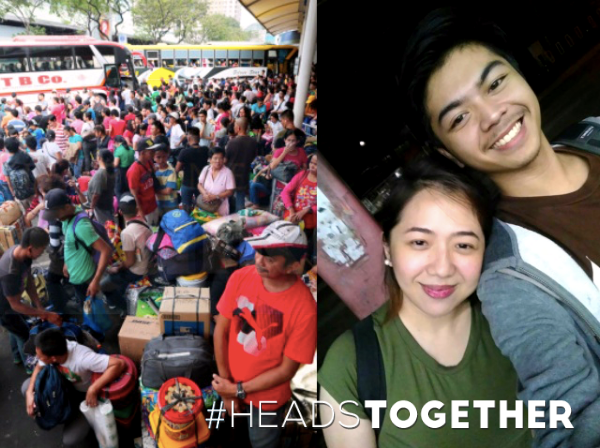 ‘Chivalry isn’t dead’: Man saves woman during a crowded commute in the metro

Filipinos are no strangers to Metro Manila’s everyday traffic. As a matter of fact, when we talk about the metro, the first thing that comes to mind is the endless agony of urban commuters–the crowded public vehicles, the 90 to 150-minute traffic, and more recently, the unpredictable weather. And just when you thought the situation couldn’t get any worse, commuters also need to be mindful of their surroundings. Apart from maintaining your balance while on the bus or MRT, you have to watch out for thieves who are really good at pretending to be normal passengers.

Because of these barriers, commuting has become another stressor in our lives. We have become too scared of sharing our personal space with strangers we encounter in crowded places. Oftentimes, we question other people’s motives to the extent that we would rather turn a blind eye than lend a hand–especially when confronted with unpleasant situations. Although we have heard a lot of horror stories about everyone’s commute experience, there are still people who are more than willing to break barriers in spite of the consequences that may follow their actions. Just like the story of Edward Janen Ortega, a 20-year-old PUP graduate, who just saved a stranger’s life from possible danger.

What was supposed to be a typical bus ride going home turned out to be the most life-changing commute experience for Ortega. Fed up about everything that has been happening around him lately, Ortega decided to stay at a mall in Taguig to destress. When the clock struck 2 AM, he finally boarded a bus bound for Guadalupe. As he found a seat in the back, the bus conductor suddenly announced that all passengers should get off at a waiting shed that is 100 meters away from Ortigas Avenue. Since Ortega was curious as to why the driver had to let them off, the bus conductor just told him that something was “off” with the driver. While everyone had already stepped off the vehicle, Ortega noticed a female passenger who was left asleep in her seat. And right after he alighted from the bus, the two immediately drove off and didn’t even bother waking her up. All of a sudden, he was struck with guilt. Leaving her in an unconscious state made Ortega realize the consequences that could possibly happen to her.

“Bakit hindi ko ginising si ate at bakit hindi siya ginising ng konduktor? Baka ma-rape or at worst, kapag lumaban, mapatay pa si ate at mabalitaan ko na lang sa balita,” he said. (Why didn’t I wake up the lady and why didn’t the conductor bother waking her up too? What if she was raped? Or worse, what if she fought back and ended up getting herself killed. Will I see her on the news?)

From a distance, he noticed that the lights inside the bus went off–and that view prompted him to chase it. When he was finally able to catch the bus, he hurriedly knocked on the door so he could get in. Wanting to save the poor lady from impending danger, he pretended that he had lost his wallet inside. As he was searching for the “missing wallet,” he asked the conductor if they would also let off the woman but the driver just replied, “Wag mo na gisingin yan, kasama namin yan” (Don’t wake her up, she’s traveling with us). Ortega knew that the two were just lying, and his eagerness to save the stranger eventually led to a commotion. Because of the noise, the stranger–whose name is Roxanne Roxas–had finally woken up and they both got off the bus safely.

Saving a stranger, gaining a friend

Even though the incident almost put both of their lives at risk, Ortega still gained something really positive from it–he found a new friend. And ten months later, Ortega and Roxas still talk via Facebook and would meet at the latter’s workplace. “It feels like knew each other for a very long time. So, si Ate Roxanne will deliver her baby sa August. We do still chat pa rin naman. We usually meet sa workplace niya sa Ayala. We had a dinner together with my family,” he gladly shared.

For Ortega, the bus incident was not just a warning for every urban commuter, but it was also a reminder to himself––that even the smallest act of kindness could have an immense impact on other people’s lives. In an interview with INQUIRER.net, Ortega believes that there is good even in the most crowded and dangerous places–a sentiment that resonates in Head and Shoulders‘ newest campaign. In keeping your heads together with other people, Ortega’s message is to always practice kindness. “Be kind to other people. We have our own struggles so always be understanding. Medyo hindi ko vina-value ‘yung life pero I realized na sobrang halaga pala talaga ng buhay. Kaya if ever, please, kahit malaman mo lang na malungkot at may depresyon o may suicidal tendencies ang isang tao, make some move na.”

Sometimes, we get stuck in this circle of thoughts believing that we can’t do anything especially in the darkest of times. But when we start removing the barriers that stop us from making that connection with people in a crowded world, we will be able to realize our true potential.

For more inspiring stories about people getting their heads together, follow the official page of INQUIRER.net. Share your #HeadsTogether moment using the hashtag.