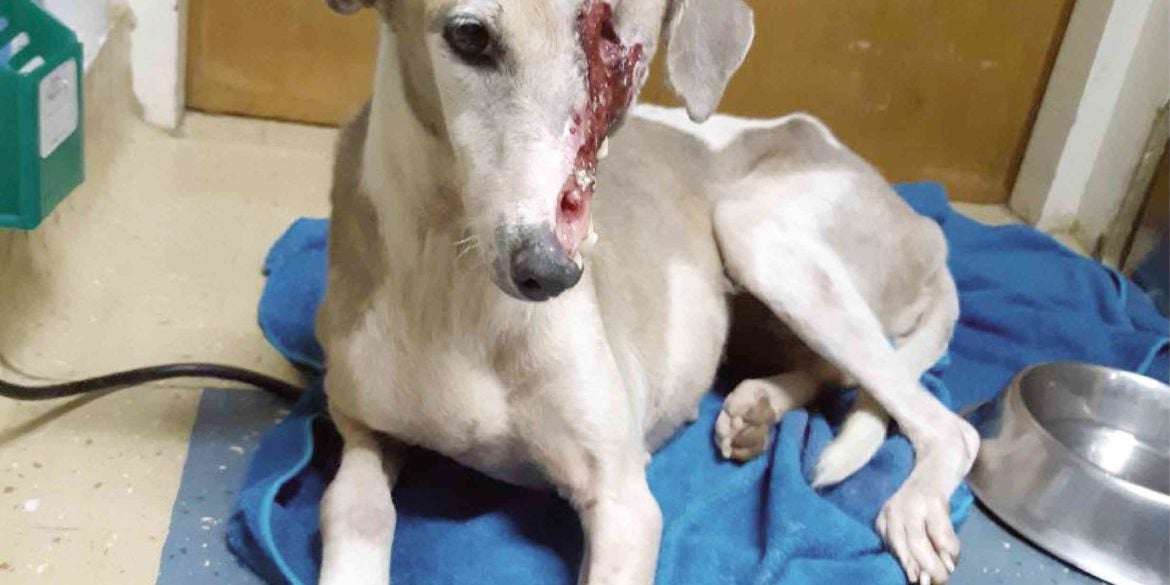 For weeks, netizens were aghast at the sight on social media: yet another badly disfigured dog, the left side of her face practically melted away, lying in the sand in Boracay—ugly proof that monsters did live in paradise.

But as this incident proved anew, animal rescuers will somehow find ways. Anna Cabrera, executive director of the Philippine Animal Welfare Society (PAWS), and Mich Van Der Kleij, founder of the Aklan Animal Rescue and Rehabilitation Center (AARRC), joined forces, as it were, to save Dolores, as they called the asPin.

“Mich asked for help, as there was no vet clinic on the island that could handle the case,” says Cabrera. “But AARRC must be commended for doing everything they could, even going by sea and pedicab, and starting initial treatment to save her.”

Last Monday, an AARRC volunteer accompanied Dolores as she arrived at the pier in Batangas and was taken to the PAWS Animal Rescue Center (PARC) in Quezon City. Cabrera also found an ally in Vets in Practice (VIP) Animal Hospital senior veterinarian Dr. Marga Carpio, who met Dolores at PARC and, seeing her situation, decided to confine the dog at VIP, with all medical treatment provided pro bono.

Videos of the dog’s arrival showed her gently submitting to the examination. “Amazing how she still trusts people, after this,” said Carpio, who theorized that Dolores was splashed with boiling oil, probably in an attempt to shoo her away. The left eyeball is completely gone, as are parts of the lower lip and snout; in a video of her first treatment, Carpio is seen cleaning and debriding the pus-filled open area after Dolores was anesthetized.

The veterinarian is optimistic the tissue will heal because it was actually alive and bleeding; skin may be grafted later to cover the wound. Dolores’ teeth were also examined.

The dog, estimated to be 9-years-old, has other problems, though: heartworm, a parasite infection which must be treated progressively over the next six months so as not to strain her heart, and ehrlichia, a pest-borne disease similar to dengue in humans, which requires a round of antibiotics.

Nevertheless, Carpio says the prognosis is good: “She is strong, and she hasn’t given up on life.”

Although the rescuers and the vet are not yet looking beyond Dolores’ healing, it is unlikely she will be sent back to Boracay, and will probably be rehomed in Manila. Already, some blessed souls from that special breed of adopters who open their homes to traumatized dogs or animals with disabilities are expressing interest.

The other piece of good news is that PAWS is also ready to work with AARRC to prosecute whoever committed this gruesome act. “If we are able to determine who did it, we are very willing to help AARRC file a case,” says Cabrera. “It’s no longer just about bad treatment, but a crime of animal abuse. There is an Animal Welfare Act, and people who witness such cases don’t even have to go to us; they can report the incident directly to the police. About 80-90 percent of the cases we file are prosecuted.”

So Dolores may still get justice, and other lowlifes who think it’s okay to do this should think twice. For this most innocent of victims, whom Carpio says must have suffered “indescribable pain,” life can only get better—thanks to humans who cared enough.

Speaking of lowlifes, Carpio also cited a recent case of a dog shot in the face by a policeman (!) in Los Baños, Laguna—but that’s another horror story.
—Alya B. Honasan