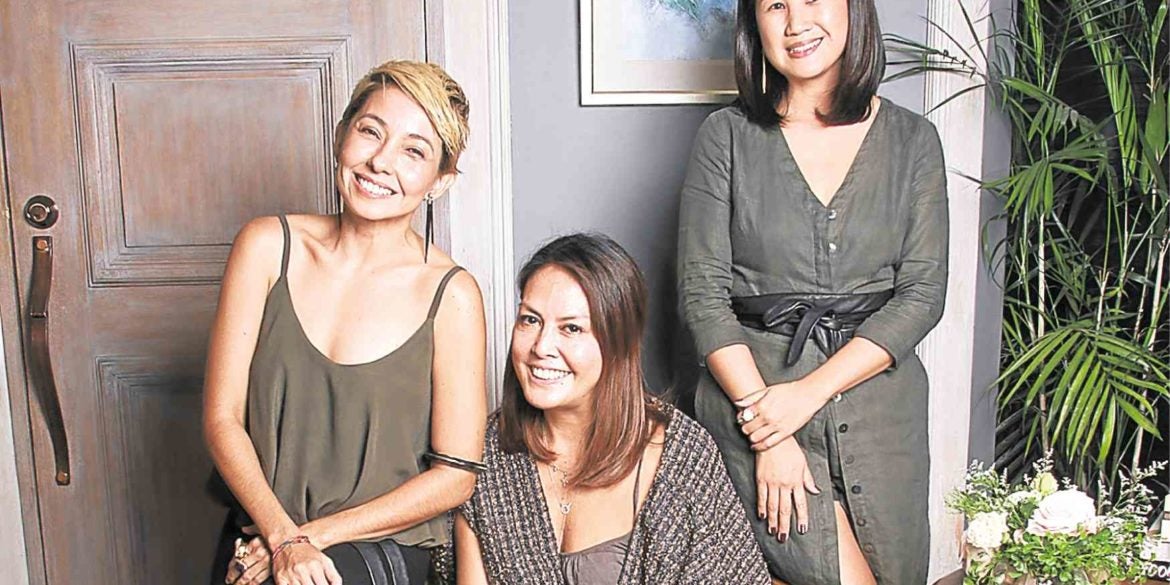 Next up, a benefit for Best Buddies, a nonprofit that helps persons with developmental disabilities

The story of a farm ecosystem was told in a five-course dinner.

Trish Panlilio, owner of Mulberry Door restaurant, teamed up with Hindy Weber and Melanie Go of Holy Carabao organic farm for a cause.

Although “farm-to-table cuisine” sounds like a cliché for locally produced ingredients, Weber explained that it’s the direct supply and collaboration between the restaurant and the farm that the dinner special. Hence, the theme “Harvest,” which pays homage to Holy Carabao’s produce and  foraged food.

The palate was teased with a cream of zucchini soup, garnished with fresh moringa flowers. White corn kernels were roasted with onions for added crunch.

Then came the refreshing salad greens, pansit-pansitan (shiny bush), moringa flowers and pickled sugar beets, subtly flavored with a mulberry vinaigrette dressing. The mulberry from Holy Carabao was cooked into a jam, then added with lime and balsamic vinegar for tartness.

These appetizers were paired with a floral Prosecco.

The lemon crabmeat, a bridge between the main course, was stuffed into an aubergine roll on top of tomatoes and drizzled with romesco sauce. The fruity rosé paired well with the lightly cooked dish.

The magnum opus was the cochinillo, Holy Carabao’s black pig, roasted for three hours. While Mulberry Door is famous for its paella, the restaurant came up with a Filipino version using Holy Carabao’s pakbet ingredients. Instead of the conventional salsa verde for cochinillo, the eggplant  chimichurri cut through the smokiness of the pig. The eggplant was roasted and flavored with cilantro, olive oil and lemon for the sauce.

The Calera Chardonnay’s clean finish was a foil to the richness of the main course.

Produced from scratch, the ice cream was churned with fresh carabao milk from the farm. It was decorated with honey tuile,  a crisp, lacelike cookie made with triple sec, lemon juice and honey; and a hint of a lemon sponge cake with aratilis (Kerson fruit) compote.

The foods were plated in Panlilio’s signature style of mixing patterns—flowers, foliage and butterflies. The butterfly symbolizes her late mother, jeweler Fe Panlilio.

Holy Carabao’s farm in Laguna is less than an hectare and cultivates some 30 varieties of plants. “We feel it’s the way to grow organic food. If you go for higher yield,  you compromise. Our strategy is to partner with smaller organic farms than centralize the business around us,” said Weber.

Proceeds of the “Harvest” dinner will go to Holy Carabao’s beneficiary, Soil (Samahan ng Organikong Industrya ng Laguna), a cooperative with over 40 members.

“There are a few farms that are well-established in Laguna,” said Weber. “The rest are owned by poor farmers who live in remote areas. They have no access to farm equipment. They have inherited land, want to make the most of it, but they don’t know how. Even if they grow food organically, where will they sell?”

She added: “Educating them is our priority. We plan to train them in business, marketing and logistics. These farmers know how to cultivate food, but they undervalue their crops. They end up selling to the lowest bidder. Their lands are fertile but not maximized. Their children would rather find work in the city. We have to protect these farms. These are the ones that will sustain our country  and our planet.” —CONTRIBUTED