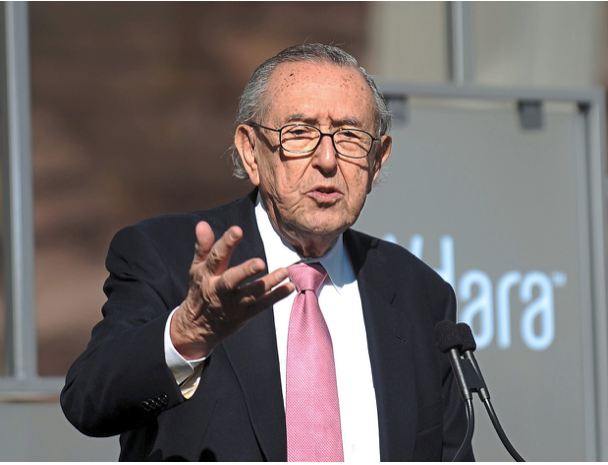 The man behind Malaysia’s twin symbols

JUST about every Malaysian knows of the Petronas Twin Towers, the buildings that have become the icons of Kuala Lumpur and the nation for the last 20 years. But I wager few can name the architect – Cesar Pelli – who designed them.

His name came up last week when news broke of his death at age 92 at his home in New Haven, Connecticut, United States, on July 19.

Google his name and there are scores of admiring obituaries, many associating him with the Petronas Towers that held the title of the world’s tallest buildings from 1998 till 2004, when it was surpassed by Taipei 101.

Despite that close association with our most recognizable landmarks, none among Malaysian media, apart from running a news story on his passing, gave him a proper obituary. I am not sure why but I feel he deserves a little more respect than a one-day mention.

So I am here to try to make up for it. I feel I have a bit of locus standi to write, not an obit, but a tribute of sorts to Pelli because I think I am the only Malaysian journalist who had an exclusive interview with him.

So today’s column is dedicated to Pelli and I will recount parts of the profile I wrote on him that was published on Sept 6, 1999, in Section 2, as the features pullout of The Star was called, and I was its editor.

The Petronas Towers had been completed the year before and to mark its official opening on Aug 31, 1999, I had assigned a reporter to do a feature on the buildings.

The reporter did a good job with her stories but she was, however, unable to contact Pelli for quotes. Then we got word he was in town for the grand launch. I was really excited and I asked the reporter to try to secure an interview with him even though all her stories had already been published. But she refused as she felt there wasn’t anything left to write about him or the towers.

Taken aback by her reaction, I decided I would give a shot at getting a meeting with him.

I found out Pelli was staying at the Mandarin Oriental, so I rang to leave a message asking him, without much hope, to return my call.

Much to my surprise he called back. He was free to meet me that day itself in the afternoon.

I sped down to the hotel and met Pelli in the lobby lounge. We sat down for coffee – he had an espresso with lots of sugar! – and chatted for about an hour.

I went home and was so inspired by our meeting that I wrote my feature of 2,500 words or so on him that night.

The strange thing about it is that I didn’t make any notes or jotted down a single word he said.

To this day, I can’t explain why as it had never happened to me before. But somehow I could remember vividly and in detail what he said.

This was the only story in my career that I wrote entirely from memory. That was how big an impression Pelli made on me.

But after two decades, my memory of that meeting has dimmed considerably and I had to dig up the article I wrote to recall what transpired.

Pelli was born in Argentina and became a US citizen in 1964. When I met him, he was 73 and was quite a major name in his field.

He had served as dean of the Yale School of Architecture in New Haven, from 1977 to 1984. He was named as one of the 10 most influential living American Architects by the American Institute of Architects in 1991.

Yet, he had no airs and graces about him. This was how I described him: “Tall and lean, Pelli’s energetic personality belies his age. For such a celebrated and successful man, Pelli is heartwarmingly modest and unassuming with a wonderful sense of humour.”

During our chat, he recalled that: “In the brief (from Petronas), we were told that they wanted one tall building and one shorter and the design should be Malaysian.”

But Pelli had something else in mind, his concept was for two towers of equal height joined by a skybridge.

He knew he had come up with a winner and he was so confident he decided not to take up another confirmed project in Jakarta even though the client had sent a cheque.

“I told my people to send the cheque back because I didn’t want us to be distracted by any other project in the region. I wanted this to be our first and only one in South-East Asia,” I quoted him as saying in my article.

In what was possibly his last interview a year ago, Pelli told Branford Community TV in Connecticut that he wanted the two towers to be identical in height to give a stronger image. “Joined by a bridge, they are a portal to the sky,” he said.

During my conversation with him, he shared interesting nuggets like getting a lesson on feng shui from Li Ka-shing before designing the Hong Kong tycoon’s corporate headquarters, the Cheung Kong Centre; his love for Cuban coffee; and his desire to see fireflies.

He also told me that he didn’t plan the Petronas Towers to be the tallest but it was the consultant engineer, J. Thornton, who was also on the board of the Council of Tall Buildings and Urban Habitats of Pennsylvannia, who realised that the buildings were only slightly shorter than Chicago’s Sears Tower and suggested to Pelli that they could top the then world’s tallest.

And that was how the towers took the title and caught international attention and made architectural history. They may not be the tallest buildings any more but they remain the world’s tallest twin buildings.

The mega project’s hefty cost of RM1.8bil had its share of criticism and controversy but to Pelli, the results were worth it and he was right. Twenty years later, Malaysians are as proud of them as the French are of their Eiffel Tower.

Pelli designed many other landmark skyscrapers around the world but the Petronas Twin Towers were his most famous creations, which he acknowledged in the Branford interview.

“The best known buildings we (his architecture firm) have are the Petronas Twin Towers. (They are) very, very well-known buildings. For eight (sic) years, they were the world’s tallest buildings and it was amazing for everybody that they were in Malaysia!” he said.

He was clearly delighted that the towers have become a symbol of Malaysia and that was only possible because they have “a mystical quality” about them.

As I watched that TV interview, I marvelled at how Pelli at 91 still exuded the same enthusiasm and passion he had for his work as he did 20 years ago.

I had the privilege to meet many famous and amazing people in my long career as a journalist and Pelli is among my top five favourites. /jpv