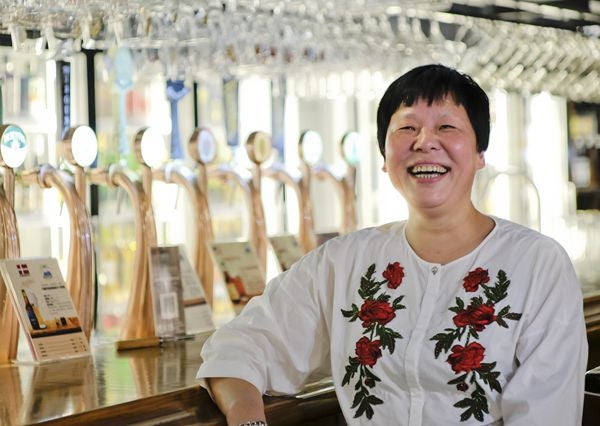 SHANGHAI — Zhang Yindi, better known as “pi jiu ayi” or “beer auntie”, is all the evidence that one needs to prove that the craft beer scene in Shanghai is booming.

Since setting up a small craft beer supermarket called Beer Lady in 2011, Zhang has gone on to open another four outlets across the city. The second, third and fifth outlets aren’t different from the first-they are essentially no-frills supermarkets that, apart from craft beer, sell a smattering of light bites like sausages, pizzas and potato chips.

Her fourth store, however, would leave most of her ardent fans floored, because this iteration clearly shows that Beer Lady is no longer just a supermarket.

Opening in November last year, this sprawling 3,000-square-meter outlet can accommodate about 1,200 patrons and comes with a performance stage, beer fermentation tanks, rows of tanks containing live seafood, a professional kitchen and a private room filed with beer-related paraphernalia that aims to showcase beer culture to important guests.

The entire project might appear to some as overly ambitious. Given the store’s location in Baoshan, a suburb in northern Shanghai that is an hour away from the city center by subway, it seems unrealistic to rent such a massive space. Some patrons have commented that the crowds here have been thin, even on weekends.

But those who think that Zhang is drunk on her own success and has overestimated the draw of her brand might be better off reserving judgement for now, because the 57-year-old appears to have a solid game plan in mind.

This fourth outlet, she says, is not just a food and beverage establishment-plans are already underway to work with partners so that this location will be a stop in the tour itineraries of travel agencies and the preferred location for company events.

“When I first started selling craft beer, I didn’t have ambitions to expand it on such a scale. I just followed my gut instinct,” she quips.

Although Zhang has liked drinking alcoholic beverages since she was young, her love affair with craft beer only started around 2008 when she had her first sip of it. About two years later, when her grocery store business was affected by the rise of e-commerce, Zhang started toying with the idea of selling this beverage to boost sales. Serendipitously, a Belgian craft beer distributor approached Zhang and asked if she was interested in carrying his products.

“I told him to send me a crate of every type of beer he had. You should’ve seen how shocked he was,” she says.

“When he asked what I would do if I didn’t manage to finish selling these beers, I told him that I’d just drink all the leftovers. It was that simple. I didn’t really give it much thought!” she laughs.

Zhang’s stock of Belgian beers sold out within a day, bought up by hordes of thirsty foreign students from nearby universities. That was when she knew she had struck gold. Within months, Zhang revamped her grocery store into a supermarket that primarily sold craft beers.

While some companies seek out social media influencers or advertising agencies to promote their products, Zhang simply relied on a photocopy machine that foreigners often used to make copies of their documents that were needed for their registration at the nearby police station.

“I’ve never done any sort of advertising before. At the beginning, Beer Lady only became popular through word of mouth. Foreigners who used the copy machine were stunned to see a supermarket with so much beer. They’d then tell their friends about it,” she says.

The turning point in the business came in 2015 when local lifestyle portal Smart Shanghai paid a visit to Beer Lady. Zhang said that business skyrocketed after the article was published.

Before long, Zhang was transformed from a humble grocery shop owner into a prolific businesswoman. She has also become somewhat of an ambassador, having met with the officials from the British and Belgium consulates through beer-related events. These days, Zhang is so famous that she hardly needs to seek out beer exporters or distributors-they come looking for her. Property developers have also approached her on many occasions to inquire if she would consider setting up shop on their premises.

Zhang isn’t quite done with expanding her beer empire, though. She reveals to China Daily that there will be a sixth Beer Lady opening in September.

Located in Songjiang district, the sixth outlet will occupy 4,000 square meters of space that will include a guesthouse, a beer museum and a special section dedicated to champagnes and wines from around the world. The establishment will also have a 300-sqm kitchen that will serve a variety of Chinese and Western dishes, including barbequed meats. She’s also throwing Russian ice cream into the mix.

“This new Beer Lady will be all about educating visitors about beer culture and offering an integrated approach that includes food and beverage and tourism,” she says.

“I’m confident that this market will become even bigger in the next five to eight years.”

When asked about her drive behind such massive projects, Zhang flashes a sheepish smile.

“I’ve always loved drinking alcohol. This is why I’ve managed to turn this into such a successful business. If you want to do something big, you definitely need to know your product and love it,” she says.

“Honestly, sometimes I feel that the beer is talking to me, telling me how to go about running this business,” she adds.

“I guess you can say that craft beer is like my lover, my soul.”