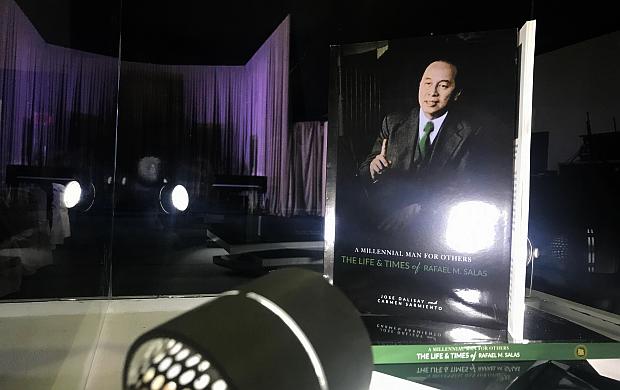 A copy of the biography of the late Rafael Salas was on display during its launch at the Bulwagang Apolinario Mabini at the Department of Foreign Affairs (DFA) in Pasay City on Friday (August 9, 2019). (Photo by CHRISTIA MARIE RAMOS / INQUIRER.net)

MANILA, Philippines — “I decided that it was time that people of this generation…should know about what a noble and remarkable man he was.”

These were the words said by biography author Menchu Sarmiento when the Commission on Population and Development (POPCOM) and the United Nations Population Fund (UNFPA) launched the biography of the late Rafael Salas on Friday in Pasay City.

The book, titled “A Millennial Man For Others: The Life & Times of Rafael M. Salas,” which Sarmiento co-authored with Jose Dalisay, narrated the life of the man who was dubbed as “Mr. Population” for his work as an advocate of population and development, as well as sexual and reproductive health and rights in the country and the rest of the world.

Salas, who died in 1987, oversaw the birth of UNFPA and was its first-ever executive director in 1969.

According to POPCOM, Salas “nurtured” the organization “with care” and “imbued it with his foresight and vision.”

“Under his leadership, the agency grew from a relatively small body to the world’s largest provider of multilateral development assistance on population dynamics through the prism of sexual and reproductive health and rights and gender equality,” POPCOM said in a statement.

During his time as UNFPA excecutive director, Salas also held the position of UN under-secretary general, which according to POPCOM, is the “highest UN office accorded to a Filipino up to today.”

The book launch marked the 91st birth anniversary of Salas and also served as a venue to commemorate his life and legacy.

“Mr. Salas was very active and very concerned about population and development, he did not think of population only in terms of family planning,” Dr. Mercedes Concepion, a former executive director of the board of commissioners at POPCOM and a close friend of Salas, said during the launch.

“There had to be balance between the numbers of people and the development program, so that was what he was emphasizing in all his speeches and he instructed the UNFPA staff to emphasize in all their programs,” she added.

“Rafael Salas used the power of data in combination with well-reasoned arguments to demonstrate to world leaders that population dynamics have profound impact on all development sectors, especially efforts to reduce poverty, to strengthen health and well-being for all, and to expand womens’ rights,” her message read.

“For his exemplary service to the international community, and for his compassion and humanity that embraced the aspirations of people everywhere, the pioneering work of Rafael Salas surely will inspire generations to come,” she added.