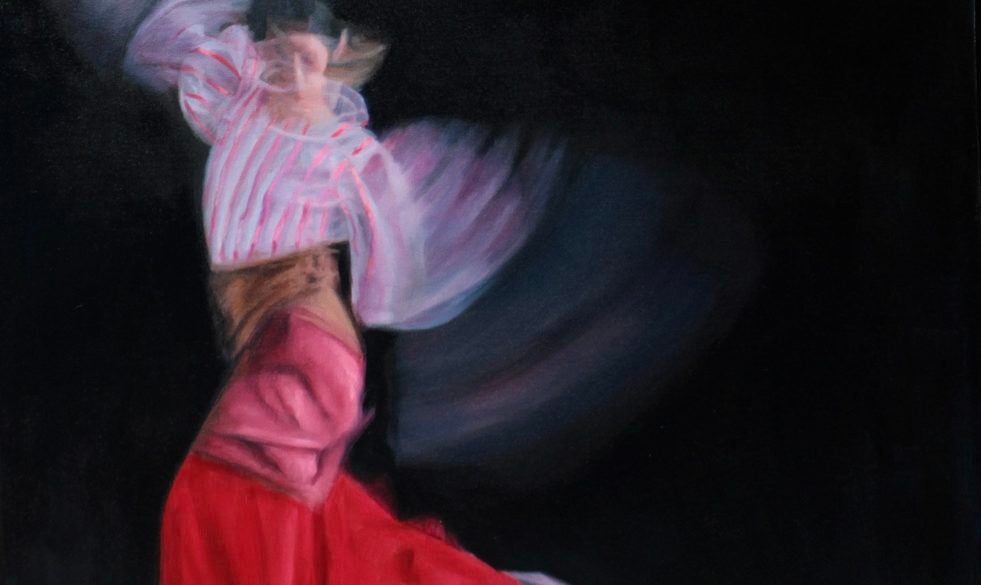 The endless fascination of the dance is painter Sandra Fabie-Gfeller’s subject in “Shifting Silhouettes,” her ongoing exhibit at Boston Gallery.

A photographer might attempt to capture the human body in motion with a series of rapid-fire exposures, or with one long exposure, leaving the camera shutter open long enough to trace the dancer’s movement on film. Fabie-Gfeller does it with pigment on canvas.

“Fabie-Gfeller captures her subject in mid-motion, the blur of her red skirt suddenly becoming some kind of a conflagration, her silhouette giving way to the much larger space, her skin blending with the air,” writes Carlomar Arcangel Daoana in the gallery notes to “Shifting Silhouettes.”

“In these particular moments, it is not only the dance and the dancer that unite but also the figure and the ground, the body and her appointed universe … What the artist captures in those mid-air turns, in the fluid motion of the limbs creating the ghostly imprint of a butterfly, is time. In these works, time has irrevocably and visibly moved from whereto to wherefrom, with the body having traversed a point to reach another, which the viewers can follow through and along the nebulous axes of her movements.”

Shifting our perception of time and space through the painted image has been at the core of Fabie-Gfeller’s work for almost as long as she has been exhibiting, in her studies of a swimmer’s body through water in “Waterborne” (2012), for instance. It has undergone a slow but continuous evolution in subsequent solo exhibits “Stilled” and “In Transit” (both in 2017).

Lifestyle explored the origins of this obsession in a talk last week with the artist:

Could you tell us something about your artistic journey? What was the road that brought you to painting as your means of expression?

Fabie-Gfeller: My parents took us to museums whenever possible, as my father paints and loves the arts in general. My dad used to paint in oils, and he had an easel set up in our living room, but in the mid ’70s it was difficult to get your hands on art materials, it was toxic and off limits to us kids. I remember watching ballets and concerts at CCP (Cultural Center of the Philippines) as a child.

My interest in painting came about when I was around 12. I remember looking at a portrait up close and thought how amazing it was that it was really just a mixture of colors on a flat surface, and stepping back and seeing it come alive.

When I was about 15, and bored during a brownout, I found myself staring at a record album that belonged to my brother. [The cover] was a black-and-white photo of Sheena Easton. It was what made me realize how everything was about light, shadow and edges. I picked up a pencil and copied it and was hooked.

I ended up with a degree in finance and got a job, but I joined some art workshops and did my art every chance I had.

I met Onib Olmedo in the early ’90s and joined some of his drawing sessions. In 1998 I met Dr. Joven Cuanang and I was included in a group exhibit at the Boston Gallery.

My first one-woman show at the Pinto Art Museum came a few years later in 2003.

What can painting achieve that photography can’t?

My late brother was a photographer/cinematographer, who gave me a 20-minute lecture on the basics. But I do base my paintings on photographs.

For this “terno” series I bought fabric in Kamuning and had the terno sewn. The top was made of white gauzy material because I wanted to see the model’s arms beneath the sleeves, and the stripes are actually satin ribbons sewn on, since I wanted the stripes to be shiny.

The skirt was stretch so my model could move freely. The model for the series is Katherine Sanchez Trofeo, a principal dancer with Ballet Philippines who has retired and now resides abroad.

She was the model for most of my works.

You return to the theme of the dance, or is it movement itself that interests you? What explains your fascination with this art form?

This series is of movement, but without the form of classical ballet. I asked my model to don the terno, then dance barefoot so as to have a more organic feel, to move freely as she pleased.

I think it was fitting that she did confident, quick yet graceful movements. As in life, you really move according to what is in your immediate environment, I suppose.

Save for one piece that shows a starting point, I like that the rest of the pieces show movements that were so quick to a point where a moving face, limb or an appendage is just barely recognizable.

I like that your imagination is engaged. I like disappearing edges, where you don’t know where the foreground ends and background begins.

I am fascinated with the discipline and dedication of ballet dancers and have so much respect for them. I was able to sit in and watch some rehearsals at CCP sometime ago.

The hours, muscle ache, bound feet, broken toes—they are not for the fainthearted! I came across a series of photos online dedicated to dancers’ feet. Once you see what is underneath those pretty pink satin shoes, you will have nothing but total respect for ballet.

Some of the paintings in the exhibit seem to approximate the photographic technique of using a slow-shutter speed to break down a movement into its component parts, or as the essay puts it, tracing it from beginning to end. What was your intent in developing this technique?

The blur is a series of in-between movements. It shows how the only thing that is constant is change, we are constantly in between the wherefrom and whereto.

Even when we are at rest, we are just pausing for the next movement. 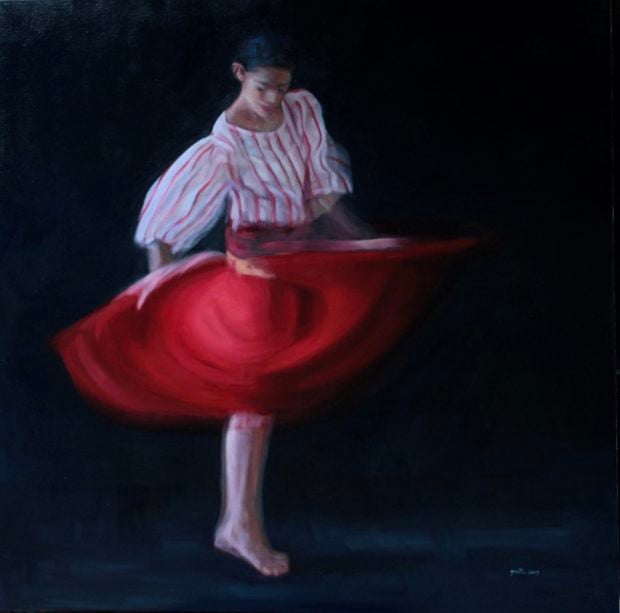