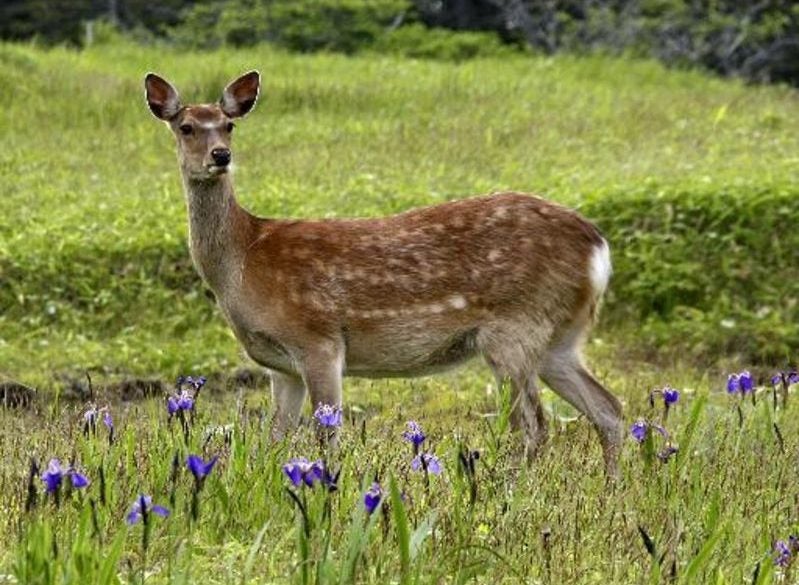 NEMURO, Hokkaido — Located on the easternmost tip of Hokkaido, Nemuro is a testament to how overseas culture spread down from the north through sea routes in bygone days.

Under a slightly overcast sky, I took a train from Kushiro Station on the JR Nemuro Line — also called the Hanasaki Line, which literally means flower blooming — heading east for my destination. I managed to get a right-hand seat by the window, which commands a view of the Pacific Ocean. The other seats filled up well before the train departed.

The train ran through forests and meadows, and along Akkeshi Bay, where there were rafts for oyster farming, and onto the Bekanbeushi marshland, where water birds were resting. The train ran onto the Nemuro Peninsula and approached Ochiishi, when I saw a grassy tableland open out toward the sea. The landscape was breathtaking.

The train ran along a curved coastline, and arrived at the last stop on the line, Nemuro Station. I wasn’t ready for the chilly air there, but I had no time to rest. I rented a car and drove still further east.

I arrived at Cape Nosappu, located at the tip of the easternmost area of the main part of Japan, where I climbed Aurora Tower to see the Habomai group of islets a short distance away. The tower also afforded me a faint view of Mt. Rausu and Mt. Chacha on Kunashiri Island.

Located nearest to the cape is Kaigarajima island, only 3.7 kilometers away. I felt strongly how close the northern territories are to the main part of the country geographically, although they’re hard to access.

I had good reason to travel quickly. The area was soon enveloped in fog.

The sea served as a path for outside culture to find its way into the region. There are ruins in the city of Nemuro showing that culture originating in Okhotsk spread across a wide area from Sakhalin and northern Hokkaido to the Chishima Islands, mainly during the sixth to ninth centuries. It was a culture of seafaring people who supported themselves by catching fish and other marine animals.

The History and Nature Museum in Nemuro displays relics from those days, which have been collected by a local researcher, 100-year-old Yasuo Kitakamae. Exhibits include earthenware and utensils, as well as elaborate carvings of sea otters and seals on whale bones and teeth. Also included is a lovely figure of a woman who appears to be wearing a dress, nicknamed “northern Venus.”

“There is an indication that the spiritual culture, such as animal-worshiping rituals, is connected with the culture of the Ainu,” curator Shigeto Inokuma said.

The museum also displays artifacts related to Adam Laxman, the first Russian envoy to Japan. He arrived at Nemuro in the late 18th century, accompanying Daikokuya Kodayu, who returned to Japan after living in Russia for several years.

“Laxman is said to have introduced black tea and skating to Japan,” Inokuma said. The easternmost point of Hokkaido was also a gateway to foreign culture.

I stayed overnight at Kajika no Yado, a tourist inn that boasts a sweeping view of Cape Ochiishi. I enjoyed local seafood specialties for supper, such as boiled crab and shrimp.

Kajika no Yado is owned by Sadami Ogishima, who originally hails from the Kyushu region. He visited Hokkaido on a trip about 30 years ago and decided to settle here.

“Fishermen in this area are rough-spoken, but they accept outsiders,” Ogishima said.

Early the next morning, I looked out the window to find Cape Ochiishi looking like a dreamscape. Tempted to walk around, I passed through a now defunct radio station building that looked like a fortress, and walked through woods. At a wetland in an akaezomatsu spruce forest, white watasuge cotton grass and purple hiougi-ayame irises were swaying in the wind. I also came across a Yezo shika doe and fawn.

A lighthouse stands painted in red and white, and there is a reddish-brown cliff with waves breaking far below it. The foggy, fantastical scenery in the area reminded me of a precipice in Ireland. Although nearly cut off by the sea, the Nemuro Peninsula is linked to other parts of the world.

Nemuro is also a paradise for wild birds.

Shunkunitai, a large sandbank, and brackish Lake Furen are both seasonal homes to a number of migratory birds. Both these wetlands are registered under the Ramsar Convention. The best way to enjoy watching seabirds is to join a tour of areas around the Yururi and Moyururi islands, using a fisherman’s boat that starts from Ochiishi Port.

I couldn’t see any tufted puffins during my tour, but I was happy to come across birds called ancient murrelets, as well as sea otters. Nemuro’s cool climate provides a boon for alpine plants and other living things.

Nemuro’s emblematic local dish is escaroppu, abbreviated as esuka in Japanese — pork cutlets with rice fried in butter, and with a demiglace sauce on the meat.

Nemuro has long been home to many stylish restaurants serving Western dishes, as it thrived on its salmon and sea trout fishery as well as canned crab production. In 1963, a chef at the Mont Blanc coffee shop, who had returned from Yokohama, started offering esuka. Esuka derives from a French word meaning a thin slice of meat.

Sadly, that coffee shop closed in 1965. During my stay, I had esuka at Dorian, a successor restaurant to Mont Blanc. Its coating had a crunchy texture like that of a deep-fried breaded pork cutlet. The esuka cutlet also goes well with a simple demiglace sauce. Contrary to its appearance, the esuka cutlet had a light taste.

The dish is priced at ¥870. Esuka is offered at more than 10 restaurants in the city, including New Mont Blanc, which also preserves the taste of the original Mont Blanc.

Another local treat is oranda senbei, or “Dutch senbei,” produced by the Hashiya confectionery shop, founded in 1950.

Unlike their namesake — senbei Japanese rice crackers — oranda senbei are waffle-like baked sweets made with flour. They have a mild sweet taste, and a moist, elastic mouthfeel.

Round and 15 centimeters in diameter, oranda senbei should be broken up into pieces and eaten. Hashiya’s main store sells oranda senbei fresh from the oven.

A set of four is priced at ¥250. A pack of broken pieces, priced at ¥120, is also popular among local residents.