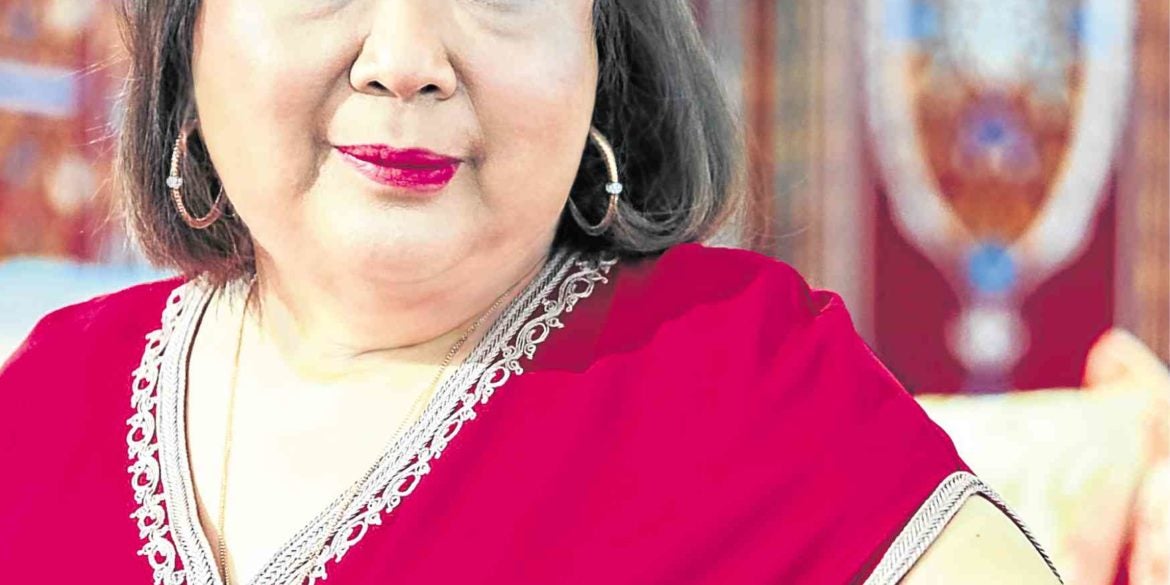 Tantoco: “Marrakech is my favorite because of the souks.” —LEO SABANGAN

As Rustan’s holds its 2nd Moroccan festival, she says, ‘This buying trip was more personal for me. It was like shopping for myself, my taste’

Morocco is a country very dear to her family’s heart, one they called home for decades—so dear that Marilen Tantoco let out a girlish laugh when we asked what she remembered most about living there as a young woman and, later, as a young mom to her two boys. Her mother, the late Rustan’s cofounder, Gliceria Tantoco, was a good friend of the late king of Morocco.

“Oh, there wasn’t much to see back in the day,” she deadpanned. “There was no infrastructure. It took us three hours to get to Casablanca instead of the one hour it takes today. But so much has changed. There’s never enough time whenever I visit.”

Tantoco, Rustan’s vice president for home merchandising, is also the country’s honorary consul general to Morocco, a position that brings her back to the country of her youth, where they still keep homes, both for official duties and for buying trips for Rustan’s.

When the Kingdom of Morocco opened its embassy here last year, the Tantocos held a Moroccan festival at Rustan’s, an event so successful that they’re doing it again this year. It’s going on at Rustan’s Makati.

Last year’s was the first Moroccan festival of the luxury retailer in 20 years.

Tantoco has very fond memories of the place, especially as a young mom to two children. “They grew up there, and we came back in 1994, when they were 9 and 7. I enjoyed my two boys’ growing-up years; my daughter wasn’t born yet. My second son now runs the family business in Morocco.”

Tantoco’s eyes lit up talking about Marrakech, her favorite, “because of the souks.”

“Last year, we sold out in a week, and even now people are already reserving,” she said of the vast collection of Moroccan wares displayed on the fifth floor of Rustan’s Makati. (The festival will later move to Rustan’s Shangri-La.)

Tables are laid out with a merry mix of patterns in the form of woven table linens, earthenware and ceramics, tagines and glassware. There are silver tea sets from Rabat and Salé, divider screens, woven utility boxes by Berber women, as well as throw pillows, carpets and rugs.

There are embroidered shawls, kaftans and djellabas, as well as slippers and bags.

“Last year, our selection was more commercial,” Tantoco says. “On this buying trip, it was more personal for me. It was like shopping for myself, my taste. So much has changed in Morocco even with the things you can buy. Before it was all very traditional. Now there’s more variety, very beautiful things.”

They will also be selling fresh dates and Moroccan saffron. For the second year, Café Casablanca will be set up on the 5th floor of Rustan’s Makati. Moroccan chef Rachida Bousta  will serve dishes like spiced lamb and couscous, which Tantoco raved about.

“I like entertaining friends and diplomats who visit Morocco,” she said. “In Marrakech, you have to stay at least four days. It’s amazingly not an expensive city, and everyone, including Cecile (Hermoso, Rustan’s division manager for home lifestyle and home luxury) here, just loves it there. People should go to the Sahara desert, the Hassan Il Mosque in Casablanca, the tombs of the kings in Rabat, and, of course, the beautiful home of Yves Saint Laurent.”

“You can’t help but fall in love with the place,” Hermoso added. “It’s indescribable. It has a different feel. And the people are very warm.”

“I’m already planning our next trip, just with my team here,” Tantoco said. “What’s not to love? It’s so picturesque and so many photo-ops.”