Eddie Baddeo: Even when he was very sick, he worried about others | Inquirer Lifestyle ❮ ❯ 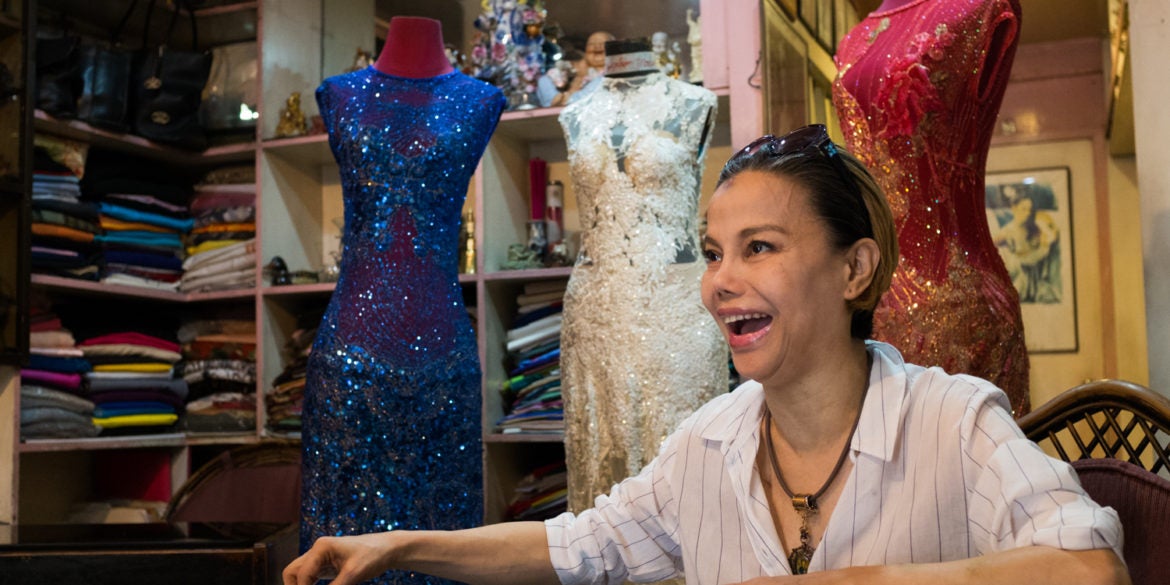 Baddeo, in his atelier in 2016, was known as much for his show-stopping designs as his works for various charities. —INQUIRER Photo

Eddie Baddeo: Even when he was very sick, he worried about others

The fashion designer, 58, died on the 33rd anniversary of his atelier

Eddie Baddeo laughed heartily on the phone when we called to ask if he was making any dresses for the Sona (State of the Nation Address), seeing the humor in our query.

This was in mid-2014, only a few months after he gave an affidavit on his role in the Janet Napoles and the PDAF (Priority and Development Assistance Fund) scam, ultimately becoming one of the whistleblowers.

The fashion designer had many clients among politicians and the moneyed set, including Napoles—connections that the convicted plunderer later exploited.

Baddeo, in his affidavit, said that it was he, on Napoles’ behest, who went around procuring signed letters from 44 mayors—most of whom were his loyal clients—asking for funding of P5 million each from the then agriculture secretary.

It was part of the elaborate P10-billion pork barrel scam that eventually landed Napoles in jail. In 2013, Baddeo told the Inquirer that he was in dire financial straits at the time and was paid by Napoles “a cash advance of P1 million” for his role.

Fast-forward to 2014. Baddeo expressed his trauma from the scandal, so that he wanted to steer clear of politicians, including the Sona, a typically busy time for his atelier on West Avenue in Quezon City.

“I’ll stick to doing clothes for real business people for now,” he said at the time.

Early Friday morning, Aug. 16, Baddeo died after a three-year battle with colorectal cancer. He was 58. He died on the day his atelier was marking its 33rd anniversary, his longtime partner Edgardo Medina wrote on Facebook.

Baddeo lies in state at Arlington Memorial Chapels on Araneta Avenue in Quezon City. His body will be cremated on Aug. 20.

Baddeo, “Shawie” to kin and friends, was well loved, known for his kindness and lively personality. He was known as much for his show-stopping designs as his works for various charities.

Baddeo got his first break as designer in 1979 in Boots Anson Roa’s family-owned garment factory, which made ready-to-wear for the likes of Rustan’s and SM. The young designer had just graduated from Samson Institute.

Later, he would hone his skills under former designer Robert Castañeda.

Baddeo’s often flamboyant and dramatic designs would gain a following among older socialites, though he also dressed their daughters and granddaughters.

Even as he was very sick, Baddeo continued to work, joining a benefit show for Marawi early this year at the Cultural Center of the Philippines, among other projects. He was set to launch his book, “Obra Maestra,” to mark his 33 years in fashion, in September, with a two-day show at CCP.

In early August, Medina rushed Baddeo to the hospital after he complained of chest pain. “Knowing Shawie, he must have been in pain even before that but he never complained until it became unbearable,” he told Lifestyle.

Tests showed the cancer had spread to his lungs and liver; he died 12 days later.

After Baddeo was diagnosed with stage 2 colorectal cancer in 2016, he switched to a healthier lifestyle, with a no-meat, all-vegetable diet and regular Zumba workouts, said Medina.

“The oncologists said that what kept Shawie going was his strong heart and sharp mind. Even when he could barely speak because he was wearing an oxygen mask, he was worried that his hospital guests weren’t being fed. So many came to see him every day. He was so loved.”

Baddeo, said his partner, “was very caring but he was also catty. He was quite chatty, which our friends preferred because they weren’t used to seeing Shawie quiet.”

Medina and Baddeo had been together since 1987, shortly after the designer set up his atelier. Medina was witness to how hard Baddeo worked for his family, to support his parents and send his siblings to school.

Baddeo was a meticulous craftsman, who pored over stitches and little details in the clothes his seamstresses made. “He got mad when the work was sloppy.”

Medina added, “He wasn’t demonstrative, even to me, but you felt how much he cared. It was so painful for me to let him go, but I saw how much he struggled to breathe. It was hard to watch, that in the end I asked God to take him.”

On the last night of the wake, there will be a tribute to Baddeo, with several of his designs to be worn by models. The CCP launch of his book will push through, said Medina.