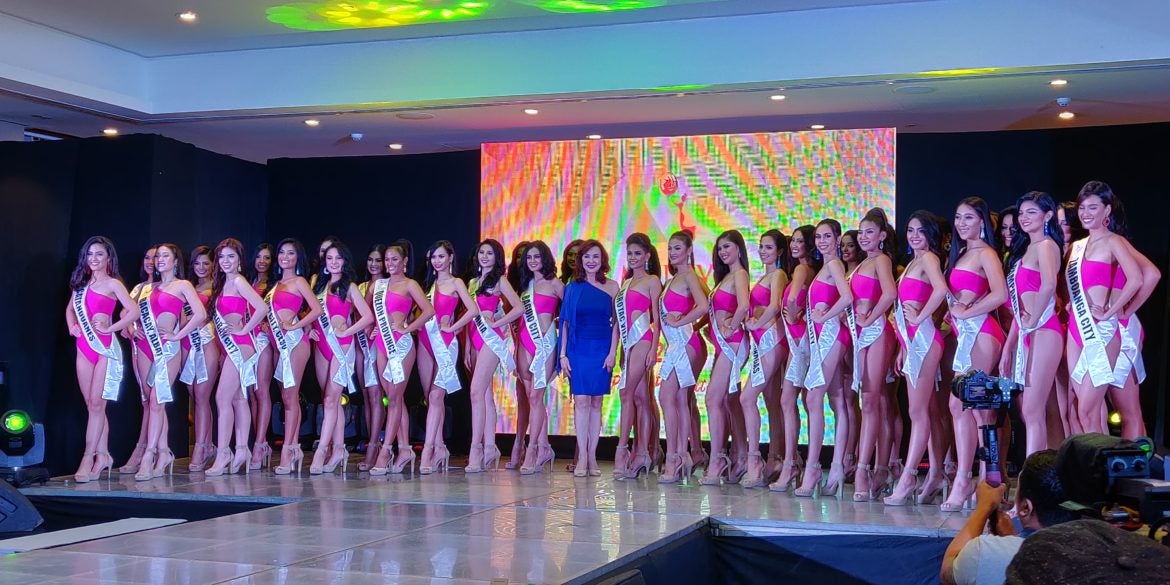 The 40 delegates to the 2019 Mutya Pilipinas pageant are unveiled to media at the Citadines Bay City Manila in Parañaque City on Aug. 1, 2019./ARMIN P. ADINA

MAKATI CITY—It’s a kind of hybrid different from modern cars running on electric and gasoline engines.

Beauty for those behind the Mutya Pilipinas pageant meant not only a pretty face, well proportioned body but also ability to shine on the catwalk.

So when the pageant declares its 2019 winners, a new title would be added, one requiring not only keeping a beautiful appearance but  also talent in modelling clothes.

The new title would be called Mutya-World Top Model. It would be on top of the titles Mutya Asia Pacific International and Mutya Tourism International.

“There is a thin line between a model and a beauty queen,” said Cory Quirino, new president of Mutya for its 2019 edition. “We welcome all aspiring women who wish for success on the catwalk and the beauty pageant stage,” she said.

Mutya Chair Fred Yuson said, “these are exciting times for Mutya Pilipinas, so you can expect more positive changes in the future as it evolves.”

Such excitement could be reflected in the edit of the pageant name. From Mutya ng Pilipinas, it is now just Mutya Pilipinas.

Quirino said it is a sign of the pageant’s thrust to modernize. She did not explain why the Filipino conjunctive “ng” was considered antiquated.

But she and Yuson said they were confident the pageant’s transition into “hybrid” would produce not just pretty faces and voluptuous bodies but also great models.

Mutya tapped the Professional Models Association of the Philippines (PMAP) to help select and mold the Mutya queen for the 2019 World Top Model contest, with its current head Anna Sideco at the helm of preparations.

Sideco said her group was ready to train beauty queens as models not only for international competitions but also for photographers.

“The World Top Model winner and contestants can become major models,” she said.

The Mutya-Top Model of the World winner will compete in the 2019 World Top Model contest in Monaco in December and could get  €200,000 if she won in the bigger arena.

With the new crown, Mutya has also decided to let go of two titles—the Mutya-Tourism Queen of the Year International, and Mutya-Global Beauty Queen because these have become extinct in the global stage.

Without any global competition to join, 2018 Mutya-Tourism Queen of the Year International Keshapornam Ramachandran of Iloilo, and 2018 Mutya-Global Beauty Queen Pauline Amelincx of Bohol were stuck in the Philippines.

Mutya queen Leren Mae Bautista won the Miss Tourism Queen of the Year International crown in 2015. This year, she will participate in the Miss Globe contest in Montenegro as a Binibining Pilipinas titleholder.

The Philippines has not yet won a crown in the Korea-based Miss Global Beauty Queen contest.

But the national pageant will continue to award the Mutya-Overseas Communities crown as a testament to its effort to recognize Filipino achievements abroad.

The title goes to someone sent by Mutya’s overseas Filipino community partners throughout the years.

Forty delegates from the Philippines and abroad will strut their stuff  at the 2019 Mutya Pilipinas coronation night at the Mall of Asia Arena in Pasay City on Aug. 18.