‘Stuber’’s laughs make up for its lapses | Inquirer Lifestyle 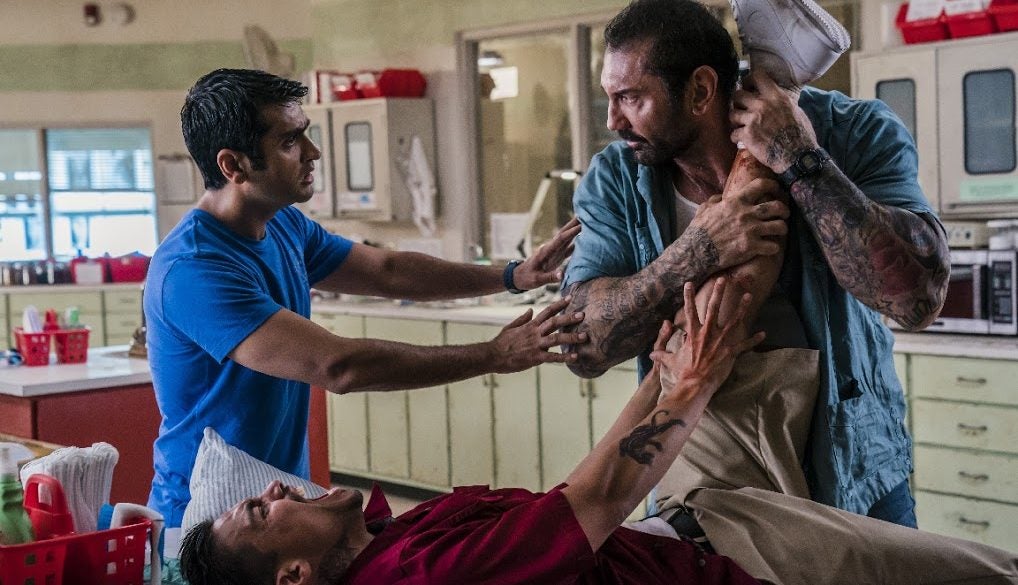 Kumali Nanjani is Stu and Dave Bautista is Vic, the odd couple in Stuber.

‘Stuber’’s laughs make up for its lapses

The new movie “Stuber” is a mishmash of a few different genres: buddy cop, odd couple/pairing, even road trip (beyond the most obvious action/comedy hybrid). Former wrestler Dave Bautista (Drax from the Marvel movies) is the Big Guy, a cop named Vic Manning who for two years has been on the hunt for a top figure in the drug world named Tedjo (played by Iko Uwais). Kumail Nanjiani is the Normal Dude, an Uber driver named Stu (hence the title, hyuk hyuk) holding down two jobs while in love with his college friend who keeps “dating jerks.”

The story kicks off when Vic, having just gotten Lasik surgery to deal with his failing eyesight, gets a hot tip about an exchange where Tedjo will be present. Still healing, not supposed to drive or do most things that require sight, he persists anyway and immediately crashes his car, whereupon he calls for an Uber, and naturally, Stu appears. Then hilarity ensues as Stu gets roped into Vic’s mission to collar Tedjo.

Director Michael Dowse is no stranger to comedy: the surprising “Goon” from 2011 was a delight, and he did good work on episodes of “Man Seeking Woman.” That helps here, as Tripper Clancy’s script (with, one imagines, some improv from Nanjiani) rarely lets more than a few moments slip by without inserting some kind of joke, whether huge or small. This makes for a steady pace, though your mileage may vary: while there are a lot of good jokes there are also the occasional lazy or weak ones. Thankfully, you don’t have to wait long before another one comes. A heart-to-heart Stu has with a dancer at a strip club is a highlight, upending expected tropes.

Alas, it’s the action part of the equation that’s lackluster. There’s a particularly egregious mistake in wasting Iko Uwais, who doesn’t really get a personality to go with his character besides “bad guy.” He barely even has any lines. While this may not be wholly unexpected (“Star Wars Episode 7: A Force Awakens” did him the same bad), the real head-
scratcher is why you would cast one of the best movie martial artists in the world and then shoot his fights in tight shots and edit them in a slapdash manner where you can hardly make out what’s going on. We could’ve had some real awesomesauce here with some creative choreography and, y’know, shots where you can see the fight unfold. There’s also a surprising amount of detail in the violence: multiple headshots, a thumb through a gunshot wound, and a tray of fishing lures striking a face, among others. That hard grit hardly seems justified given the comedy, and feels like it’s meant to add weight to a plot that never earned it.

Be glad, then, that the natural chemistry between Bautista and Nanjiani, and the steady stream of japes and asides, makes up for the rest. Naturally, their complementary personalities forces each other to address their particular life problems: Vic’s with his neglected sculptor daughter (Natalie Morales, always welcome) and Stu’s with his object of longing (Betty Gilpin, having a lot of fun as an increasingly soused spurned spin class instructor). These moments don’t overstay their welcome, and are handled well enough without delving into being maudlin (even successfully navigating the potential problematic nuances of a friendzoned friend and what he expects out of a friendship).

While a bit short on quality action (mixing the comedy with it helps it go down), “Stuber”’s real strength lies in its leads, and has enough fun with itself that you’re more forgiving of its flaws.