Will scream, will spend – all for ‘saranghaeyo!’ | Lifestyle.INQ ❮ ❯ 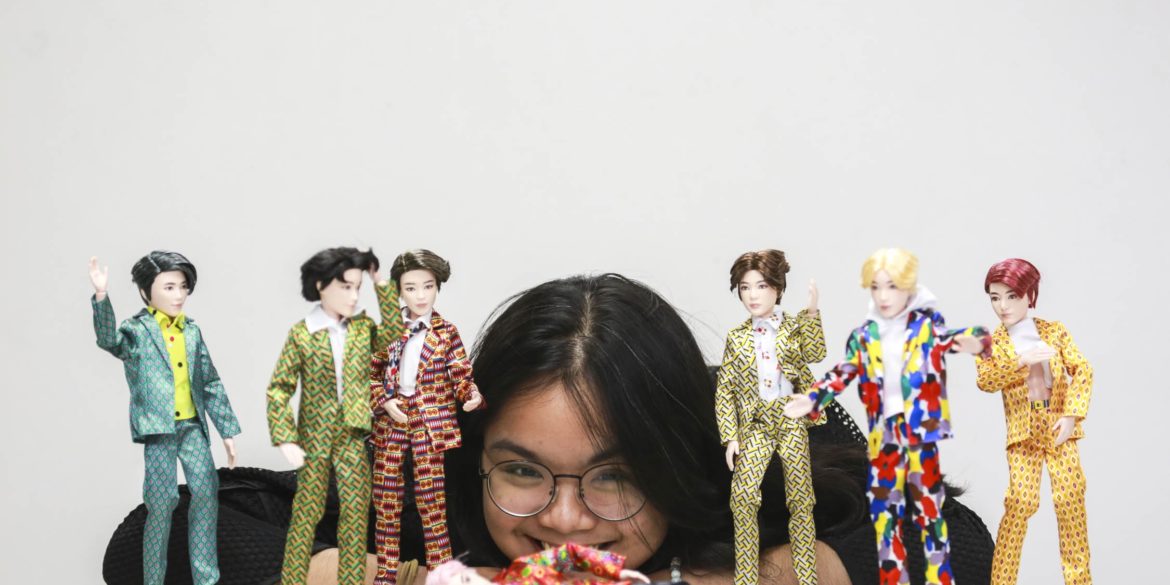 Will scream, will spend – all for ‘saranghaeyo!’

The very picture of unrequited love, a K-pop fan stood beside the barricade of a concert ground, desperate for a single glance, a quick touch and the music of that declaration of love: “Saranghaeyo.”

But despite the shortness of her breath and the chilling in her bones, she had never felt more alive.

“My biggest achievement as a fan was being able to stand beside the stage barricade,” says Lorraine Toledo, a 23-year-old medical student and fan of the K-pop group iKON. “I was able to get close to [my idols], say hi to them and touch their faces. Not everyone would have that chance.”

Toledo is just one of the legions of Filipinos spiraling into Korean fandom, spending not only vital amounts of time ogling their idols but also thousands of pesos on concert tickets and merchandise.

Another is Bernadette Garcia, a fan of Bangtan Sonyeondan, or BTS.

“Fangirling is expensive, but it’s worth it. It’s like having a part of [our idols] with us,” she says.

Garcia, 29, juggles her roles as government employee and mother to her 5-year-old son along with being head administrator of BTS Army PH, which has 150,000 members from all over the Philippines — it is one of the many BTS fan bases in the country. She makes makes sure she doesn’t drop any of her roles.

During her free time at work or while doing household chores, she updates Army’s social media site, votes BTS for awards using multiple accounts, listens to its songs, or streams its music videos.

She has all the albums of BTS, from its debut to the latest, each costing from P900 to P1,500. In attending the group’s events, she sometimes brings along her son who, she says, has now also become a BTS fan.

Her husband and the rest of the family approve.

The Korean wave, known as “Hallyu,” is the “rapid spread of Korean culture in the form of drama, dance, music, as well as fan clubs for Korean stars,” according to Jay-ar Igna, an instructor at the University of the Philippines Diliman.

GMA in turn aired the first Koreanovela, or K-drama in Philippine TV, “Successful Story of a Bright Girl,” which barely drew notice. But its second K-drama, “Endless Love 1: Autumn in my Heart,” became a hit among Filipino viewers.

Realizing the impact of K-drama, ABS-CBN aired the Koreanovela “The Truth.”

The competition led to the popularity of K-drama in the country, as well as the introduction of Korean music through the dramas’ theme songs.

But Igna noted that Korean music did not win the hearts of many Filipinos as Korean singers were not as popular as the actors and their songs were not translated in English.

It was only when visually appealing Korean singers engaging audiences with catchy and upbeat songs, albeit in the Korean language, made the rounds in the media that K-pop fandom began to grow in the Philippines, helped along by the staging of concerts and clever merchandising.

From the perspective of nonfans, K-pop fandom in the country seems strange: Why consume it when you can’t understand it?

Michelle Correa, a Korean specialist and lecturer at the Ateneo de Manila University, points out in an email interview that with the use of the internet, access to Hallyu content is easier.

“There are a lot of active fansubbers who will gladly translate from Korean to English, or any other language, just to spread the love for Hallyu,” Correa says, adding: “So you don’t just consume content, you are [also] part of creating it.”

Furthermore, the “intentional” repetition of certain lines and syllables makes Korean songs catchy, “so people who may not know how to speak Korean may still be able to follow the songs,” says Gilbert Que, an expert in popular culture, media and Hallyu. He is also a lecturer at Ateneo.

K-pop’s dance choreography is also easy to learn, says Que. People can imitate the steps while enjoying the music, and some dance parts include more difficult steps to showcase the Korean artists’ skills.

The music videos were also carefully planned and directed, and have “striking aesthetics” that Filipinos are not used to.

Aside from the formulaic appeal, Correa says, Filipinos are drawn to K-pop because it is a “return to Asian-ness” after being bombarded with Western culture and standards.

“Before the popularity of K-pop, Western music and related cultural products dominated the scene … With the coming of K-pop, we are rediscovering our Asian-ness. We see more Filipino celebrities with Asian features … We are also more accepting of our Asian features and we highlight them nowadays, particularly in K-beauty,” Correa says.

For Toledo, iKON is a reflection of inspiration and hard work.

“I feel like I grew up with [iKON],” says Toledo. “I witnessed their growth as artists before their debut and watched their reality shows where I saw their hardships. The value of hard work to achieve your dreams … They reflected that.”

Korean artists train for a long time before debuting as idols—that is, if the management thinks they are good enough to be idols, Que observes.

That is why, he says, background stories, training videos and reality shows that feature their struggle during their training days somewhat “humanize the celebrities” and elicit admiration from fans.

He adds: “Fans go out of their way to support their biases because of how they relate and connect to their idols. Usually they see a part of themselves in their idols that was never realized.”

During their fan base’s events, Garcia says, most of the funds and gifts collected usually go to donations or to set up charity activities. Last April, Army conducted a fan gathering and the proceeds went to Unicef Philippines; last June, it donated to Cara Welfare Philippines to celebrate BTS’ anniversary.

Why does Army engage in such philanthropy? “It’s what BTS would do, so we do it as well,” Garcia says. BTS is known to campaign against bullying.

Although being part of K-pop fandom may cost a lot, the fans bask in the odd luxury of a community with the same passion and quirks, and are rewarded by a sense of belonging.

“Unlike being a fan of Western music groups or artists, K-pop has a different kind of fandom. It’s like a community, a family, or a tight-knit group of friends,” Correa says.

This suits the affinity of Filipinos for belonging to a group, she says.

Says Igna in an interview: “K-pop becomes a binding mechanism for different fans with different backgrounds … It promotes friendship and camaraderie among them.”

On the other hand, Garcia says, being a K-pop fan in the Philippines is difficult and tantamount to swimming in a tumultuous sea of judgments.

Still, one thing remains important: K-pop fans are happy doing what they do.

“Other people would say that I don’t know [my idols] and they do not know me. That might be true, but the happiness they give me [is] different,” Toledo says.

For Correa, harmless fanaticism is a “fun part of youth,” and can foster understanding among peoples of the world.

But all things extreme scream danger.

In the spectrum of Hallyu adulation lurk the “sasaeng,” or obsessed fans disrupting the privacy of their idols in a manner that could actually be harmful. If one’s way of being a fan becomes this extreme, Que says, he or she should find alternatives or, in certain cases, seek professional help.