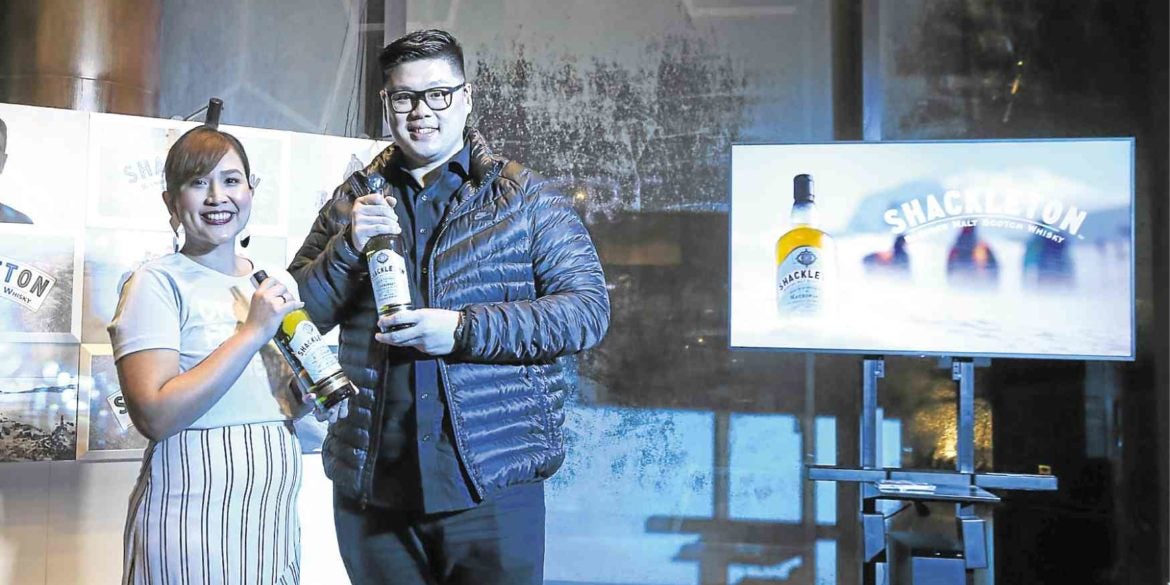 In the freezing cold, ‘antique whisky’ comes to life

The British scotch brand recently held a tasting event at Landers Superstores in Arcovia City, a new township development in Pasig by Megaworld. At the grand showroom, we were told about the storied origins of Shackleton Blended Malt Scotch Whisky.

It is the story of Sir Ernest Shackleton, a legendary British explorer who, in 1907, journeyed to the tip of the South Pole. But the trip was unsuccessful and Shackleton needed to abandon the quest, 97 miles short of reaching the target.

The expedition needed to abandon almost all its supplies to escape the harsh conditions. Among the supplies left were three crates of Mackinlay’s Rare Old Highland Malt Whisky.

Fast-forward to 2007, when 11 unopened bottles of Mackinlay’s, frozen in polar ice, were discovered at Sir Ernest’s hut in Cape Royds near Antarctica. The story goes that a preservation team, intending to restore Sir Ernest’s Antarctic hut, found the crates by happenstance.

The bottles were thawed and turned over to the New Zealand Antarctic Heritage Trust. Whyte and Mackay master blender Richard Paterson studied the “antique whisky” and recreated the drink, now named after Shackleton.

Guests at the event were ushered into a tent filled with bottles of the new blended malt scotch whisky. They learned the history of the drink while sampling it, the better to absorb and appreciate Shackleton’s subtle flavors.

And then everyone proceeded to an adjacent truck with a flash-freezing facility. Guests went inside the giant freezer, their drinks on hand—in a recreation of how Shackleton and his crew kept warm during the Antarctic expedition.

Temperature went below 10°C. We shivered from the freezing cold, but the whisky really helped, and the coldness released some flavors not present in normal temperatures.

After a few more minutes, we could no longer bear the cold, and so, like Shackleton himself, we needed to abandon the situation to get warm.

It was embarrassing, because Shackleton spent 122 days in the Antarctic, while we couldn’t stay in the freezer even for a few minutes.

But whisky fans can try it for themselves, as the brand plans to bring its ice truck all over the metro. Arcovia was the start.

“We will be giving an interactive tasting experience where the flavor notes of our blended malt will come to life,” said Pia Bonalos-Mercado, Shackleton brand manager.—CONTRIBUTED