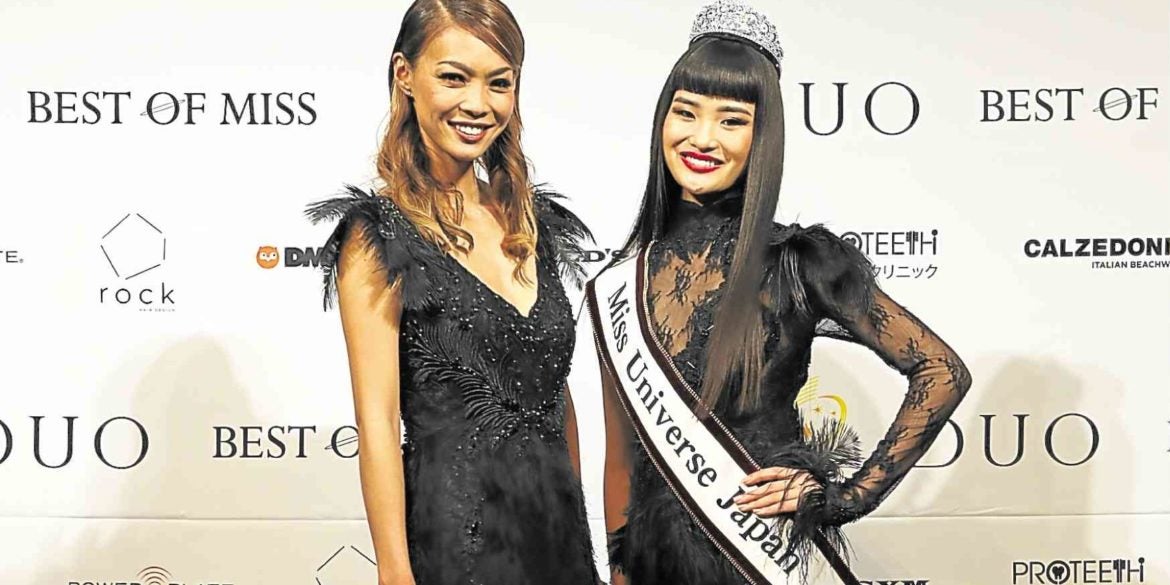 The Philippines is becoming a source of beauty-queen wardrobe. Some candidates even flew to Manila to shop at Rustan’s

Since Mima took over the helm of Miss Universe Japan, she had been busy preparing for her first national pageant that selected the Miss Japan who will compete in the 2019 Miss Universe.

It was still a month before the Miss Japan finals this August, but Mima wanted enough time to finalize the wardrobe for the 16 candidates; thus, our conversation.

Mima wanted to tap Filipino designers for the candidates.

Joel Escober is no stranger to the Miss Japan pageant. I tapped him a year ago and collaborated with him and Mima on the competition gowns of Miss Japan 2018 Yuumi Kato for the Miss Universe pageant in Bangkok.

This would be his second year to collaborate with Miss Universe Japan.

The day before we were to ship the gowns to Tokyo, Escober’s seamstresses were still doing finishing touches on some of the pieces. Luckily the collection made it before deadline. (And the gowns were not as heavy as we expected, thus no excess baggage.)

Apparently, the Philippines has become a go-to source of beauty-pageant wardrobe since Filipino designers, through the decades, have mastered the winning looks for beauty queens, starting in the 1960s, when the country won its first victory in a worldwide beauty pageant—Gemma Cruz crowned as 1964 Miss International. 1973 Miss Universe Margie Moran wore an Auggie Cordero.

The Philippines has also become a shopping destination for foreign beauty queens preparing for pageants.

A number of 2019 Miss Japan candidates, for instance, flew to Manila to get their gowns made by our designers or to shop in our stores.

The new Miss Japan, Ako Kamo, bought part of her wardrobe at Rustan’s.

Mima initially asked Escober not to make new pieces, planning just to use existing gowns, but Escober wanted to go the extra mile and created 13 looks for the Miss Japan pageant.

“I want the looks to be cohesive,” Escober told Lifestyle. “Besides, my staff’s morale was high because we were doing this as a Filipino team showcasing our work on an international stage.”

The Japanese love Escober’s aesthetics—ultra-feminine, romantic and dramatic. His play of lace and embroidery to create an edgy look brings out the artisan in him.

The vision of Miss Universe Japan under Mima is to bring back the edginess and fashion-forward bent of Miss Japan, just like when Ines Ligron, the former national director, was at the helm.

At that time, people would look forward to what the Miss Japan candidates would be wearing—including luxury designer brands such as Gucci, Etro, Valentino.

However, Mima will digress a bit from that. She explained to Lifestyle her current choice: “Filipino designers have a way of making Asian women look sexy.”

She finds the pieces made  for Miss Japan to be fashionable, stylish and on-trend.

“When I started doing the collection, I was thinking of doing something really soft but with a hint of fierceness and drama,” Escober said. “I’m imagining a warrior in an arena, ready to fight—executed in very soft, elegant fabrics like soft lace, French lace, Japanese tulle and ostrich feathers.”

Distance was no deterrent to the collaboration, even if Escober didn’t personally meet the finalists. Thanks to social media, he checked the Miss Universe Japan Facebook, and Instagram of the candidates.

He tried to avoid pastels but kept the blush because it complemented the skin tone of the girls. He used mostly strong, solid colors like red, or black.

The highlight of the Miss Japan pageant was when the finalists were called onstage for the final judging. They were in Escober, walked the stage to the song “Never Enough” from the movie “The Greatest Showman.”

The first finalist to be called was 21-year-old Ako Kamo, looking regal in a dramatic, high-neck sheer top with lace sleeves and a soft serpentine skirt embellished with black crystals and ostrich feathers.

Kamo, who hails from Kobe in Hyogo prefecture, was crowned Miss Japan and will compete in this year’s Miss Universe.

What’s significant is that she was an exchange student in the Philippines in 2017. She studied at the Assumption San Lorenzo in Makati for six months.

“I was interested in the Philippines because of the culture, the people, food and also there’s no winter,” Kamo told us.

Back in grade school at Obayashi Sacred Heart School, she helped in fundraising activities for poor communities in the Philippines.

For the 2019 Miss Universe pageant—the place and date have yet to be announced— Kamo will have a team of Filipino designers to make her wardrobe.