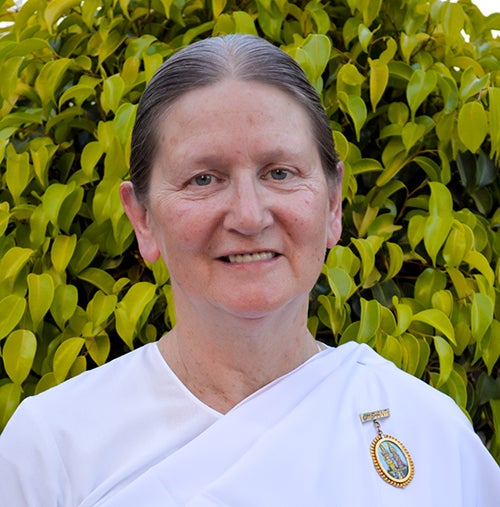 Now she is coordinator of the Overseas Communications Center for the Brahma Kumaris’ Godlywood Studio in Rajasthan, India, preparing international content that are broadcast over Peace of Mind TV.

She has become known to about a million Raja Yoga students around the world as BK Denise, a senior teacher and author who travels extensively, giving public lectures and conducting seminars, retreats and conferences. She has been to the Philippines eight times since 1995 (she spoke to “Yolanda” survivors and community rebuilders in 2014), and is back for a series of 13 free talks that will take her to eight cities across the country starting Friday, Sept. 6.

The talks will cover such timely topics as mental wellness, inner peace, karma and choice, silencing the mind, emotional detox and self-care.

Here are some choice cuts from Lawrence’s previous lectures:

Are karma and destiny one and the same?

Karma is the Hindi word for “action,” or “the sum of a person’s actions.” When I say that whatever is happening to me is the direct consequence of my karma, that is true, but only to some extent. There are two other forces constantly at work. One is free will, or choice; the other is destiny. In olden times, destiny was also called providence… a word used to explain “the way things are.”

There is this prayer, “God, grant me the serenity to accept the things I cannot change, the courage to change the things I can, and the wisdom to know the difference.” Where is choice here, and where is destiny?

What I should be trying to find is the wisdom in there, which brings the acceptance. When I figure that out, everything else will follow and I will find contentment.

When is a person said to be truly carefree?

During a performance, a gifted musician may look as though he doesn’t care about technique. In truth, he has mastered technique to such an extent that he can forget he is even employing it. Then he is free to simply… express. In human relations, I  need to become so sensitive, so skilled in my “technique” of accurately responding to what is happening around me, that my interactions—performances—become flawless. In essence: To be truly carefree, I should first be careful.

What does it mean, to be real?

Every person is like an individual note played in a unique tone. All together, we make music. The music is beautiful when the instruments that produce the notes are finely tuned and everyone’s got the tempo, melody and mood down.  When people are confident because they hide nothing, they are happy just to make good music together.  That is being real.

“It might have been” is a phrase that stings. How do I avoid regrets?

Every situation has aspects that either uplift me or pull me down. I must see, discern and choose… quickly. The window for deciding is usually a small one— sometimes all of one second, during which I should recognize the moment and catch it. When I am preoccupied, inattentive, or influenced by uncertainty or insecurity, I miss that moment.

I feel bad that sometimes I have to wear a mask in my interactions. Is that being deceptive?

That is also called a “performance,” and it is normal to want to be skilled at it.  Behind the mask is the real me. When the atmosphere is secure and nurturing, I come out from behind the mask and reveal myself to someone who, hopefully, will do the same. Then we can be mirrors for each another.

In moments of confusion, how do I know that what I am hearing is the dictate of my conscience?

The most valuable part of consciousness is conscience. I should listen to that internal voice and disregard all other external voices that I have internalized over the years, but which confuse me.  My conscience is my best friend, yet I often disregard it.  Thus, I betray myself.  I should silence those other voices and say, “You are not the truth; the truth is inside me.”

My conscience is faithful, true and honorable.  It will not allow me to do something that is below my highest standards. When my conscience is acknowledged and heeded, I become fulfilled, invincible, whole.