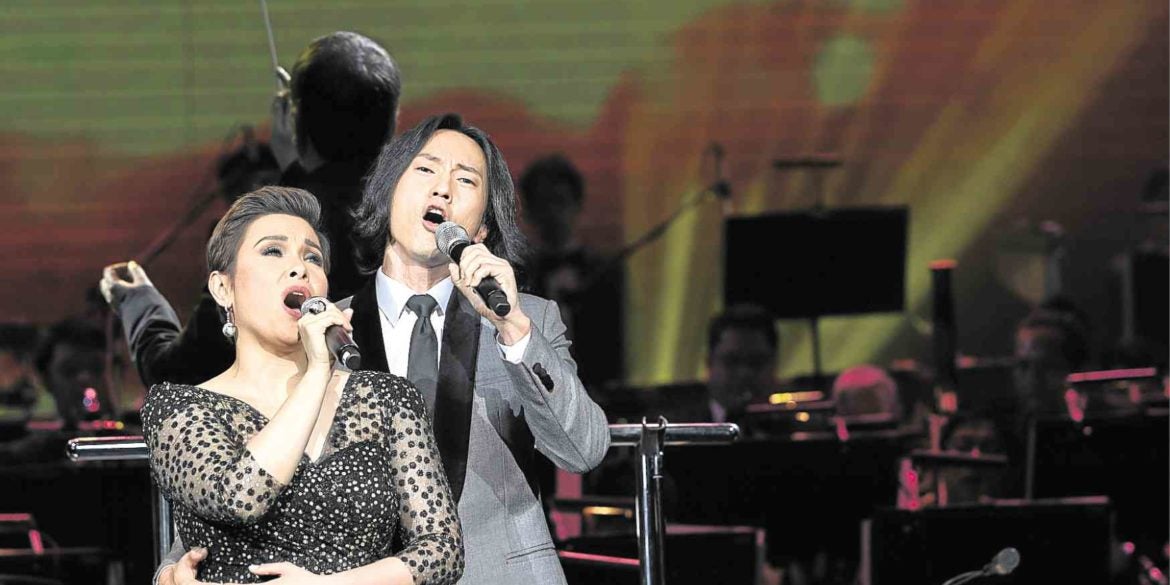 In concert at the Philippine International Convention Center last year to celebrate her 40th anniversary in show business, Lea Salonga was joined by Simon Bowman, who flew all the way from the United Kingdom, where, 30 years ago, the two headlined the West End premiere of “Miss Saigon.”

Last weekend, Salonga hit the concert stage again in “Perfect Ten,” backed by the ABS-CBN Philharmonic Orchestra under her brother Gerard, to celebrate Resorts World Manila’s first decade. This time, she was joined by another “Saigon” costar: Michael K. Lee, who appeared alongside her during the final month of the musical’s original Broadway production.

The evening’s set list consisted of songs Salonga had sung before; no surprise that she knocked them out of the park yet again, her astoundingly crystalline sound still peerless hereabouts (or anywhere else, really).

The highlights included the Broadway anthems “Still Hurting” from “The Last Five Years” and “Back to Before” from “Ragtime,” as well as the Barbra Streisand original “Evergreen,” all rendered with stark emotional transparency. And her “Les Miserables” staple, “On My Own,” was a real treat—performed in full, which she doesn’t do very often nowadays.

There were also other guests: Tanya Manalang (with a ravishing, gender-swapped “Out There” from “The Hunchback of Notre Dame”), Salonga’s daughter Nicole Chien and an underutilized Esang de Torres.

But the chief surprise came in the form of Lee—though this wasn’t his first time appearing on the Manila stage (he played opposite Salonga in the 2000 production of “They’re Playing Our Song”).

An established musical theater actor in both America and Seoul, Lee got to sing only two solos that night—“’Til I Hear You Sing” from “Love Never Dies,” the sequel to Andrew Lloyd Webber’s “The Phantom of the Opera”; and “This Is the Moment,” which many Filipinos would recognize from karaoke sessions and singing contests, but is actually from the musical “Jekyll and Hyde.”

Two plum songs were enough to unveil the titanic breadth of Lee’s talent as a vocalist. With seemingly inhuman ease, he scaled those punishing notes, each number a transfixing performance that crescendoed almost without notice, and made even more jaw-dropping for the remarkable quiet of his technique (if anyone heard him inhale between phrases, do notify us).

Lee appears to be that rare leading man—deft with both bombast (see: the aforementioned songs) and soft boys (as when he did Aladdin in “A Whole New World,” or even the male parts in the “Saigon” medley of “Sun and Moon” and “The Last Night of the World”).

Salonga was deservedly the star of the show, of course, but Lee made you realize your sheer luck (and probably wise decision-making) to have caught this particular concert. As he walked off the stage, there wasn’t a more perfect moment for that oft-chanted concert mantra: More! —CONTRIBUTED