The A to Z of Disney+ | Lifestyle.INQ ❮ ❯ 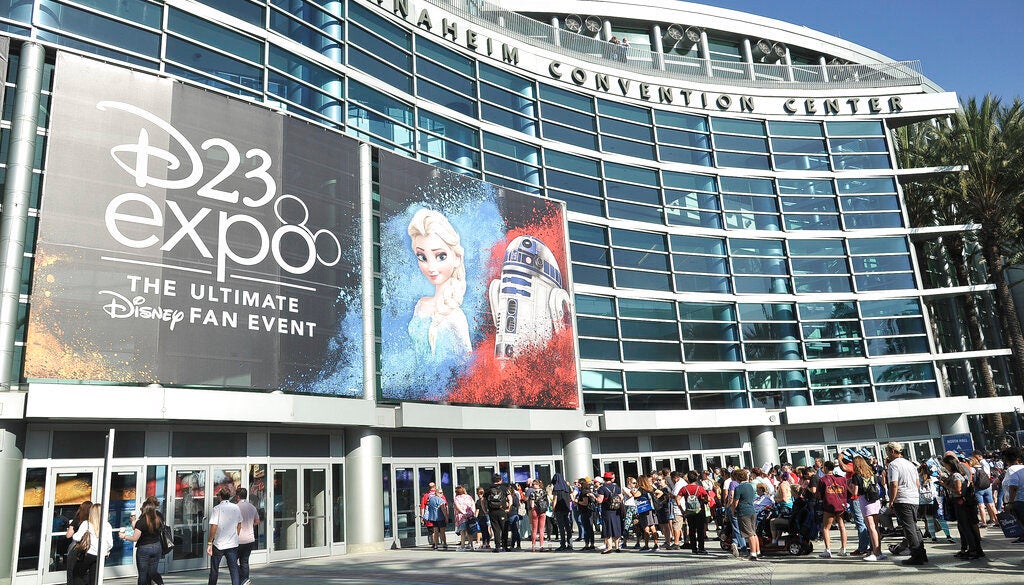 People line up in front of the Anaheim Convention Center during the 2019 D23 Expo on Saturday, Aug. 24, 2019, in Anaheim, Calif. (Photo by Richard Shotwell/Invision/AP)

The A to Z of Disney+

The first ever Disney+ Showcase panel at D23 Expo at the Anaheim Convention Center made our heads spin with big announcements, sneak peeks and surprise guests. But those of us who live outside of the United States had one question: when is the streaming service coming to our part of the world?

The US, Canada and The Netherlands will get to start using Disney+ on Nov. 12 with Australia and New Zealand following on Nov. 19. But the rest of us will have to wait a little more. “We are moving across Europe and Asia fairly quickly so I think it’s a roll out I think people around the world will be quite happy with,” Kevin Mayer, chair of The Walt Disney Company’s Direct-to-Consumer and International unit, told the press at D23 Expo.

Here’s everything else we know about Disney+ so far.

A –
Anna Kendrick and Bill Hader star in the holiday comedy “Noelle.” In the film, Anna plays Noelle, Kris Kringle’s daughter, who has to find her brother Nick (played by Bill), in order to save Christmas. “I’ve always wanted to be in a Christmas movie,” said Anna at the Disney+ panel at the D23 Expo. “Please watch it every Christmas.” Those with access to Disney+ will be able to watch “Noelle” when the service launches on Nov. 12.

B –
Bob Iger, chair and CEO of The Walt Disney Company said, “Our new direct-to-consumer businesses are focusing on giving people unprecedented access to all of our great storytelling, our vast library of shows and movies, as well as all recent releases and future films.” Expect a bounty of entertainment that includes well over 100 original Disney movies and 5,000 episodes from Disney Channel shows. Kevin Mayer calls Disney+ “the ultimate and exclusive home of everything we make under Disney, Pixar, Marvel, Star Wars.”

D –
Love dogs? Disney+ has some treats for you. There’s “Togo,” a Disney+ original film that will tell the true story of the 1925 serum run to Nome. It stars Willem Dafoe as Leonhard Seppala, the owner of Togo, and will take you on an adventure with sled dogs and mushers who go on an important mission in the Alaskan tundra to save a town from an epidemic. And of course, there’s the live-action retelling of the 1955 animated classic “Lady and the Tramp.” Here’s a little tidbit that got us even more excited: the canine actors of this Disney+ original film are mostly rescues. “Lady and the Tramp” will stream on Nov. 12 while “Togo” will debut in December.

E –
“Encore!” is an unscripted series that reunites former high school musical casts to recreate their performance from years ago. Kristen Bell, who produces and hosts the show (and who Disney fans love as the voice of Anna in “Frozen,” said, “I’m a musical theater junkie and musical theater in high school was when I discovered who I was.” It debuts on Nov. 12.

F –
Pixar fans first met Forky (Tony Hale) in “Toy Story 4.” See more of the conflicted spork in “Forky Asks a Question,” his series of animated shorts, which premieres on Nov. 12. “What is love?” “What is money?” “What is time?” Find out the answers with Forky. Also coming to Disney+: Pixar’s “Monsters at Work.”

G –
“I’m excited to bring hope, joy and positivity to your homes,” said Gina Rodriguez, executive producer and recurring guest star of “Diary of a Female President.” This series, which streams in January, will tell the story of Elena (Tess Romero), a young Cuban-American girl in middle school on her way to becoming the president of the United States.

H –
Are you ready for this? “High School Musical: The Musical: The Series” is not a reboot nor is it a sequel. The 10-episode series, set at the real-life East High where the original movie was filmed, is about a group of students who are staging a production of “High School Musical.” Very meta, huh? The cast, which includes Joshua Bassett, Olivia Rodrigo, Matt Cornett, Sofia Wylie, Julia Lester, Larry Saperstein, Dara Reneé, Frankie A. Rodriguez, Kate Reinders and Mark St. Cyr, performed the hit song “We’re All in This Together” at D23 Expo. And 3,600 lucky fans had the chance to watch the show’s first episode. It starts streaming on Nov. 12.

J –
Want a big dose of Jeff Goldblum? You’ll get it on Disney+. He stars in the unscripted series “The World According to Jeff Goldblum” which will tackle things that fascinate him including sneakers, ice cream, jewelry, tattoos and more. Twelve episodes will be available on Nov. 12.

K –
Kermit the Frog had an announcement to make at D23 Expo: The Muppets are filming unscripted shorts for Disney+ called “Muppets Now.”

L –
We couldn’t believe it either but the hit show “Lizzie McGuire,” which first aired on the Disney Channel in 2001, is coming back, this time on Disney+. And yes, she will still be played by Hilary Duff, who was met with cheers when she walked onto the stage at Hall D23 at D23 Expo. “It’s so great to be home,” she said. In the series, Lizzie is almost 30 and working for a decorator in New York. “She has a bigger shoe budget, which is great,” Hilary said. We cannot wait to watch this show.

M –
People are really excited for Lucasfilm’s “The Mandalorian,” the upcoming Star Wars live-action series. Executive producers Jon Favreau, now a Disney Legend, and Dave Filoni and cast members Pedro Pascal, Gina Carano, Carl Weathers, Giancarlo Esposito, Taika Waititi (droid IG-11) and Ming-Na Wen (also a new Disney Legend) were at the D23 Expo. The series, which takes place after the fall of the Empire and before the emergence of the First Order, will send audiences on a journey with a lone gunfighter in the outer reaches of the galaxy, away from the New Republic.

Dave said, “What I loved about the script was it really felt like Star Wars to me.”

N –
Disney+ will be the streaming home of National Geographic. There will be 600 hours of Nat Geo content on the service, said Bob Iger.

O –
“One Day at Disney” is a behind-the-scenes look at some of the many many people around the world who make Disney magic come to life. The Disney+ short-form series will kick off with a feature-length documentary on Dec. 3. There’s a 224-page coffee table book too that will come out on the same day.

P –
An all-new “Phineas and Ferb” original movie “Phineas and Ferb the Movie: Candace Against the Universe” is headed to Disney+ along with all 127 episodes of the series. Fans of the show are delighted. They’ll have to wait a bit to see the movie though—it will be out in 2020.

R –
“Rogue One: A Star Wars Story” stars Diego Luna and Alan Tudyk will star in a “Rogue One” prequel for Disney+. “It’s been a hard three years. I’ve been waiting for this call,” said Diego, who plays Cassian Jeron Andor. The prequel will show Cassian’s adventures as a rebel spy before “A New Hope.” And speaking of Star Wars, you probably already know this, but Ewan McGregor will return as Obi-Wan Kenobi in a new untitled Lucasfilm series for Disney+.

S –
All thirty seasons of “The Simpsons” will exclusively be on Disney+ when it launches, thanks to The Walt Disney Company’s acquisition of 21st Century Fox. To quote Homer, “Woo hoo!”

T –
“Timmy Failure: Mistakes Were Made,” a Disney+ original film based on the bestselling book series by Stephan Pastis will launch in early 2020. Our first look at the movie, which was directed by Tom McCarthy and cowritten by him and Stephan, made us excited to see more of the young detective Timmy and his unusual partner—a 1,500-pound polar bear.

U –
Disney+ users get to enjoy unlimited downloads up to 10 mobile devices. There are no constraints on the number of times a title can be downloaded each year. According to Kevin Mayer, each subscription gets seven different accounts, seven passwords and four concurrent streams. You can choose an avatar from over 200 Disney, Pixar, Marvel or Star Wars characters for each profile.

V –
One of Marvel’s favorite villains Loki will get his own Disney+ series. Tom Hiddleston, who plays the god of mischief, spoke to fans at D23 Expo in a video: “This journey you and I have been on isn’t over yet. In fact, it’s only just begun.” It will debut in 2021.

W –
Described as “half classic sitcom and half full Marvel Cinematic Universe spectacular,” “WandaVision” stars Paul Bettany as Vision and Elizabeth Olsen as Wanda Maximoff. Kat Dennings and Randall Park also join the cast, reprising their roles from “Thor” and “Ant-Man and The Wasp.” Kathryn Hahn will also be part of the series. It will premiere in 2021. “This is going to be so wacky and fun,” said Elizabeth.

X –
Here are more reasons for Marvel fans to get extra excited: Marvel Studios president Kevin Feige announced three more shows that are in development—“Ms. Marvel,” “Moon Knight” and “She-Hulk.” There’s “The Falcon and The Winter Soldier” which stars Anthony Mackie, Sebastian Stan, Emily VanCamp (Sharon Carter) and Wyatt Russell (John Walker) and will come out in 2020. And there’s also Marvel Studios’ first animated series “What If…?” which features different heroes from the Marvel Cinematic Universe and explores how their lives would be different if the events in the films didn’t unfold the way they did. The series will premiere in 2021.

Y –
YA fans will be thrilled to know that “Stargirl,” the coming-of-age Disney+ original film based on the critically acclaimed and bestselling young adult novel by Jerry Spinelli, will launch in early 2020. The movie stars Grace VanderWaal and Graham Verchere.

Z –
“Zootopia” and a ton of other animated titles from Disney and Pixar will of course be available on Disney+. Other films include “101 Dalmatians,” “Frozen,” “Lilo & Stitch,” “Bambi,” “The Little Mermaid” and many more.