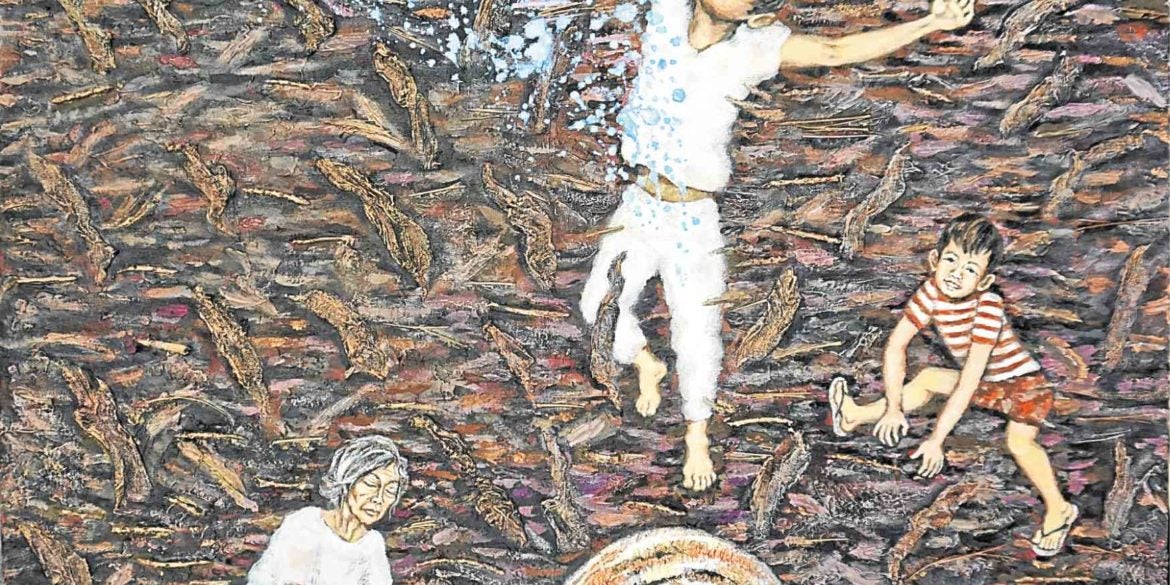 “This is 22nd lang pala,” says the youngish-looking artist. “Not too many for 48 years’ work.” To think that these words come from one who has had a string of awards not only in the Philippines but overseas as well.

Those years were nothing to scoff at, considering that while she pursued her muse all those years, she has also taken care of hearth and home, raising three children, and looked after her husband, grandchildren and a sick mother.

Just imagine the paintings she did that form part of the collections of great institutions such as Bangko Sentral ng Pilipinas, National Museum, Cultural Center of the Philippines, Metropolitan Museum of Manila, Ateneo de Manila University, On the Third Day Institute for Renewal, University of the Philippines Bulwagan ng Dangal and Deutsche Bank.

There is, indeed, something in this woman who describes herself as “inseparably woman, citizen, Filipina, artist, wife, mother, grandmother, sister and friend.”

Cajipe-Endaya says the exhibit “Caracol” is her meditation upon a slug. “Caracol” is Spanish for snail, but it is also a Filipino term for a devotional ritual dance-procession in a spiral trail.

“A big snail turned up after the first gentle rain on my edible garden which I started during a hopelessly dry spell,” she says. “Instantly, I was overjoyed seeing the slow-moving mollusk, as if announcing that the earth was now moist and fertile. It spelled hope!”

She describes the rhythmic, coiling patterns of the caracol procession, which brings her in and out of a spiritual vortex as she swipes impastos and tosses sand and twigs onto her canvas.

“The swirling whirlpool of the universe is captured in the delicate shell of the gentle, silent caracol. The energy is powerful, creative and hopefully transformative.”

Through the exhibit, she seeks “to instill hope and positive personal action amidst climate change that otherwise spells doom.”

Cajipe-Endaya’s art is cause-oriented, a very personal choice. “I hide my person in my art,” she says. “Art is my humble activism to put a sense of justice for the poor and oppressed, and an urgency to act for change.”

Thus, the themes of her paintings are Filipino identity, Filipina and nation, woman in diaspora and globalization, as well as feminism and solidarity with humankind.

These themes have evolved in her artistic development, specifically in the technical phases that she went through, although not clear-cut but overlapping, from printmaking to oil painting, collage, installation, found objects and mixed media, acrylic painting, and multimedia.

“I really liked and enjoyed each phase, because I did them all instinctively,” says Cajipe-Endaya. She highly values the woman and nation phase covering the martial law protest period because, as she says, “the rage was so powerful, it hurled me into doing very large pieces which I completed fast even with little resources and I had to recycle (materials).”

She dislikes most the period today “because all issues we fought for and dealt with in art for over 40 years continue to be the problems today.” She adds, however, that it’s her faith and spirituality that keep the fire of her consciousness and concern for social justice.

Cajipe-Endaya fights climate change this time around. With her paints, she transposes the sight of burnt, darkened, eroded, lifeless earth cracked with sinkholes caused by El Niño and contaminated by chemicals from industrial debris and mining onto her canvas by using torn katsa cloth and fallen petioles from her neem tree.

“Ironically,” she says, “El Niño’s twin opposite, La Niña, which spells rains and floods, commenced sooner than I could complete this series of paintings.” She adds, “Caracol speaks: Be gentle, be slow, be quiet. Begin, proceed, end where you started and begin again; live, die and live again.

“Like the caracol that comes out of its shell, my creative process thinly separates my inner realm and the outer world.”

The thoughtful artist is confronted by her own contemplation on aging, legacy and climate change. As she paints, she thinks of her grandchildren.

“My art flashes a ray of hope into an elegy for our abused, parched earth,” she says.

“Terrestrial and aquatic effects of climate change already batter our archipelago which will be the first to suffer in our planet’s rising sea level.” With her exhibit, she prays that we may be moved to act for a brighter future. —CONTRIBUTED