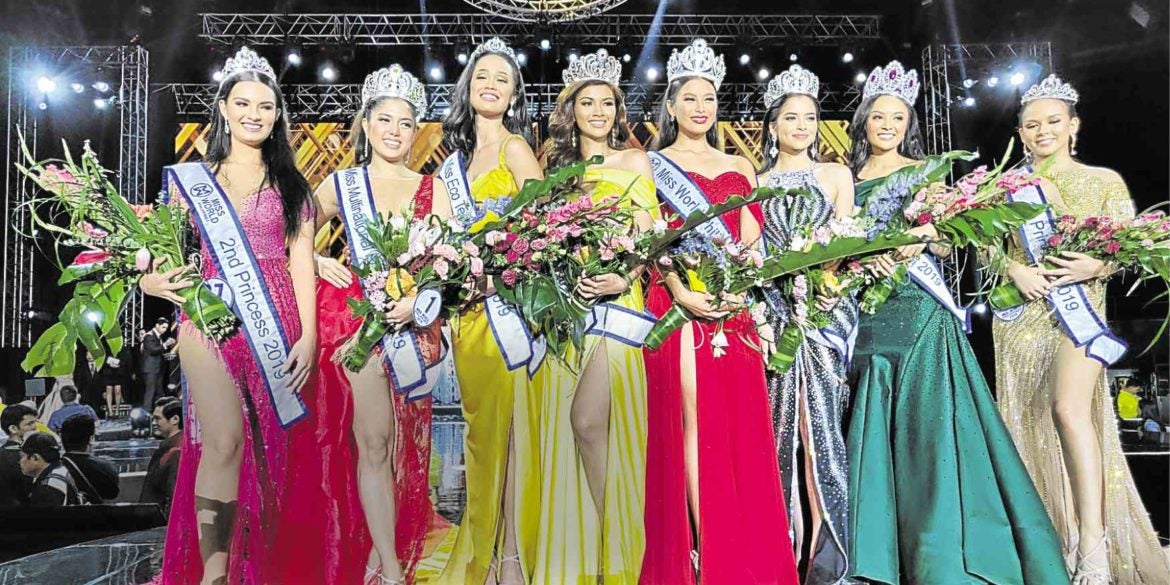 MANILA, Philippines — Bouts of insecurity, discrimination from society, and the dearth of opportunities are among the issues facing women that the country’s newest beauty queens want to address using their crowns.

“I think one of the biggest problems is the lack of women empowerment,” 2019 Miss World Philippines Michelle Dee told the Inquirer after her coronation at Smart Araneta Coliseum in Quezon City early Monday morning.

“The beauty of pageantry is that we’re not just doing this for external beauty. We’re doing this for a purpose, to make a change,” added the psychology graduate from De La Salle University, whose mother is 1979 Miss International Melanie Marquez.

Dee continued: “If pageantry was shallow, I never would be here. Pageantry is about giving back, having a purpose and doing things for that purpose.”

The 24-year-old model and TV host bested 39 other aspirants for the crown, which came with a P500,000 cash prize, a management contract worth P1 million, and a movie contract with Regal Entertainment worth P1.5 million. She now also carries the responsibility of regaining the country’s glory in the Miss World pageant, which will be held in London, England, in December.

Last year, the Philippines missed the first cut for the first time after seven consecutive years of advancing in the competition.

Five more winners were proclaimed in the national pageant.

“It continues on like a legacy, where women feel as though they are objectified and that they are ridiculed by our patriarchy. It had a lot to do with that cultural belief, our religion, our values, and how we implement that through other people’s expectations about how women should be looked at based on a certain stereotype,” the 19-year-old Harvard University student told the Inquirer.

“Pageants, I believe, could work either way by putting down a woman based on how she feels through her movement or her actions, but it could also empower the way she feels by expressing her motives, her power, her joy and her love for the world,” added Walters, who in 2014 was crowned Miss Teen Earth Philippines.

Reina Hisapanoamericana Filipinas Katrina Llegado echoed Walters’ sentiments, and said “beauty queens serve as a role model, who may be influential in helping women who are discriminated.”

But for TV host Kelley Day, who bagged the 2019 Miss Eco Philippines crown, the biggest problem is “how feminism is being turned around into something negative.”

Citing memes and other jokes she sees on Instagram, the 24-year-old GMA network artist said people who took the feminist movement as a demand for greater benefits were exaggerating.

“At the end of the day, it’s just so simple — we women have had so much discrimination for the longest time, since the history of humans. This is the time that we’re finally having a voice,” Day explained.

“There is no need for men to say we’re exaggerating because they’re not in our shoes,” she continued.

For two other queens, the biggest concern for women across the world is the feeling of insecurity.

Day’s fellow GMA artist Isabelle de Leon, who took home the 2019 Miss Multinational Philippines crown, said, “with the age of social media it is easy to feel that you are not good enough, that the grass is greener on the other side.”

The Famas award-winner continued: “At the end of the day it takes a lot of courage to actually follow your heart. Do not be afraid to stand out. Take that path less traveled, the journey is gonna be worth it.”

“Pageantry in a way is self-empowerment. We enter to empower ourselves, because we take risks and sacrifice a lot of things. It makes us feel empowered because we did all that we can for the pageant.”

Perez, who finished as “First Princess” in the pageant’s 2017 edition, also took home the “Beauty With a Purpose” award in Sunday’s festivities for her work on the Kasuso Foundation, which mounts programs for breast cancer patients and survivors.

Dee has been touted as a front-runner earlier on in the pageant. She was among the finalists in several prepageant competitions, and topped the “Sports Challenge.”

Llegado, who was best in evening gown, Miss Photogenic, and Miss Cabalen, will be the first of the six queens to leave for her international mission. She will attempt to duplicate Wynwyn Marquez’s triumph in the Reina Hispanoamericana pageant in Bolivia in October.

She will be followed by best in swimsuit and “Beach Beauty” winner Walters, who will compete in the inaugural Miss Eco Teen International pageant in Egypt in November.

De Leon, on the other hand, will compete in the Miss Multinational pageant in India in December and try to secure the Philippines’ second victory after Sophia Senoron bagged the title in the said tilt’s maiden edition in 2017.