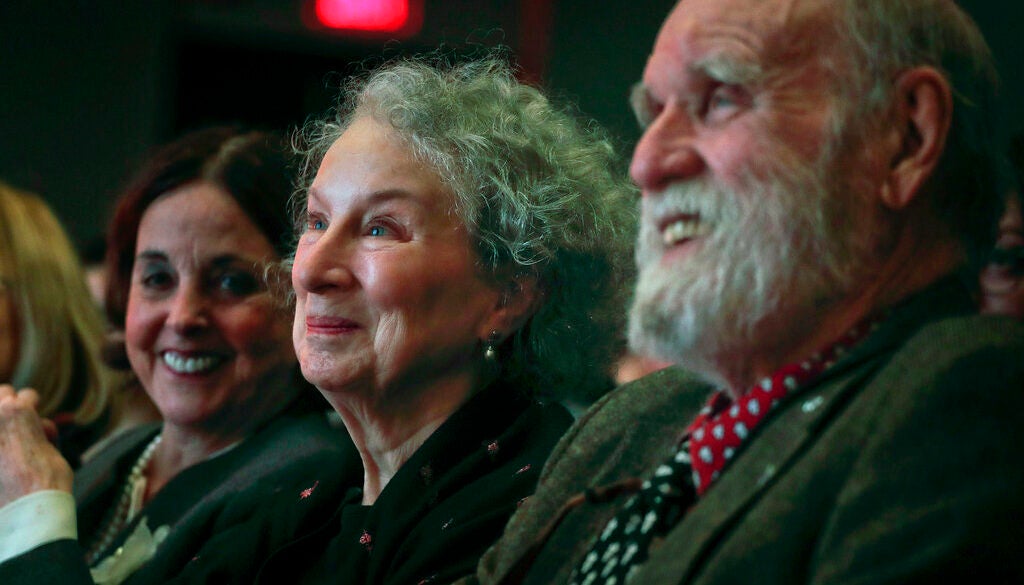 FILE - In this March 16, 2017 file photo, author Margaret Atwood, center, appears with her editor Nan Talese, left, and husband Graeme Gibson as she is introduced for the Ivan Sandrof Lifetime Achievement Award at the National Book Critics Circle awards ceremony in New York. Gibson, a Canadian novelist and conservationist has died. His death was announced Wednesday, Sept. 18, 2019 by Doubleday, which has published both Gibson and Atwood. He was 85 and had been suffering from dementia. (AP Photo/Julie Jacobson, File)

Gibson’s death was announced Wednesday by Doubleday, which has published both Gibson and Atwood. He had been suffering from dementia.

“We are devastated by the loss of Graeme, our beloved father, grandfather, and spouse, but we are happy that he achieved the kind of swift exit he wanted and avoided the decline into further dementia that he feared,” Atwood said. “He had a lovely last few weeks, and he went out on a high, surrounded by love, friendship and appreciation. We are grateful for his wise, ethical, and committed life.”

His death comes a week after the release of Atwood’s “The Testaments”, her highly anticipated sequel to “The Handmaid’s Tale”. He died in London, where Atwood had been promoting her new novel.

Gibson began seeing Atwood in the 1970s and for decades lived with her in Toronto. Their mutual devotion and his support of her career led one journalist to state “Every woman writer should be married to Graeme Gibson,” an expression Atwood used for a T-shirt.

“He thought it was funny,” Atwood told The Telegraph in 2013. “He’s pretty good — he mostly just keeps out of the way. And I don’t show him my books before they’re in print. I recommend it. Supposing your spouse doesn’t like your work — then you’re in trouble.”

Known early in his career for his modernist writing style, he published novels such as “Five Legs” and “Perpetual Motion,” and he was active with numerous organizations, whether as president of PEN Canada or serving on the council of the World Wildlife Fund Canada. His well-regarded nonfiction book “Eleven Canadian Novelists” included interviews with Atwood and Nobel laureate Alice Munro.

He had two sons with Shirley Gibson, whom he divorced in the early 1970s, and a daughter with Atwood. NVG