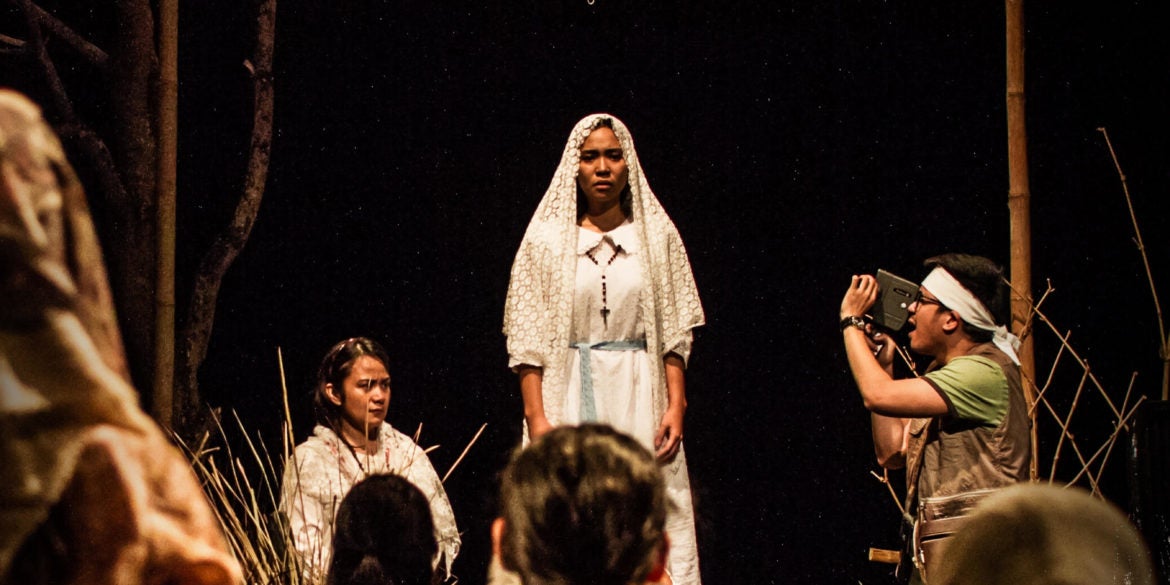 The immersive quality of “Himala” feeds the tension straight into your veins.

‘Himala’ IS the miracle

Thirty seven years after the release of the acclaimed film by Ishmael Bernal, 16 years after the musical adaptation was first mounted, “Himala: Isang Musikal” is back on the stage, a return engagement for The Sandbox Collective/9 Works Theatrical’s much-lauded sold-out run from last year that won eight Philstage Gawad Buhay awards. Returning are some key cast members and director/set designer Ed Lacson Jr. Music is by Vincent A. DeJesus and book by Ricky Lee based on his screenplay, the two both credited with the lyrics.

If you’re unfamiliar with the story that was inspired by true events, Elsa, who lives in Barrio Cupang, one day claims to have been visited by the Virgin Mary. At first disbelieving, when she appears to “heal” someone the entire town gets in a tizzy, and gets swept up in a dizzying array of gossip, commerce, skepticism and faith.

It’s a marvel of a production; the size of the venue and the set design by Lacson puts the audience right in the center of Barrio Cupang, so much so that performers don’t even need to be individually mic’d, and it’s a hell of a thing to watch a musical, a great one at that, with only the cast’s naked, unadulterated voice hitting your ears. When the entire cast joins together in thunderous chorus, some of them right beside you, it can be downright spine-tingling. The immersive quality feeds the tension straight into your veins; depending where you’re seated you might hear different side conversations about Elsa and the townsfolk. Voices overlap like an Altman film and you go by context clues. There’s an immaculate (pun not intended) choreography to the occasional cacophony and whirlwind of activity that descends on the stage.

Lee’s story remains vital; his pointed commentary on blind faith, refusing to give up the opiate, the hypocrisy of authority, the commodification of belief, the temptations of power, religious persecution (not the kind you’re thinking of), feeding on people’s gullibility and determination to be in denial remain as potent and poignant as ever.

All the performers are remarkable; you really can’t go wrong with whichever cast you see. Much as I’d like to call out Kakki Teodoro, Neomi Gonzales, Sandino Martin and the two Elsas (Aicelle Santos and alternate Celine Fabie), I’m liable to just list the entire cast roster down.

This iteration of “Himala” does not seek to supplant or replace the film; rather, it stands apart, a sister incarnation. It is its own living, breathing thing, utilizing its medium in clever, powerful ways, breathing new life into a classic tale.