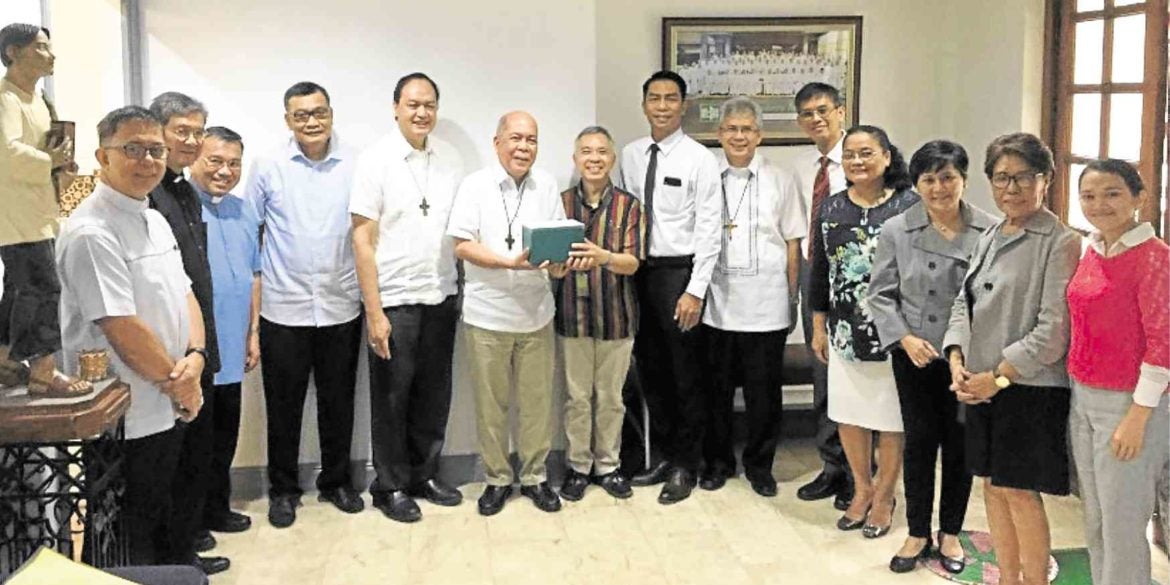 Shining ecumenical moment: Church of Jesus Christ and Latter-day Saints turns over ‘massive’ electronic Catholic records to bishops. Sadly, Leyte records may have been lost due to ‘Yolanda’ in 2013 after Palo archdiocese refused to cooperate

In a low-key but historic event, the Church of Jesus Christ of Latter-day Saints through its FamilySearch arm, recently turned over digitized Philippine Catholic Church records spanning four centuries to the Catholic Bishops Conference of the Philippines (CBCP).

The digitized documents from 1614 to 2014 were personally received by Davao Archbishop Romulo Valles and Caloocan Bishop Virgilio David, president and vice president of the episcopal conference, respectively, at the CBCP office in Intramuros, Manila.

Handing the documents which included birth, marriage and death certificates, as well as canonical decrees, and inventory of church objects were FamilySearch (formerly called the Genealogical Society of Utah) officials led by the area manager for the Philippines, Felvir Ordinario.

Ordinario said the files, composed of 14 million images, were collected from different dioceses and parishes in the country—the oldest from Binmaley, Pangasinan, dating back to 1614, and the most recent from Biliran province, in 2014.

Ordinario said nearly all of the Philippine Catholic church’s dioceses cooperated in the “massive” preservation effort of FamilySearch.

He added that archival preservation was being carried out by FamilySearch because of the belief of the Mormons that family unions extend beyond the present.

“Our ecclesiastical reason for this is our belief in the family,” said Ordinario. “We believe that unions extend beyond the present— (they extend to the) past, future. We believe in the importance of the family, so we believe that we need to know as much about our ancestor. We need to preserve the information for the future because family is essential to God’s plan. We need to learn the values of our predecessors and pass these on to the next generations.”

But there are still “a few locations in the Philippines” that have not been covered yet by this digital preservation effort, said Ordinario. He urged collaboration between dioceses and FamilySearch so that the records could be conserved.

In the case of the Philippines, he said conservation is urgent because records are always at risk due to the punishing tropical climate, as well as natural disasters like “Yolanda.”

With digital preservation, Ordinario said, “we can assure that the memories of these people are all preserved in the collection.”

Ordinario said the Intramuros event was “very historic” since “for the first time all Catholic records in the Philippines are now in one place.”

“(From) the point of view of safeguarding (important church records), this is of great help to us.”

He said that with digitization, people would have easy access to Church records.

Valles said that the CBCP would hand over the documents to the University of Santo Tomas (UST) Archives, which has modern facilities to keep and conserve them.

UST archivist Regalado Trota Jose, who was also present during the Intramuros event, thanked the bishops for reposing their trust on the Pontifical University.

Jose said UST was chosen since it had the proper place, correct system and qualified people to handle the documents, and because FamilySearch had already established relationship with UST through the turnover of microfilm records to UST prefect of libraries Fr. Angel Aparicio in the 1990s.

Jose said the documents would be of great help especially to academics and scholars researching on historical documents.

Jose stressed the importance of digitizing archival documents of the Catholic Church. “Non-Catholics are more concerned with the records rather than the Catholics themselves,” he quipped.—CONTRIBUTED