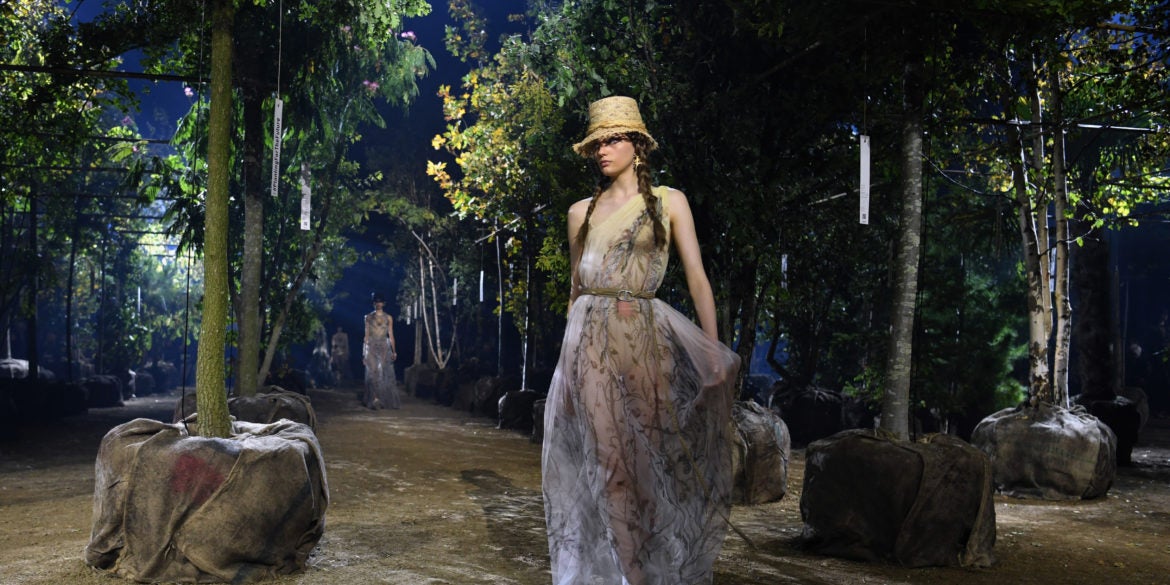 A model presents a creation by Maison Dior during the Women's Spring-Summer 2020 Ready-to-Wear collection fashion show at the Hippodrome de Longchamps in Paris, on September 24, 2019. (Photo by CHRISTOPHE ARCHAMBAULT / AFP)

Dior says it with wildflowers and Greta Thunberg plaits

Dior went back to nature in its Paris fashion week show Tuesday with Greta Thunberg plaits and a garden-inspired collection that seemed to spring straight from the earth.

With climate change biting at the heels of the fashion industry, and the London shows hit by environmental protests, designer Maria Grazia Chiuri said she wanted to create clothes that “were not just about image but action”.

To do that, she embraced the wild, with hemp gardening jackets and a series of stunning diaphanous dresses embroidered with wildflowers.

These were not the dainty pink roses of Dior yore but sinuous survivors, thistles and other prickly customers flowering on stoney ground.

Most of her models also wore their hair in plaits not dissimilar to those of the teenage Swedish environmental activist Thunberg.

Three of the most striking looks bore the ghostly prints of real wildflowers, gathered and applied by an artist who has mastered the natural technique.

The Italian designer also pushed the couture boundaries by using hemp and raffia in eye-catchingly unusual ways, with a layered raffia ballgown and flower-embroidered raffia waistcoats.

All was set in what Chiuri called an “inclusive garden” of 160 trees, their roots wrapped in hemp, which will all be replanted in urban gardens being designed around the French capital by environmental architects, Coloco.

Chiuri told AFP that her inspiration had come from Christian Dior’s sister Catherine, a French Resistance hero who became the first female flower wholesaler in Paris — and who farmed her own roses in the Luberon in the south of France.

The couturier’s first perfume, Miss Dior, was named after her, and Chiuri felt her legacy had been a little forgotten.

When she was arrested, she refused to betray her comrades despite being tortured by the Gestapo and sent to a concentration camp.

Chiuri said she was struck by a phrase of Christian Dior’s after the war, “Fortunately there are the flowers” — which she took as a sign of hope after the dark days of World War II.

“Flowers and humans need to live together if humanity is to survive,” she told AFP.

“The important issue for everybody, not just in fashion, is to be more responsible about what we do,” she said.

“It is not just about image but action… the important issue for everybody, not just fashion, is to be more responsible about what we do,” she added.

Fashion being fashion, however, the biggest headlines at the show may be Italian actress Monica Bellucci’s new short haircut, or the appearance of Hollywood star Kristen Stewart on the front row with French singer Chris (former Christine and the Queens) and the Italian super-influencer Chiara Ferragni.

Saint Laurent’s Anthony Vaccarello went into his Paris show — which featured British model Naomi Campbell — complaining about the “witch-hunt atmosphere” of our times.

The Belgian-born designer has come in for heavy criticism from feminists for his “sexist and demeaning” advertising campaigns — posters for one of which regulators forced him to pull — although the label’s sales have risen by a quarter.

“It has become impossible to have an opinion that goes against the general view,” Vaccarello said.

“They keep tell me, ‘It’s too short, or too transparent.’ I hate this new puritanism that judges everything,” he told a French newspaper.

Vaccarello said he was against “PR quotas” about the number of people of colour that should be in a show.

“The problem with racism and misogyny is that it is in the eye of the other, and it not in mine,” he added.

This collection was a little less sexed up than usual, with his mini-skirts a tiny bit longer and one or two of his leather hotpants almost becoming culottes, one of the big style revivals of the moment.

Campbell closed the show in the glistening patent Laurent smoking.