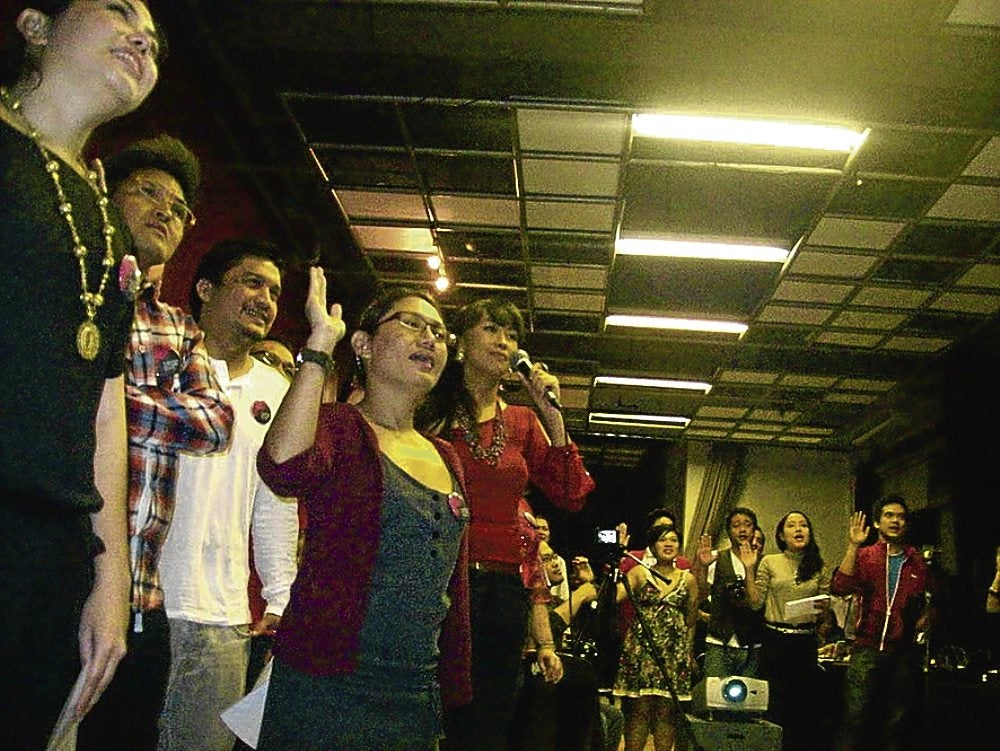 At last, a Theater Actors Guild

Haggling for talent fees but getting paid less than what was agreed upon. Negotiations conducted through text messages, with no official contract to back up the deal. Having the same talent fee for the last five years. Enduring long hours of taping in a rugged out-of-town location and provided only with monobloc chairs as bed for much-needed rest.

It’s not true that they’re fed cat food and Sky Flakes crackers, but Filipino theater actors do go through much difficulty to survive in their profession, aggravated by the second-class treatment they often get when venturing into TV and movie work and corporate events.

How to “uphold the collective good of the Filipino actor?” That’s the task the newly formed Theatre Actors Guild (TAG) Philippines has committed itself to. A nonstock, nonprofit, nonsectarian organization, the long-overdue TAG recently inducted its first set of officers at the Philippine Educational Theater Association (Peta) Theater Center in Quezon City, with the battle cry of “empowering the Filipino theater actor.”

For veteran actor Saracho, TAG is a dream come true. He remembers that in 1976, Bernardo Bernardo, Mitch Valdez, Subas Herrero, Noel Trinidad and the Avellanas (National Artists for Theater Lamberto and Daisy) had thought of getting theater actors together.

“But nothing happened, it was just an idea they floated,” Saracho said. “Until around late 1981 to 1982, when theater actors and cultural workers got together again and formed a group.” He remembered it was called the Theater Workers Guild and had the likes of Joel Lamangan, Boni Ilagan and Joonee Gamboa among the founding members.

“It was the height of the anti-Martial Law movement, and when Ninoy Aquino was assassinated in 1983, the guild was dissolved as most members shifted to a more militant direction. Many joined the Concerned Artists of the Philippines,” Saracho said.

Saracho said the formation of TAG is timely, because the guild’s agenda at this point is mainly to improve the situation from within. There are many active theater groups today and there is healthy competition among them. In the 1970s and 1980s, he recalled, there were only few theater companies and actors didn’t cross over to other productions.

“Back then, if you’re with Repertory Philippines, you just acted in Rep productions. You didn’t bond with actors from Peta or with Gantimpala or what was then called Teatro Pilipino (the CCP resident theater group) and vice-versa.”

Nowadays, as the roster of TAG officers and members show, theater actors from various local companies are working with and interacting with each other.

“An actor may do a play with Peta for this season and the following season with Tanghalang Pilipino or Repertory or with campus-based groups like Dulaang UP,” said Saracho. “Not only actors but directors, musical directors, stage designers, lighting designers, everybody. And they really bond outside the theater, they go out and drink in bars, they’re friends and sometimes, even lovers!”

Aguilos said, at present, TAG has more than 200 applications for membership, and the number is still growing. Though most members are Metro Manila-based, the group has plans of extending its coverage to the provinces and even abroad.

“Each and every one of you knew that when you decided to be theater actors in this country, this is not going to pay for your Meralco bills… You had to appear in television (and endure all the physical, emotional, psychological and even social torture and humiliation) because that pays for the bills.

“You are into 9-5 jobs…so that you can sustain a life and come home to theater. Not only because you chose to be here: You know this is not work. This is a passion. Because you find your real sense of purpose here.”

For her part, Aguilos said: “We want to start from ourselves, within the theater industry. There are many things to resolve,” among them rules concerning out-of-town productions and the standardization of fees. “Para lang hindi i-cut yung sweldo na hindi mo alam (So you know your fees are not cut without your knowledge), for example. Now with TAG, actors can use the guild as leverage.”

Another sore point is how actors are treated by what she called “tyrannical directors.” She said there are better ways to encourage actors. “You can shape up actors with other means, not physically abuse them.”

TAG will provide its members an omnibus contract signed by its lawyers. With this, the right working conditions and talent fees can be guaranteed to theater actors.

Not a management firm

Aguilos emphasized that TAG is not a management firm but an advisory group to actors, both student and professional.

“In the end, it’s still the actor who will deal with producers or directors. It’s just to let them know that, this time, actors have legal representation from TAG.”

De Jesus added: “We’re just like older brothers and sisters who will give advice, a shoulder to lean or cry on when times get tough. More or less, it’s being part of a community of theater actors.”

The support for TAG has been encouraging. Donations and pledges of support have come in from many quarters, among them TV directors who got their start in campus theater productions. Sky Flakes, tongue in cheek, agreed to sponsor TAG events by sending boxes of crackers. (At the induction, every table had a plateful of Sky Flakes paired with “cat-food looking” pâté.)

Aguilos assured: “With TAG, now actors will be properly informed about what’s exploitative and what’s not. Here, we’ll protect each other. From theater, we’d like to proceed to other fields like television and film.”

To join, one needs to pay a modest annual membership fee. No haggling allowed. E-mail TAG at [email protected]