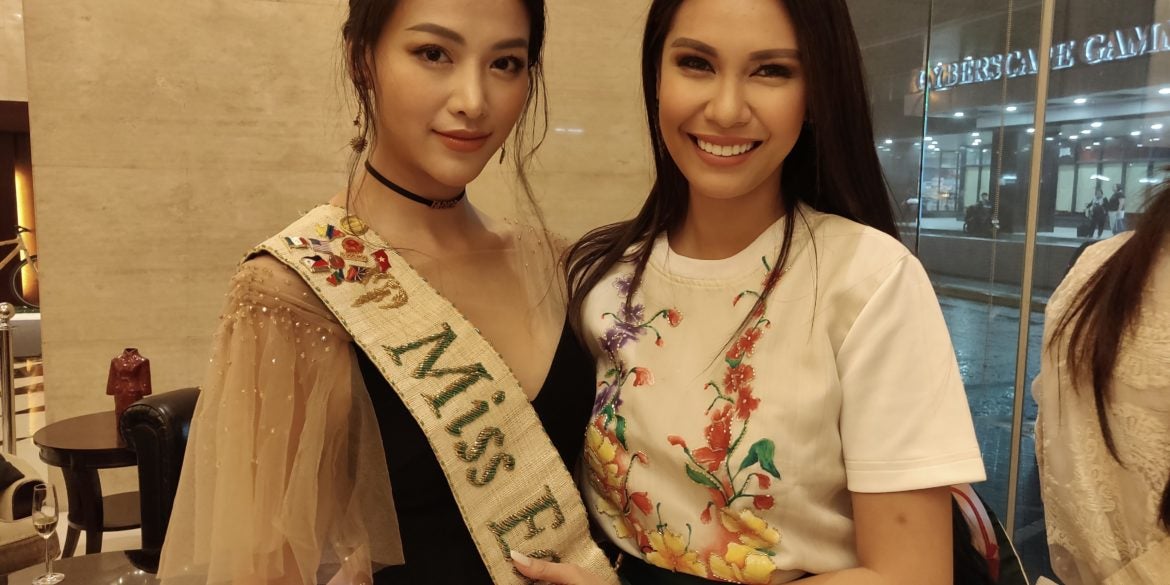 PASIG CITY—Two Filipino beauty queens expressed alarm over the results of a global study citing the Philippines as the “most murderous” country for environmentalists.

“Honestly this is the first time I’m hearing about this. I’m quite shocked, I couldn’t believe it,” 2015 Miss Earth Angelia Ong told the Inquirer at the sidelines of Joy-Nostalg Manila’s 10th anniversary celebration last month.

The hotel at the Ortigas Center in Pasig City has been a staunch supporter of the environmentally-driven Miss Earth pageant for several years now.

Ong, the third Filipino woman to bring home the Miss Earth crown, said she did not expect the results of the Global Witness 2019 report that said, “the Philippines has replaced Brazil as the most murderous country in the world for people defending their land and environment.”

The Manila-based beauty said she feels bad for the “bad news” because Filipinos are losing lives just by protecting the environment.

“It’s not even an evil thing. As Filipinos, we are known to be protective of our natural resources. This is a sad news,” Ong said.

Tee also said she hopes the perpetrators would “realize the worth of our environment.”

She continued: “We’re actually in a state of climate crisis, climate emergency, it’s not just climate change. We are suffering, experiencing the wrath of Mother Earth. I hope we will join the environmentalists because they are really risking their lives in protecting our environment because it will affect us, it will affect our lives—we  won’t have food to eat, we won’t have shelter, we won’t have everything we need if everything is dying.”

She also appealed to environmentalists to not be discouraged by the recent spate of killings.

Ong, meanwhile, said she wants to let the environmentalists know that they are not alone.

“They deserve all the love and respect. They are precious to us. When people try to put you down, it means you’re doing something right. I know it’s hard, but you are not alone. I may not be there with you, but we’re fighting the same battle,” she said.

Reigning Miss Earth Nguyen Phuong Khanh, who also attended anniversary celebration, meanwhile reminded the peoples of the world that the fire in the Amazon rainforest is still going on.

“When news of the fire broke out, I was in Colombia, near the Amazon. A lot of media and press were asking me about it,” the Vietnamese beauty shared with the Inquirer.

“Many factors that led to this problem are from human action, because of our ignorance, because we only care for the business, the economy, and not care about nature,” she explained.

Nguyen said it is imperative for the people to educate themselves and then spread their awareness to the people around them. “That’s the most important thing and the easiest thing that we can do right now.”

She also asked the people to volunteer or donate to organizations that help the people living in and around the Amazon.

“Right now there are a lot of organizations, and they’re asking people to help the Amazon. You can always research, volunteer, or donate, and share on social media,” Nguyen continued.

The 2019 Miss Earth pageant is currently taking place in the Philippines, with 85 “Earth warriors” competing for the crown.

Nguyen will relinquish her title to her successor, who will be proclaimed at the coronation ceremonies which will be staged at the Cove Manila club of Okada Manila in Parañaque City on Oct. 26. /je