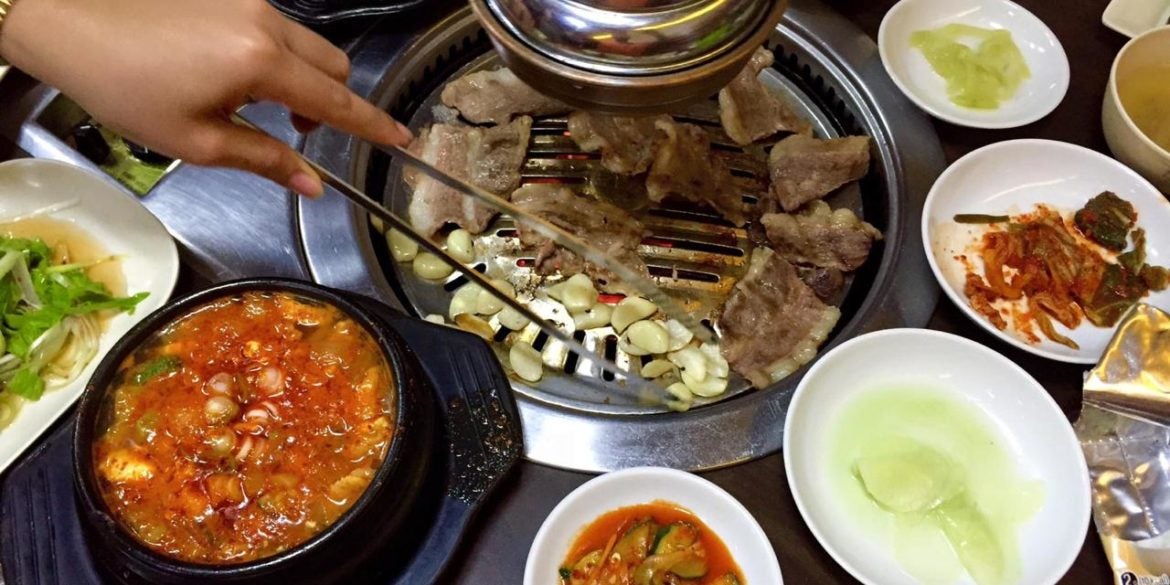 Ever since I discovered Samgyeopsal, I became an instant fan. Samgyeopsal is basically pork belly meat that is cooked on a grill and is originally from Korea. It was one of the most interesting developments in South Korean culture during the Asian Financial Crisis of 1997 that gave the pork belly the spotlight in South Korean barbeque. Pork belly is a cheaper alternative to beef and thus, South Koreans ate more at pork belly joints than beef barbeque restaurants.

The Samgyeopsal craze has hit the Philippines. Samgyeopsal joints in the country are popping up like mushrooms. For around P300 to P500, one can enjoy an unlimited pork or meat assortment that you cook through the grill on your table. There are also a lot of side dishes that waiters place on your table like sweet potatoes, kimchi, japchae, fish cakes, and even steamed egg.

Honestly, I don’t eat the side dishes and just have the waiter put them back so they don’t get thrown away. I wonder if other people do the same. This also got me thinking about how some upper to middle class Filipinos could spend so much on food and even possibly have unlimited amounts of this at their disposal, while there is an ongoing crisis in Philippine agriculture.

Around the country, we still have food wastage through plate waste. The latest 2015 survey of FNRI (Food and Nutrition Research Institute) showed that a Filipino household has an average food plate waste of 62 grams or 4 tablespoons per day. Cereals and cereal products were highest at 46 grams; fish, meat & poultry is at 8 grams; vegetables at 5 grams; and fruits at 1 gram among others.

Additionally, the 2018 Global Food Security Index (GFSI) places the country 70th among 113 countries in terms of food security. Food security is measured by the GFSI in terms of affordability, availability, and quality and safety. The GFSI placed the Philippines in the lower rankings since we lack research and development in agriculture.

Second, is the disposal of oil produced from these grills. The fat from meat goes under the charcoal grill and is collected to be “properly” disposed later. Normally, these establishments should have proper grease or oil disposal procedures. But if they just pour this down the drain or into the sewerage, it’s an environmental disaster waiting to happen. Business establishments have a problem with proper waste disposal even with guidelines and laws in place. One way to know if they dispose of their grease or oil improperly is if the sewers around the establishment smell horrible.

Looking back at the impact of eating meat amidst an agriculture and environmental crisis, I hate to say it, but I may have to apologize to the titas of IBON for making fun of them for eating organic vegetables. They have always said that eating organic vegetables is healthier and better for the environment plus it supports our local farmers. But organic food does not come cheap since farmers do not own the land they till, lack capital, and have no genuine government support. That’s why there is a need to support our farmers through agrarian reform and long-term efforts of rural development.

(Jose Lorenzo Lim is a researcher at IBON Foundation. His research topics include Build, Build, Build, the oil industry, and social services. Prior to IBON, he served as Editor-in-Chief of the UPLB Perspective for the academic year 2016-2017. When not in the office, Jose Lorenzo enjoys writing with his fountain pens and trying out new ink.)