Message from the soil | Inquirer Lifestyle 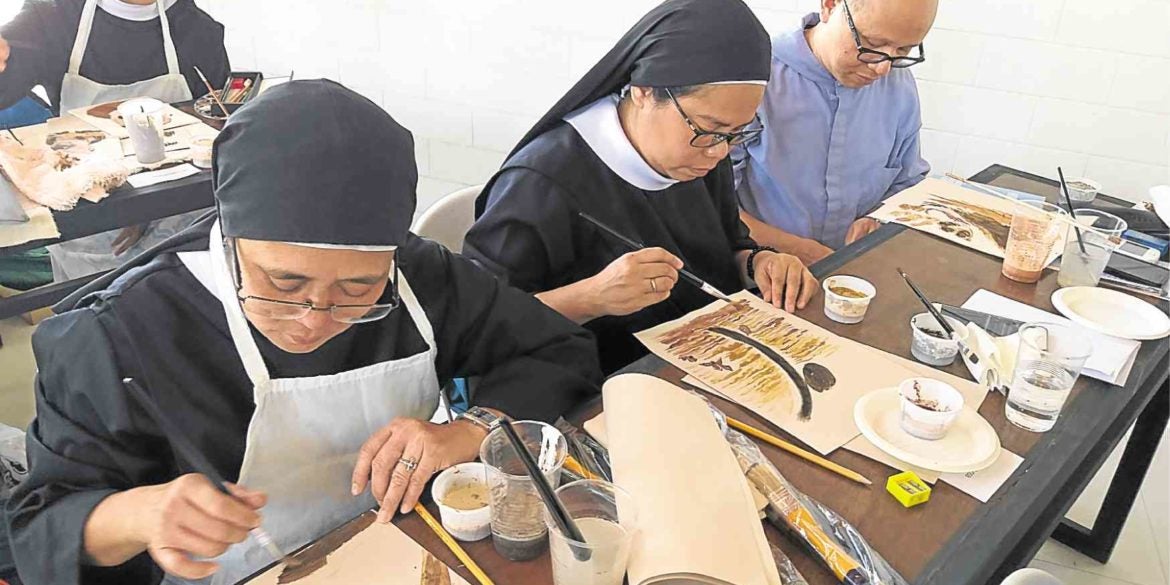 Message from the soil

One artistic innovation which flourished in European monasteries from the 6th through the 12th centuries was the manual copying of books. Monks adorned the texts with intricate original artwork like decorated initials, borders and miniature illustrations. Called illuminated manuscripts, the decorative art was supposed to help readers in their contemplation of the meaning of the texts.

The museum, which showcases liturgical vestments made from indigenous fabrics from Luzon to Mindanao, is the only one of its kind in the country. The Abbey is a Benedictine monastery in San Jose, Malaybalay City in Bukidnon.

Soil as a medium for painting was first used by American Indians and the aborigines of Australia. Since 2013, when the UN General Assembly declared Dec. 5 as World Soil Day, awareness on soil paintings grew.

The Cornell University in Ithaca, New York, through its College of Agriculture and Life Sciences, has been promoting soil painting and actively participating in soil painting competitions in the celebration of World Soil Day.

In the Philippines, soil painting is a contemporary development of visual artists of the Talaandig tribe, one of the seven tribes of indigenous people (IP) in Bukidnon.

The Talaandig are concentrated in Lantapan, a municipality in the foothills of Mt. Kitanglad, the province’s highest mountain. Being much dependent on agriculture, they feel a strong connection with soil.

Such a bond led them to use soil as a medium for painting. Their deep concern and love for nature also inspired them to make use of what is available.

The Abbey has partnered with the Talaandig tribe for decades. Its musical artists have performed for celebrations. Its visual artists also mounted a major soil painting exhibit in the MTA in March 2018, titled “Mensahe Gikan sa Bugta: Kinaiyahan, Kultura ug Kalinaw Soil Painting Exhibit” (translated from Cebuano as “Message from the Soil: Nature, Culture and Peace”).

Since promotion of the indigenous culture and arts of the province of Bukidnon is part of MTA’s mission, Dom Martin decided to come up with a workshop on soil painting.

Invitation was coursed through Facebook posts. There was free registration for limited seats, as the workshop would require enough space for participants, who were asked to bring paintbrushes, pencil, drawing paper and canvas (for the advanced). They were also asked to bring snack and lunch and a little more to share for others.

Having no formal training in soil painting, they are simply self-taught. Through the years, they have developed and mastered their own particular painting styles, quite distinct from each other.

As prolific soil painters, they have participated in group and solo art exhibits in different cities in the country.

Their artworks have likewise been exhibited in the Singapore Art Museum, the National Museum of Singapore and the Peranakan Museum, and have been included in international art festivals in San Francisco, California.

There were about 30 participants from different places in Mindanao aside from the locality itself, including Digos, Cotabato and Cagayan de Oro City, as well as Metro Manila. Most of the attendees were painting enthusiasts, ranging from the curious to the advanced.

Three of the monks of the Abbey participated. The Benedictine nuns of the nearby Monastery of the Mater Ecclesiae joined in full force as most of them have artistic inclinations.

From St. Benedict’s Monastery in Digos City, Bro. Bernard Pasacas, OSB, a monk and a painter himself, came over to join, tagging along with his friends who were painting enthusiasts.

Perhaps the most notable among all the participants was Patricia Araneta, Southeast Asia program manager of The Prince’s School of Traditional Arts in London. She was very interested in soil painting, having studied Visual Islamic and Traditional Arts abroad.

The workshop’s main resource person was Salima. She kicked off her talk with a Talaandig ritual of asking permission from the being they call Magbabaya to allow all the people present to use their respective talents for the success of the workshop.

Before the ritual, she asked for coins and arranged them on a white cloth spread on the table. She reminded us of the importance of soil for the sustenance of life of every living thing.

The resource persons themselves brought soil in different colors: black, gray, white, orange, brown and yellow. After the short talk and the demonstration of how soil is prepared for painting, the participants rolled up their sleeves and began working, as the resource persons went around giving tips and encouragement.

The abundance of snacks kept their momentum going. The Benedictine nuns brought boiled young purple corn on the cob freshly harvested from their farm which everybody enjoyed.

Datu Migketay “Victorino” Saway, chieftain and tribal administrator of the Talaandig, and his wife, Bai Lisa Saway, came to give moral support to the activity. An anthropology graduate of Silliman University, he has been very supportive of the collaborative activities between the Abbey and the Talaandig especially in the promotion of Talaandig culture.

The limited number of soil colors did not prevent the participants from coming up with interesting visuals like religious images, buildings, landscapes, leaves, flowers, people and abstracts. When the workshop ended at 3 p.m., some were able to finish their paintings, while others were still halfway.

To help sustain interest on soil painting and to continue developing it, Dom Martin proposed a reunion next year of the workshop participants for an exhibition of their soil paintings. —CONTRIBUTED