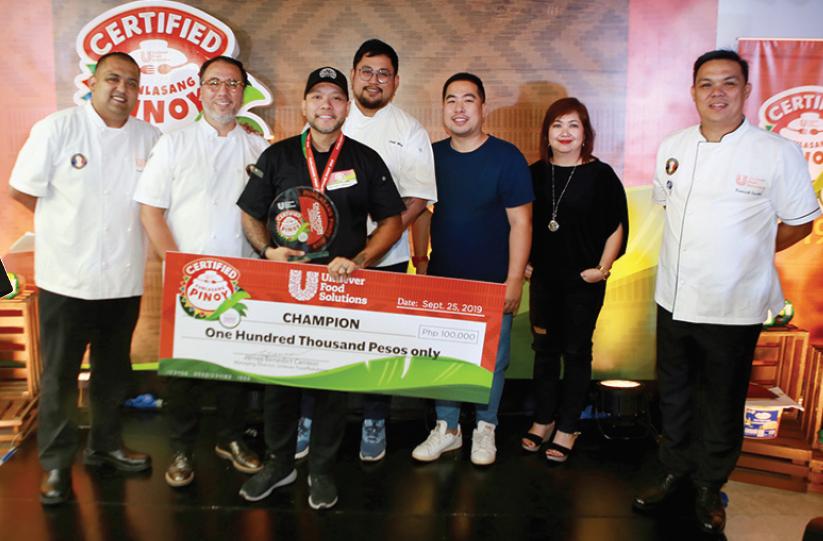 Barangan’s Burong Salmon Adlai, a creamy rendition of the traditional fermented dish, wowed the judges for its ingenious use of the gluten-free grain called adlai blended with cured salmon fillet. It was served with mustasa leaves and crispy fried lechon kawali and eaten like samgyupsal.

Runners up each received P20,000 cash and a medal. Non-winning participants each got P5,000 consolation prize.

About 22 chefs and cooks from various restaurants and hotels from Luzon, Visayas and Mindanao participated in the grand cook off.

Unilever Food Solutions (UFS) Philippines opened the search for Certified Funlasang Pinoy dishes nationwide to all restaurants, food-service outlets and food operators who have classic Filipino or Filipino-inspired dishes available in their menu and use UFS products, such Knorr and Lady’s Choice products, in the recipe.

Those who qualified were included in the diner voting site at Inquirer.net/FunlasangPinoy. The top dishes with the most number of votes qualified for the Grand Cook Off.

“This is our third year of Funlasang Pinoy and it has always been a wonderful journey trying to elevate and create a platform for chefs and cooks who take pride in their dishes particularly Filipino food,” said James Benedict Carreon, UFS Philippines managing director.

He added: “The secret ingredient to Filipino cuisine is more than what you put in sisig, sinigang, kare-kare etc. It’s the people behind those delicious food. We are here to celebrate your creativity, the way you, our beloved chefs, prepare and cook awesome, straight-from-the-heart Filipino dishes. We want to champion your passion and nationalism to be globally competitive.”

Finalists were divided into three batches and provided their own workstations.  They were given 30 minutes to work on their prepared dishes, including re-heating, assembly and plating of three identical plates for photography and judging.

Criteria for judging included Taste (40 points), an overall impression of the dish that exudes harmonious mix of flavor, taste and texture along with proper application of cooking techniques; Correct Preparation (10 points), proper preparation and application of UFS products into the dish; Presentation (20 points), plating, appearance and ideal serving portion; Alignment of Dish to Funlasang Pinoy Concept (20 points), classic Filipino or Filipino-inspired dishes; and Use of UFS products (10 points), must be integral to taste and texture of the dish.

All entries were judged by a panel of judges led by Fernando Aracama, chef and owner of Aracama Filipino Cuisine. Other jurors were Kel Zaguirre, chef and owner of Locavore; Pipo Aluning, UFS senior sous chef; Mark Tan, Eatsplorations content creator and influencer, and this author.

All judges were impressed by the emerging culinary talents. All entries highlighted Filipinos’ unique skill in creating classic Pinoy dishes that were given a modern twist or fused with other foreign cuisines. Some showcased their family heirloom recipes, while others presented indigenous dishes from their respective region.

“This kind of competition by UFS gives chefs or cooks from the provinces the opportunity to experience competition in this dynamic level and be mentored by fellow chefs,” said Aracama. “This is really hard to come by. Not a lot of competitions were available out there and sometimes you only get to qualify if you come from a hotel.”

Aracama added: “Now, we are getting carinderias or hole-in-the-wall eating places. You see, UFS has also given me and my fellow chefs a chance to see what’s happening on the street level of our cuisine. We are all very busy running our own businesses that sometimes we become a little jaded. But when you see the participants in Funlasang Pinoy, they come here very humbly preparing something like the Beef Serkele which blows you away because it’s something you thought you’ve already tried but you haven’t.”

Aluning said there was a  balance between the classic and the innovative dishes presented by the participants. For him, this balance sparked interest and made the judges react both to the simplicity and outrageous take given to popular dishes such as sisig and kare-kare.

“There were many variations and assorted interpretations to favorite Filipino dishes and we were really happy about it,” Aluning said.

Zaguirre said he was equally impressed how Pinoy cooks these days are more proud of their cuisine in general.

“Before you cannot see any effort to innovate Filipino food because it’s always Italian, French etc.,” said Zaguirre. “Now, the spotlight in Pinoy dishes is very encouraging. In that aspect alone, this kind of competition by UFS is already a big win for me.”

Barangan’s Burong Salmon Adlai garnered the highest points because of its unique use of adlai and the perfect balance of sour-salty flavor made more subtle by the addition of salmon.

“I was playing with adlai as requested by my sister who grows it in Mindanao,” said Barangan of Eastwood Richmonde Hotel. “I love buro and I want people to enjoy it like I do. I chose salmon to make it more premium.”

Barangan explained that the effect of salt curing the salmon with Knorr Rostip gave it the saltiness the fermentation process needed. The adlai turned out creamy and rich because of the fat in the salmon. The acidity came from the fermentation and addition of Knorr Sinigang Mix.

“Buro is not really a popular dish,” said Aracama. “It is very regional in effect. I have tried buro before and it took me a while to like it. But this one, it’s more refined and well-thought of. It’s very updated. It’s something that you can enjoy eating every day.”

“Bangus has always been our restaurant specialty,” Austria said. “Our constant innovation in the kitchen led us to offer Sizzling Bonuan Bangus Sisig. Both our local and foreign guests enjoy it. Filipinos love pork sisig so we simply replaced pork with fish.”

The idea was a hit, especially to the UFS competition judges.

“I gave it a little twist by adding kimchi juice into the marinade and seasoned it with Knorr Sinigang Mix and Knorr Chicken Powder,” Evangelista said.

Zaguirre found it interesting and unique.

“It was executed nicely,” said Zaguirre. “It’s also relevant since Korean food is very much in. It’s not really hard to comprehend that kimchi and inasal are perfect combination. It’s accepted and updated in a way that you don’t feel weird about the innovation.”

Adriano’s Beef Serkele is an heirloom recipe from a family in Baliwag, Bulacan.

“It’s a recipe of my boss Normita Alejo,” said Adriano. “I’ve been working for their restaurant for 16 years now. She taught me the secrets of cooking serkele which is another version of dinuguan but instead of pork innards, we use beef innards.”

Zaguirre also found the dish extra unique and tasteful. It takes certain skill, he said, to clean, prepare and use beef innards in a dish.

“To execute a simple dish like dinuguan is the most difficult to do,” said Zaguirre. “The level of skill is different. At this level of competition, you cannot expect a bowl of dinuguan and puto to be blown away. That’s the curve ball in this competition. No matter how simple the dish is but the confidence is there, it makes a big difference.”

“I wanted to take a familiar dish like Ginataan Alimasag to the next level,” said Casallo. “I want to make it more convenient to eat but maintain familiar ingredients like the kalabasa which I pureed and the sitaw stir-fried with the Ilokano trinity of garlic, shallots, and ginger.”

The result impressed the judges.

“The taste was fresh and clean and it highlighted the sweetness of the alimasag,” said Tan. “The use of local ingredients is very important in giving Filipino food its justice. It’s very relatable and modern by serving it as alimasag crab cake. And, that made the big difference.”

All winning dishes are available at the awarded chef’s respective restaurants. They are as follows: