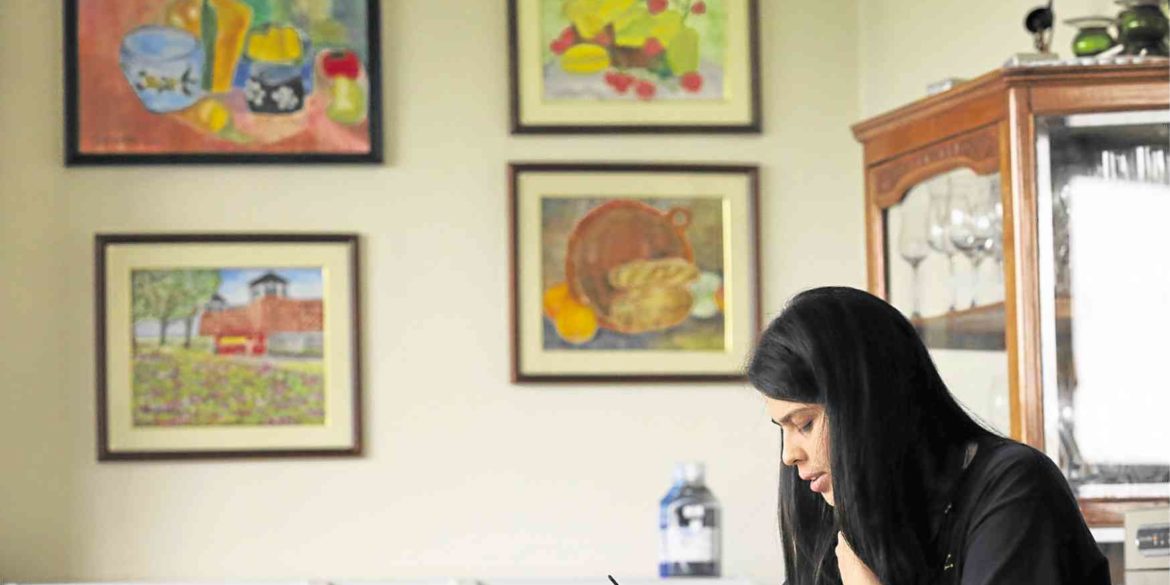 MANILA, Philippines — Hunched over a stretch of delicate “piña-seda,” Samantha Kaspar carefully moves her tiny brush over the silk, painting greens and browns while humming “Somewhere Over the Rainbow.”

Lining the walls of the Kaspar home are the numerous creations of the young Swiss-Filipino artist, who uses watercolor on paper, acrylic on cloth and silk paint on pineapple silk. Her works show a wide range of her interests through the years: from a cartoon-like depiction of a mother and child, to intricate landscapes and visuals of plants and animals.

For the 22-year-old Kaspar, who was diagnosed with severe autism, art has been her way to reach out to the world.

In a society where verbal language appears to eclipse all other means of expression, Kaspar, who is semiverbal, takes firm hold of her paintbrush and tells her stories through her own distinctive lens.

Drawing inspiration from nature, she recently began portraying the country’s rich biodiversity through her unique vision.

On Thursday, 40 of Kaspar’s paintings will be on display in a benefit exhibit in Enderun Colleges in Taguig City, in partnership with the Asean Centre for Biodiversity (ACB) and the Center for Possibilities Foundation.

Her works, which will showcase the endemic and endangered fauna and flora of the Philippines, will celebrate the union between biodiversity and art, while raising awareness on autism and people with special needs.

Early on, Kaspar’s parents Martin and Michelle knew that there was “something different” about their eldest child. She did not speak a lot. She was not very sociable. In the Philippines, in the late ’90s, no one could tell them what exactly was happening to their daughter.

When she was nearly 3 years old, doctors in Switzerland finally identified that she had autism—a dreaded diagnosis for the couple.

But while Kaspar shied away from normal conversations and social situations, she found her voice by communicating through pictures. She strung thoughts together through images. She also found comfort in creating her own art, even as a young child.

“Our apartment then had so much paper lying around and she would draw with these colorful markers,” Michelle said. “She would copy a character she sees on television and incorporate it with another character from another show, then create stories about them.” 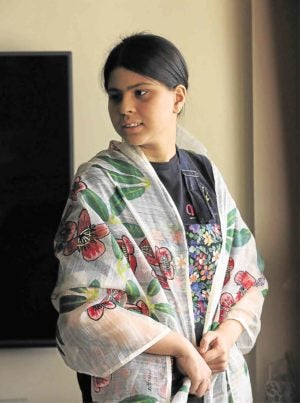 To this day, Michelle keeps her daughter’s early works: a voluminous stack of artwork on paper that showed her love for colorful and lively characters, rich with facial expressions that conveyed her very own emotions.

After living in Switzerland and Australia for over a decade, Kaspar’s family returned to the Philippines, where she attended school.

“Until one day, she folded all her school uniforms, handed them to me and said, ‘No more school,’” Michelle said. Seeing her varied interests, however, Kaspar’s parents decided to encourage the activities that made their child happy: singing, playing the violin, ice skating, and, of course, painting.

Kenneth Sioson, who has been Kaspar’s art coach since 2015, said she had an affinity for repetition, patterns and fixed forms, which was evident in many of her works.

“It is important that we don’t see them as merely people with disabilities, but as differently abled,” Sioson said. “Their way of communicating may be different, but it’s just as effective.”

In 2017, Kaspar was among the artists with autism invited to show their works in the Fashion and Arts Autism Benefit in New York City. Her work on pineapple cloth, which was inspired by Filipino modernist Anita Magsaysay-Ho, was translated into a dress worn during the show.

That same year, she won second place in the visual arts category in the Naturally Autistic People Awards in the ANCA World Autism Festival in Vancouver, Canada.

A “baro” featuring some of the country’s endemic species as painted by Kaspar was worn by ACB executive director Theresa Mundita Lim in President Duterte’s State of the Nation Address in 2018. The delicate piece included illustrations of the Philippine eagle, red-vented cockatoo, turquoise jade vine and “waling-waling.”

“Samantha’s work tells us the value of nature in art and well-being,” Lim said. “It shows that biodiversity can inspire artists … We hope the exhibit will allow us to reach out and create more champions for biodiversity.”

This week’s exhibit will also unveil Kaspar’s painting of Medinilla theresae, a newly discovered plant species that only grows in Mindanao.

This rare plant was named after Lim, who also served as the director of the Biodiversity Management Bureau of the Department of Environment and Natural Resources.

Lim said the exhibit will also honor the late Perry Ong, a biologist and conservationist who was among those who discovered the new species.

While it remained uncertain what the future may bring for Kaspar, her father Martin said her story is a reminder that people with special needs have a voice, too.

“[Through her paintings,] she invites people to her world,” he said. “She lets them in.”