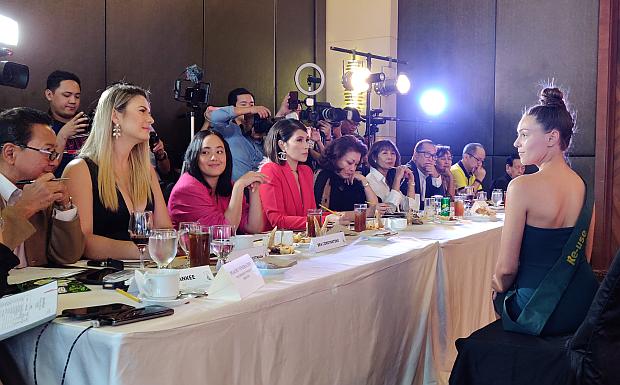 TAGUIG CITY, Metro Manila, Philippines — Makeup is one of the most important “tools” in a beauty queen’s arsenal when she takes to the beauty pageant stage, but the 2019 Miss Earth beauties went bare-faced for a crucial segment of the global tilt.

The 85 aspirants of the global tilt appeared without makeup in public for the judging for the “beauty of face” and “poise” categories held at the F1 Hotel at the Bonifacio Global City in Taguig City on Sunday, Oct. 13.

The joint judging sessions were made available to followers around the world via Facebook live. This is the third consecutive year that pageant organizer Carousel Productions has made the once closed-door judging open to the public.

Since the pageant’s inception in 2001, Carousel has been requiring the delegates to appear without makeup for the “beauty of face” category. In 2017, the organizers decided to offer an “inside look at the making of a Miss Earth titleholder” through Facebook live.

Aside from the “beauty of face” and “poise” categories, the “figure and form” and “intelligence and environmental awareness” have also been judged with a Facebook live audience watching real-time.

“It’s open to everybody. So whoever has seen the judging on Facebook will see for themselves why the candidate won,” Carousel Productions Vice President and Project Director Peachy Veneracion told the Inquirer on the sidelines of Sunday afternoon’s judging.

Experts on the specific categories comprise the judging panels.

According to Veneracion, it’s important to have the ladies’ faces bare so “you can see the natural beauty of the girl.”

She added: “It reflects your outlook in life. Sometimes when a person’s heart is in the right place, it will radiate a certain aura. One doesn’t need to put makeup on and the beauty will shine through.”

This move by the Miss Earth pageant has received both favorable and unfavorable feedback from netizens watching via Facebook live.

“But this is what we want, we’re advocating about nature, and we’re going natural. And there are still a lot of people who are happy seeing the girls without makeup,” Veneracion shared.

With the judging for the “form and figure,” “beauty of face,” and “poise” already finished, the next crucial stage for the delegates is the judging for “intelligence and environmental awareness” which will take place at the Diamond Hotel in Manila on Oct. 19, which will be made available on Facebook live starting at 10 a.m. (Manila time).

The 2019 Miss Earth pageant will hold its coronation ceremonies at the Cove Manila club at Okada Manila in Parañaque City on Oct. 26.

Nguyen Phuong Khanh, the first Vietnamese woman to win in a prestigious international beauty pageant, will crown her successor.