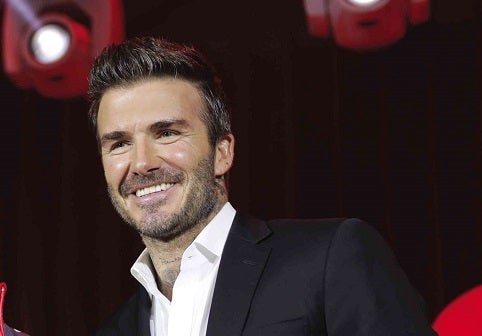 David Beckham in Manila: “I always try to be authentic.” —PHOTOS BY ERIC S. CARUNCHO

The icon still rocks, but stands for a lot more now, and explains to Filipinos why he’s batting for a healthier, better, longer lifestyle

You could do a lot worse than David Beckham for a life coach.

The global football superstar is, I would argue, the last rock star standing from the Cool Britannia era of the 1990s. Music idols Noel and Liam Gallagher, Damon Albarn and Jarvis Cocker are either gone or gone to seed, but Beckham just keeps getting better with age.

His days on the pitch with Manchester United, Real Madrid, Paris Saint-Germain and the English national team are the stuff of football legend. As president of Major League Soccer team Inter Miami CF and global ambassador for football, he’s managed to stay with the sport that he clearly loves after his retirement as a professional player.

Even if you’re not a football fan, Beckham’s understated cool has made him a male style icon that we haven’t seen since the days of McQueen (Steve, obviously, not Alexander).

He still rocks the tattoos that cover most of his arms and upper body, but he’s abandoned the more outre hairstyles and Euro-cheesy fashion choices for a more classic look.

Whether in jeans, T-shirt and boots astride one of his Harleys, or in sleek designer gear for one of his innumerable public appearances, he manages to look effortlessly put-together.

More importantly, his wholehearted embrace of family life since his 1999 marriage to Victoria Beckham (formerly Posh Spice of the Spice Girls and a global celebrity in her own right) has made him the perfect role model for nontoxic masculinity. Being Dad to his four children is obviously a role he’s grown into, and the one that most defines who he is today.

Which is why it makes perfect sense that AIA Philam Life has chosen him as international spokesman for its “Healthier, Better, Longer Lives” initiative.

The life insurance company has retooled its brand to focus on promoting a healthy lifestyle, specially in its Asia operations.

“As Asia has become wealthier, it has become unhealthier,” says AIA group chief marketing officer Stuart Spencer. “We’re concerned about the upsurge in lifestyle-related diseases across the region. We’ve concentrated on transforming our business. How do we enable better, longer, healthier lives?”

Enter Beckham as AIA’s role model and advocate for a healthier lifestyle.

“It’s been an amazing experience from Day One because I’m involved in a company that is doing so much for so many people, literally changing people’s lives,” says Beckham about his partnership with AIA Philam Life at the “Live Better” expo held in Taguig on Oct. 13. (It’s Beckham’s third visit to Metro Manila.)

“That’s also one of the reasons why I’m an ambassador for Unicef. When I go to different territories and see the changes that we’re making as a company to people’s lives, that’s the most important thing.

“I don’t want to sit in front of people and preach to them,” he adds. “I don’t want to say, ‘this is the right thing, this is what you should do’ because everybody is different. Everybody leads different lives. It’s about educating people, and trying to teach them in the right way, so they can adapt to it in their own way.”

In a subsequent interview with members of the media, Beckham held forth on a number of subjects close to his heart.

On his reasons for keeping fit:

“I think we all have our own whys, but mine is my children, my wife, my parents, Victoria’s parents, my sisters, what I really care about. I want to be fit, I want to be healthy, I want to live the right lifestyle so I can continue to be a great husband, a great father—that’s my why.”

On the longevity of his career:

“I think because I have young children, because I’m young in my mind, I try to change things up. I try to be authentic as well and I think authenticity is a big part of why I’ve lasted this long and why the brand that I have is successful. I always try to be authentic with the sponsorships that I do, the stuff that I do in general. There always has to be a good reason for doing it and I try to keep to that.

“I’ve changed my hairstyle so many times. It’s a little bit more relaxed now… I realized that once I got past a certain age, I shouldn’t have certain hairstyles or wear certain clothes that I used to wear when I was 20 years old.”

On food and diet:

“It plays a huge part because I love food. There’s not much that I don’t like. And I also try to live a healthy lifestyle. My children love my cooking, or they say they love my cooking. I try to cook as healthy as possible for them.

“My children’s favorite food, I would say, is Italian. They love pastas, so I try to make as healthy pastas as possible.

“But life is all about balance. It’s the same with kids, because they like snacks—they like to eat chocolate or crisps. It’s all about balancing, making them understand that, actually, it’s a lot better for them or they’re going to get a lot more energy from [eating healthy] rather than eating a bar of chocolate.”

On raising his children:

“Let them do whatever they wish to do. Everybody has dreams. You have to obviously stay on top and stay in control of kids because I think that’s their way of learning. You have to teach them in the right manner and the right way.

“Children have to know that there are boundaries, I think that’s true in every walk of life. But none of my children at the moment want to be footballers, and that’s OK because you don’t want to force anybody into doing anything. That’s not what should happen.

“But if my children turn around and say, ‘Daddy, I don’t want to sing anymore, I want to play football,’ then they will have the support and everything Victoria and I can give to them.

“We’ve always supported our children in whatever they want to do, but we can guide them in a way that is very supportive. It’s important to show kids love, support and encouragement, but like I’ve said, you also need to teach them manners and the boundaries that we all want for our children.”

On his work ethic:

“My thing that I always live by is hard work. My parents were hard-working people and they luckily passed that on to me, and it’s the one thing that I hope I pass on to my children.

“It doesn’t always happen, but I hope my children have my dedication, my drive, because I think trying to pass on drive to young kids these days is difficult at times. But I hope they try to live by those morals of hard work and dedication and drive.”

On why Filipinos should get into football more:

“It’s the number one played sport in the world. But I’m also a fan of basketball. As much as I love football, I’m a fan of kids playing any sport. I think it’s such an important part: It’s team building, it gives them encouragement, it makes them feel good when they’re good at something, so whether it’s football, basketball, tennis, hockey, whatever it is, I think it’s important for a child to play some kind of sport.

On his early days:

“Living in Manchester in the ’90s was one of the best things. On the music side we had the Stone Roses, Happy Mondays, Oasis—all these great bands.

“And I was part of the ’90s when it was an amazing time to live in Manchester, and specially to have the success we had as a team was really incredible. Those days… I’ll always miss those days.”