And for dessert—cheesecake ‘adobo’ | Inquirer Lifestyle 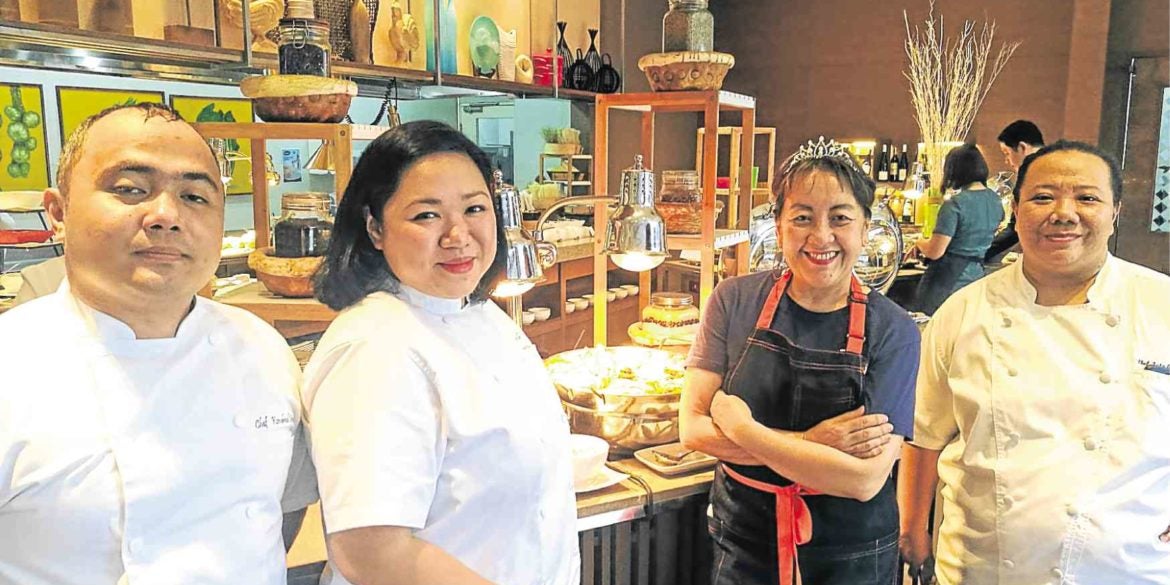 The more than 30 dishes make up “Adobo Nation,” a month-long festival at the hotel’s Flavors Restaurant that showcases the many creative ways of cooking adobo aside from the standard chicken and pork variety.

“Adobo is not really restaurant food,” says home cook, food writer and self-proclaimed adobo queen Nancy Reyes-Lumen. “It came from the household, anybody can do it, but we’re showing the different types of food that can be cooked adobo-style.”

Lumen—whose advocacy of promoting adobo as national dish has resulted in “The Adobo Book” and “The Adobo Book 2”—leads a team of chefs in charge of cooking the dishes in October at Flavors.

Holiday Inn director of public relations Bess Howe says it was the hotel’s F&B director, Ria Sycip, who thought of doing Adobo Nation. “When Ria first mentioned it, there was only one person we had in mind to do it—Nancy.”

Lumen tapped chefs Jen Seranilla and Jaja Andal, to help her do the project. “We tossed around ideas and worked together.”

Seranilla says, “We’ve been working in food festivals and consultancy. So we called ourselves Team Adobo for this project.”

The team added the young Konrad Nuñez who contributed a beef dish.

Lumen says adobo is “neither just a recipe, nor a cooking style, but actually a menu of assorted tastes centered on sour and salty, and sometimes also sweet.”

What Team Adobo religiously maintained, she notes, is “the long stewing, with vinegar to tenderize, to preserve, and from there we do the tweaking.”

For instance, Lumen points out, “mine has a crust that is smoked, with salt, sugar and secret ingredients.”

She’s referring to Rodrigo’s Roast, slow-cooked pork belly broiled with a crust, which Lumen adapted from an old recipe by Philippine cookbook author Enriqueta David-Perez who is said to have named it after her husband Rodrigo.

Andal’s dish, Pianggang Adobo with Palapa, uses burnt coconut adobo sauce on tuba-marinated chicken—which she says she learned about while traveling in Mindanao with Lumen and Seranilla.

Seranilla says that her own creation, Cheesecake Adobo, is inspired by her work in a French restaurant.

Deliberately skipping breakfast, I also took a break from my no-meat diet these past weeks to have a taste of “Adobo Nation.”

Rodrigo’s Roast was succulent, the Adobo Longganisa had a pleasant zing (“We didn’t put sodium nitrite!” says Lumen), and the Cheesecake Adobo retained the dessert’s sweet kick with just a hint of black peppercorn.

To lessen my guilt, I gobbled some ratatouille which was added to the buffet as a vegetable dish though with no adobo infusion.

“This is about elevating adobo,” says Howe. “It’s not just brown meat because there are different ways of doing it, as I found out.”

She adds that the adobo festival is apt since Holiday Inn management has noticed that the hotel’s clientele likes Filipino cuisine. “There are many balikbayan who come here with their relatives. They feel at home. Our chefs are incidentally all Filipino, too.”