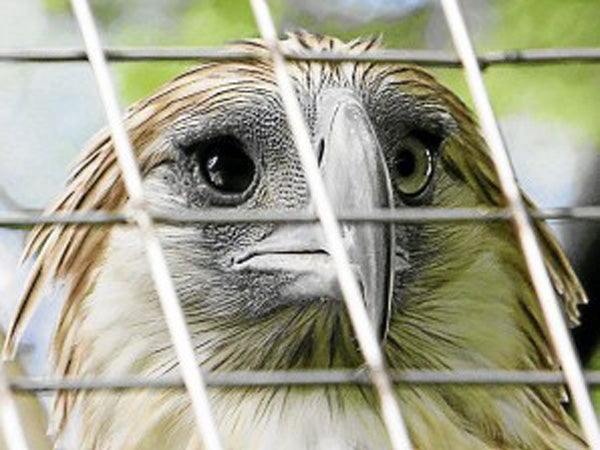 Humans can learn about love from Philippine eagle

DAVAO CITY, Philippines—The majestic Philippine eagle, the national bird, has a reputation of being a strong, aggressive and fierce animal. But when it comes to showing love and devotion to its mate and offspring, it is surprisingly gentle and caring.

In this month of love, we have a lot to learn and, perhaps, to emulate from the Philippine eagle when it comes to finding a partner, performing the duties of a husband and raising a family.

This is love, eagle style, according to the Philippine Eagle Foundation (PEF).

For Philippine eagles, there is no such thing as love at first sight.

In attempting to pair off eagles at the Philippine Eagle Center in Malagos, Baguio District, Davao City, the two eagles that are to be introduced are initially placed in separate but adjoining cages with a clear partition because it takes a while for them to get used to each other’s presence.

The courtship of Philippine eagles is a very slow process that happens during the breeding season, which starts in July and ends in February.

This is when the male starts courting the female by initiating the building of a nest. He brings leaves and twigs to her every day as a gift. This is his way of showing the female that he can well provide for a family and secure its survival.

Only after about a month will the female respond by joining in the nesting activity and help arrange the leaves and twigs. If she does not join him, the male has failed to impress her and win her interest.

For the male eagle to pursue the female further, she should acknowledge his presence and allow him to perch close to her. Otherwise, there could be aggression that could result in physical injury or, worse, the death of one of them.

The male should show consistency in his courtship so it would be appreciated and accepted by the female. Also, during the breeding season, it is always the male who hunts and brings back prey or food to the female. And he eats only after she has had her fill.

After the nest has been built, the male will make vocal sex calls or sex solicitation calls asking permission from the female to copulate. If the female ignores the calls, she is not yet available. But if she is ready, she will raise her tail to allow copulation. Sometimes, it is the female who calls first when she feels she is ready.

During the early part of the breeding season, the sex vocals are also signals to other eagles that the pair is breeding and they should all stay away. In the wild, the pair will soar over their territory as part of the mating ritual.

But it is not exclusively the female that can show signs of rejecting the male. Sometimes the male eagles are the ones that show disinterest. In some pairing attempts, a male will not initiate nesting activities, which means that he does not like the female at all. There are also instances when a male refuses to copulate even when a female shows eagerness.

If the copulation is successful, the female experiences lethargy, a condition where she appears weak and seldom eats. Then she lays an egg, with the male sharing in incubation duties for 55 to 58 days. She lays only one egg compared to other species.

Both care for young

After the egg hatches, both parents take care of the young. One parent stays in the nest while the other leaves to hunt. They continue to do this for two years until the eaglet is capable of surviving on its own and leaves the nest.

The Philippine eagle is monogamous.

When the eaglet is gone, they breed again in the next season, starting the courtship to nesting and breeding process all over again.

In case one of the couple dies, the surviving eagle will start the long and tedious process of finding a new mate and go through the whole courtship ritual.

Rarest of its kind

The PEF said this practice among eagles could be the reason their population is not growing much.

At present, the Philippine eagles in the wild number only 400 pairs or 800 birds.

“The Philippine eagle is the rarest of its kind in the world and is endemic to only four islands in the country. The noble and romantic Philippine eagle is a slow breeder, all the more reason why it needs our help to survive in the wild,” the PEF said.

Aside from its breeding practices, the eagle’s population is also threatened by hunters.

This, the PEF said, is evident in the cases of birds rescued from captivity. Many of them had sling or gunshot wounds.

“Let us do our share to prevent hunting and help our forest habitats thrive,” the PEF said.