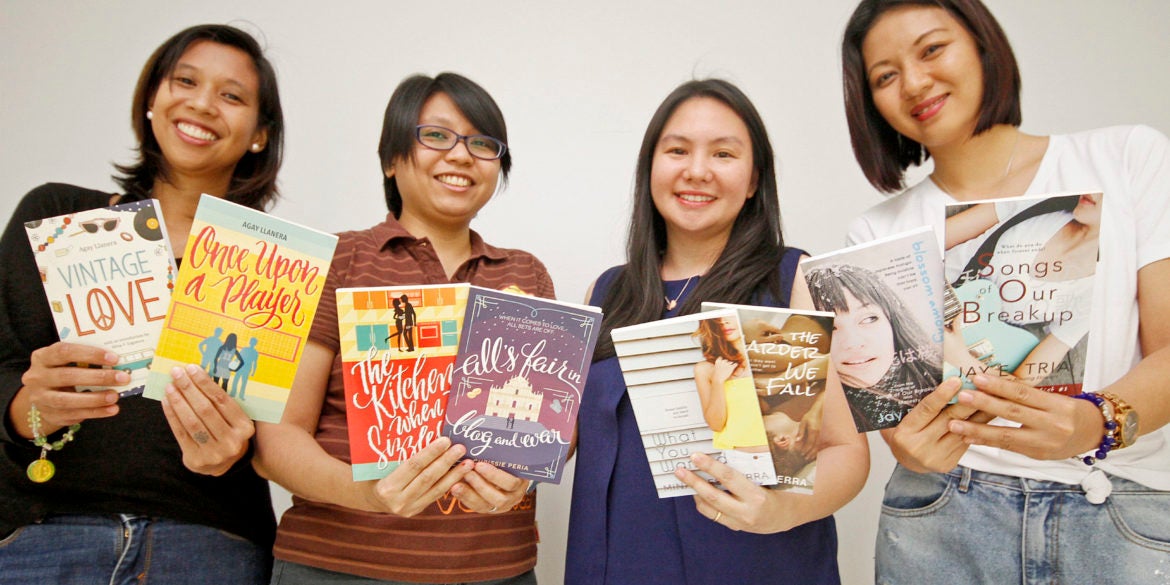 That is exactly what has happened. Since then, #romanceclass boasts a passionate, prolific and powerful membership which has published novels here and abroad, in print and e-book form, among them Brigette Bautista, Six de la Cruz, Miren B. Flores, Dawn Lanuza, Agay Llanera, Chrissie Peria, Jay E. Tria and Ines Bautista-Yao. Pushing the romance in English into new territory, the group continues to hold lectures, record podcasts and hold live readings, the highlights of their annual gatherings, April Feels Day in April and Feelsfest in October. And they write and publish—a lot.

“Our website has a list of 91 authors who’ve published something through the classes and the community, and there’s actually an ongoing class right now that ends on Nov. 30, so there could be more lovely books soon,” Esguerra said.

#romanceclass is now exploring a new form as it embarks on creating its first web series, based on Llanera’s 2018 novel “Mango Summer.” Set in San Antonio, Zambales, “Mango Summer” is about 36-year-old Fiona, whose family owns a mango farm where the precious fruits have suddenly gone mysteriously sour. She then meets 28-year-old Greg who arrives to get some mangoes.

“I enjoyed reading Laura Florand’s ‘Amour et Chocolat’ series, which was a love letter to French chocolates and romance. During a conversation with a friend, I’d wondered what Filipino food I could feature in a romance, and she suggested mangoes,” Llanera recalled. “Since my dad’s hometown is San Antonio in Zambales, which we still visit every summer, I chose it for the book’s setting. The age-gap—older woman, younger man—trope was inspired by my favorite Korean dramas with the same theme.”

Esguerra said “Mango Summer” was chosen because “it’s also a refreshingly adult romance, in terms of themes and situations, and that continues to be something we want to see more of in film and series. When we were thinking of what to start with, this was on the top of our list.”

Doing a web series was a natural progression for them. “We thought that a web series would be an appropriate format for it, because the book is indie published and available worldwide,” Esguerra said. “We’re fans of romance in other media, and taking these stories we love into that format has always been one of the plans. We just wanted to find out how we could do it in a way that was accessible to our readers in different locations, and kept as much of what we like about the books intact.”

“Mango Summer” is planned as four 20-minute episodes, targeted at romance readers and viewers in their 20s or older, in the Philippines and 15 other countries. “We did a survey of readers of books released by our romance community and found that our readers are in 16 countries so far, that we know of. Any adaptation should be available in as many countries as we have readers. And why now? Because we miss watching romance that really is romance.”

Esguerra said the show will be steamy. The Mango Summer main characters are 36 and 28 years old, and they do get into some sexy situations in the book. We’re making sure we include those in the adaptation”

They are currently in preproduction and aim to start filming in early 2020. “We have Layla Tanjutco writing the adaptation,” Esguerra said. “She’s a screenwriter, who also happens to be one of the best romance novel editors working today.”

Bringing Fiona and Greg to life will be Gab Pangilinan and Gio Gahol. “Our community holds events twice a year where we invite theater actors to read scenes from our books, and Gab and Gio have been part of that for years,” Esguerra said. “They know how we write, and they perform the characters so well. They also have great chemistry as a screen couple—see their web series ‘Forever Sucks’ and Agay chose them as her book’s cover models, too.”

To help bolster the production of the web series, “Mango Summer” will be crowd-funded. Esguerra elaborates: “#romanceclass currently runs a website, a social media presence, and two annual events featuring live readings and actors—and all of those are crowd-funded. What we’re able to do has been supported largely by our readers and authors, and that’s why we’ve been able to make things happen, and work with people we trust, and design experiences we enjoy. Crowd-funding this web series was a natural move, but this is a larger project than all the others, so any extra help and interest is definitely appreciated. Info about the production is on our webpage and there’s a funding deadline on Nov. 30, but people can pledge at any time through the options provided.”

Should “Mango Summer” prove successful as a web series, Esguerra said they aim to follow it up with the adaptation of another of their novels. “We already have the second and third book we plan to adapt, all lined up. But #romanceclass has a listing of over a hundred books by now,” she said. “We can just keep going and going, really.”

As her novel is beginning its journey to web series, Llanera said: “It’s very affirming! I wrote ‘Mango Summer’ with Filipino #romanceclass readers in mind, so the community’s decision to adapt it into a web series showed that the book achieved its goal.”

As #romanceclass transforms one of their creations into a new, different form, Llanera recalls the message at the heart of her book: “Life is too short to base your happiness on other people’s expectations. No one else is responsible for your own life, so be kind to yourself. The least you can do for yourself is to choose your own happiness.”

For more information about “Mango Summer” and crowd-funding options, visit http://bit.ly/AboutMangoSeries on romanceclassbooks.com. The crowd-funding deadline is Nov. 30.