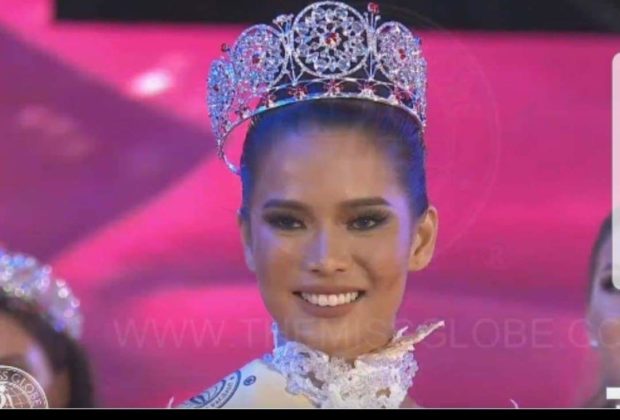 The crown went to Mexico’s Alejandra Diaz de Leon Soler of Mexico, with Carla Jean Lares of Trinindad and Tobaco as first runner-up.

Completing the top 5 are third runner-up Shauna Griffiths of Canada, and fourth runner-up Kristyna Malirova from the Czech Republic.

“We are so proud of your impressive performance, and the way you embodied the true beauty and elegance of a Binibini,” the organization said in a statement.

“You are truly a Filipina worth emulating,” it continued.

Bautista was among the top finishers in the preliminary swimsuit and talent competitions, and the “head-to-head” challenges.

Bautista, who was a dancer in high school and college, performed a tribal dance for the talent competition. During the swimsuit competition, she donned a black one-piece suit with a precariously low neckline.

The 26-year-old model from Los Baños, Laguna has an impressive pageant journey.

After bagging the Miss Los Baños crown in 2013, she went on to win the Binibining Laguna title in 2014, which took her to the Mutya ng Pilipinas pageant in 2015 where she was proclaimed Mutya ng Pilipinas-Asia Pacific International.

For her first international pageant assignment, Bautista successfully won for the Philippines the 2015 Miss Tourism Queen of the Year International crown in China.

Bautista said she is “more driven and motivated” for her Miss Globe journey.

“I have to prove a lot more in this pageant, and this is the last pageant that I will be joining, so I’ll do my best,” Leren said during her send-off press conference at the Novotel Manila at the Araneta City in Quezon City on Oct. 2.

In 2001, then Bb. Pilipinas second runner-up Maricar Balagtas was sent to Istanbul, Turkey, as the national pageant’s first entry in the Miss Globe. She bested 75 other aspirants to become the first Asian to win the title.

In 2015, the Bb. Pilipinas pageant reacquired the franchise for the Miss Globe pageant, which underwent reorganization.

Bb. Pilipinas-Tourism Ann Lorraine Colis was sent to Canada, and eventually won the crown for the Philippines.