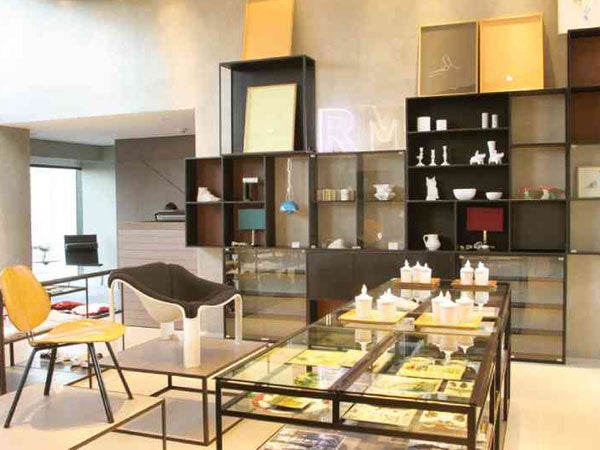 Jappy Gonzalez thinks out of the box–again

Fashion retailer Mark “Jappy” Gonzalez likes to think out of the box.

When this managing director of H&F Retail Concepts Inc. was conceiving the design for a second Homme et Femme with architect Eduardo Calma, his focus was to bring a new retail experience for customers without alienating them from the brand.

The new Univers Homme et Femme at One Rockwell at Rockwell, Makati, has an expressive interior architecture that is characteristic of Calma. However, it has the practicality of the flow of space and the clarity of merchandise display.

The branch is double the size of the 200-sq-m flagship store at Shangri-La Plaza mall, with a ceiling height of six meters.

“From fashion, we’re getting into the senses—what we see, smell and touch. Univers embodies that evolution. It’s a holistic approach to design and how you live,” says Gonzalez.

It has an expanded fragrance collection, which features Cire Trvdon bombs and candles, and Astier de Vilatte perfumes.

There are spacious dressing rooms and sitting areas where customers can sip their Lavazza coffee. There’s a waiting lounge near the cash register.

“This is the bay where you rest or work on your guilt or satisfaction,” says Gonzalez.

The design was inspired by a logo of a trail of vapor or cigarette which had to be covered. Thus, it has the non-color palette that has been the signature of Calma—white, black, beige and a hint of tobacco on the veneer walls.

The first thing that grabs attention are the curvaceous white beams from the ceiling that flow into brackets and become posts that anchor themselves on the ground.

The architect explains that these were allusions to billowing smoke. He says it could be interpreted as a metaphor for creativity or imagination that becomes practical.

Curves and beams of white gypsum board play against walls of graphite-stained veneer walls and gray porcelain tile flooring.

“The architecture defines how you show the clothing,” says Calma. “It shouldn’t overpower the merchandise. I wanted white, gray and black so that the clothes pop out. Whether they are colorful or in black, they accentuate the space.”

Calma is also proud of the design of the tables for the accessories, made from Styrofoam and polyurethane coating. The manufacturer merely used the Computer-Aided Design file and processed it in the 3D cutting machine, eliminating the molding and cutting processes.

The highlights of the stores are the translucent lightbox podium for the new designer pocket collections, and a curving post that suggests smoke from the ground at the center of the store.

It helped that Calma has been a longtime shopper of Homme et Femme, what with his Comme des Garçons wardrobe.

“Ed was the form, we were the function,” says Gonzalez. “We were very exacting about how things were going to be displayed, and there would be room for expansion. If I don’t want to show this merchandise here today, I can show it there tomorrow. That’s how we do things… The merchandise is strong that you have to revisit.”

It’s been 16 years since the first Homme et Femme store opened its doors. Gonzalez and his colleagues wanted to offer alternative, albeit, conceptual, designers. He said that the store has been very clear with its vision of providing merchandise that set direction.

“We didn’t make money in the first few years. The market wasn’t ready yet,” he recalled.

Still, it was business as usual. “You have to believe in what you do,” Gonzalez says. “When you stick to it, you reap the benefits. I’ve seen stores that tried to do something else by trying to please the market. In the end, it’s not them. And so, they couldn’t thrive in that manner.”

He describes the store’s style and identity as elegantly restrained and intellectual. “We’ve always been modern which is not just for today, it’s also for tomorrow,” he says. “Our brands are timeless. They pertain to a particular style not a trend. If you buy Comme des Garçons 15, years ago, the integrity and relevance are the same as today.”

Although all the lines are available worldwide, the selection is very specific for the market.

“How you see the labels here will be different elsewhere,” he says. “The local market is more practical. If I am going to buy something expensive, I make sure it’s going to be used in more than one occasion.”

On buying trips, Gonzalez determines if the brand or styles suit their identity. “The next step is to make them work as we buy for a specific clientele. I think about how they love and what they do.”

“That’s a starting point. Otherwise, you wouldn’t know what to do with the clothes. Either it would be too strong for you or you won’t understand it,” says Gonzalez.

He describes Jil Sander as “one of the most directional labels… [which] defies aging because it will always be that way.” “It’s for a more powerful women who don’t need praise,” he adds. “How many woman can look beautiful and not want a compliment? If you want something va-va-voom, go with Mouret. It’s for the red carpet and a scene stealer. But you need the figure for it.”

Zero + Maria Cornejo is for the “more confident woman.” “The dress is feminine yet one doesn’t have to be a 36-26-36. It’s relaxed yet alluring.”

Nicolas Ghesquiere of Balenciaga always refers to the past, Gonzalez says. “The conceptual artist in him reveals the strong shapes. By heart, the design looks futurist. He does it with clarity of vision and lightness.”

Meanwhile, Rick Owens is for the man “who doesn’t care about compliments because the clothes show who he is.” Comme des Garçon is “for those who don’t usually wear a suit.”

A.P.C. is for the younger and more adventurous wearer. “It’s not the item itself,” Gonzalez says. “You have to style it and let the personality come out. If you expect this garment to prop you up, A.P.C. is not the right thing to buy. It needs a stronger, funkier personality. Otherwise it would look bland.”

Other strong labels such as Lanvin and Dries Van Noten are in the flagship store.

Both stores have nearly equal selling space. The only differences are Univers’ lofty ceiling and the new Comme des Garçons Black shop-in-a-shop concept with its black cubicles.

Univers is one of the few stores in the world to carry this concept. The label presents its quirky styles in alternative materials and the prices are more pocket-friendly.

Univers has introduced Filipino designers with a global standard. Melissa Dizon’s Earth collection is for a younger clientele unconventional tastes.

Jewelry designer Wynn Wynn Ong’s special collection is designed to complement Univers’ aesthetics. Gonzalez challenged her: “What would a modern woman wear with a Rick Owens gown? You can’t wear Van Cleef and Arpels. What do you accessorize with Jil Sander? You don’t use Cartier. It’s more suited for Dior. What about Roland Mouret? The jewelry has to be powerful.”

Ong’s first collection features minaudieres, made of resin, fiberglass and pulp, and silver cuffs, both suggestive of corals, and coated brass sea shell pendants. They show virtuosity of Filipino handiwork. These pieces will be sold bespoke. The client can choose the color and attachment and it will ready in two weeks.

“We’ve always been very directional and very modern in every way we could convey, visually speaking. Still, we’re rooted in the past,” Gonzalez says, pointing to John Derian’s glass art paper weights in the new home section. They are inscribed with virtues such as “courage,” “peace,” “understanding” and gentleness.”

“They’re the fallen fruit of the Tree of Temperance. Apparently, it bears fruits like these,” he says in jest on the sellout collection.

There are period lamps and pieces by such designers as Arne Vodder, Oswald Borsani and Pierce Paulin. “We chose vintage furniture because history is saying that this was done 40-50 years ago and it looks as good as it is. Anything that you buy from us will stay with you.”

Gonzalez points out that the best compliment he has received is that the store is not for everybody. “When you try to please everybody, you become like the rest,” he says. “There’s no point in being anybody else. The name of the game is individuality.”