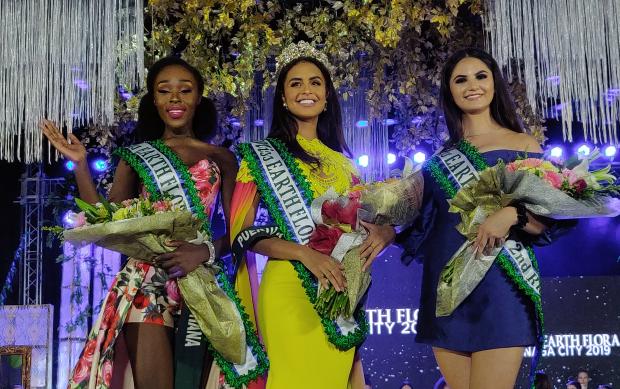 Puerto Rico’s Nailys Pimentel (center) wears her crown as “Flora of Naga City” at the event’s culmination. With her are first runner-up Abena Appiah from Ghana (left) and second runner-up Hilary Islas of Mexico. (Photo by Armin P. Adina / Contributor)

NAGA CITY, Camarines Sur, Philippines — With her charm and grace, Neilys Pimentel of Puerto Rico enthralled Nagueños and bested 84 other delegates for a special title awarded in an auxiliary event days before the coronation night of the Miss Earth 2019 pageant.

Pimentel was proclaimed “Flora of Naga City” in a program with the same title staged at the Jesse M. Robredo Coliseum in Naga City, Camarines Sur, on Tuesday, Oct. 22.

The program also featured some preliminary competitions for the different groups of Miss Earth delegates.

As in the previous years, the Miss Earth pageant divided its delegates into three groups — Air, Water, and Fire.

Bolivia’s Fernanda Vaca Pereira was the friendliest among the ladies in the Fire group. She was followed by Armenia’s Rippi Sargsyan and Sretsirisuvarna.

Among the delegates in the Water group, Paraguay’s Jociani Repossi was voted the most amiable, followed by Serbia’s Ljubica Rajkovic and Vietnam’s Hoang Thi Hanh.

The program had a few hitches. For one, it started two hours later than the announced schedule of 7 p.m.

Insiders said the contestants weren’t able to rehearse on time because they needed to have the stage completed before giving instructions to the delegates.

When the contestants arrived at the venue for their rehearsals, the stage was still being set up.

The opening number was also interrupted twice because of power outages. Another insider disclosed that the generator sets were not able to sustain the energy requirements of the program.

The Bicol leg of the 2019 Miss Earth pageant was the only event outside Metro Manila with all 85 delegates included. The other provincial legs of the competition were split into three groups.

Before heading to Naga City, the ladies went to the Misibis Bay Resort in Bacacay. They also went to the towns of Pili and Libmanan in the province of Camarines Sur.

The three-day leg was organized by the Manila Archizonian Chapter of the United Architects of the Philippines, with the local government of Naga City, and former Camarines Sur Provincial Board Member Carlo Batalla.

The 2019 Miss Earth pageant will hold its coronation ceremonies on Oct. 26 at the Cove Manila club at Okada Manila in Parañaque City.

TV host Janelle Tee is representing the Philippines in the 19th edition of the Miss Earth pageant.